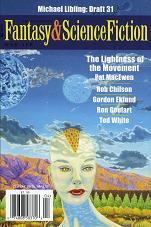 “Collar” by Leo Vladimirsky
“A Struggle Between Rivals Ends Surprisingly ” by Oliver Buckram
“The Lightness of the Movement ” by Pat MacEwen
“Hark, the Wicked Witches Sing” by Ron Goulart
“A Stretch of Highway Two Lanes Wide” by Sarah Pinsker
“Byzantine History 101” by Albert E. Cowdrey
“Albion upon the Rock” by Daniel Marcus
“Apprentice” by Jon DeCles
“The Uncertain Past” by Ted White
“Butterscotch” by D. M. Armstrong
“I Said I Was Sorry Didn’t I” by Gordon Eklund
“Our Vegetable Love” by Rob Chilson
“Draft 31” by Michael Libling

The March/April issue of Fantasy & Science Fiction contains 1 novella, 2 novelettes, and 10 short stories, each dealing with the theme that life rarely goes as planned. While the theme is interesting, most of the stories didn’t quite work for me—quite a few of the endings left me frustrated, and I struggled to get though the issue.

In “Collar” by Leo Vladimirsky, the US government has banned any products not produced in America, but instead of promoting domestic growth, the policy has led to a fleet of factory ships that float just off the coast. Tom is a guide, helping job-seekers brave the frozen water and avoid patrol ships on their way to find a way to feed their families. He’s already made a deal with the local patrol to betray his next client, and though he does feel some guilt about the arrangement, he doesn’t let his remorse stop him. Throughout the story, Tom feels powerless, and that impotence resonates, but there’s also no sense of resolution at the end.

Treya, the main character of “A Struggle Between Rivals Ends Surprisingly” by Oliver Buckram, makes her living translating for merchants who wish to trade with a race of beetles. Their communication is staged in a series of operatic plays that she can mimic on her pipes. But a former-lover-turned-competitor changes the story that she’d planned, and they end up somewhere unexpected. The twist at the end invalidates all of Treya’s work throughout the story, and left me frustrated.

Shannon wants to be a dancer, but she’s not able to keep up with the competition in her classes, so she signs up to help an anthropologist, Niera, study an alien species that dances as part of their mating ritual. In “The Lightness of the Movement” by Pat MacEwen, Shannon dons a suit to blend in with the aliens and beams the information up to her mentor in orbit. But things get complicated when she bonds with an adolescent alien and then decides to help him and his siblings survive the death of their father. The world is compelling and the aliens are neat. Shannon was active and engaging, but her lack of growth made the ending feel flat.

In “Hark, the Wicked Witches Sing” by Ron Goulart, Hix is a B movie writer, and when a budding starlet comes to him for help, he leaves his typewriter behind to investigate a coven of witches. The piece has a fun tone, but the resolution was too deus ex machina, which made the story feel pointless.

“A Stretch of Highway Two Lanes Wide” by Sarah Pinsker opens when Andy wakes after a farming accident to find that his arm has been replaced by a prosthetic. As he works at getting used to his new appendage, he realizes that the arm thinks that it’s a stretch of road in Colorado. It’s a unique concept, and the prose is beautiful. As Andy deals with his new arm’s sense of self, he also gains more understanding and acceptance of his own place in the world.

Albert E. Cowdrey tells the story of Terrence’s attempt to manipulate his fiance’s unpleasant grandfather into financing their child in “Byzantine History 101.” I appreciate the acceptance of gay marriage in the piece, but the omniscient point of view and unsympathetic characters kept this one from really clicking for me.

In “Albion upon the Rock” by Daniel Marcus, a multi-dimensional index called Brown encounters a colony ship with a damaged memory, then lets it continue on. Inside the ship, Jamal follows the surviving colonists’ self-imposed code of life by climbing to the heart of the ship after his daughter is born. The dual nature of the narrative makes the opening a bit hard to get through, but the two parts worked well together.

In “Apprentice” by Jon DeCles, the local wizard asks for a servant in exchange for dealing with the village’s gryphon problem. Dafyd, who’d passed from his abusive parents to the abusive ostler, finds himself selected. He grows up in the wizard’s care, then accidentally unleashes the gryphon that led him to the wizard’s home in the first place. This is another story where the ending fell flat—the story didn’t end so much as stop.

“The Uncertain Past” by Ted White opens with a time traveler witnessing the J.F.K assassination, but the president survives the attack. The team investigating time travel all take individual trips to observe historic occasions, and they all see different versions, none of which match the recorded facts. But then the department’s budget gets cut and two characters travel back to the Titanic together and find themselves trapped. The story ends just as it finally feels like it’s starting.

Arthur and Alexis aren’t sure if they want a child, but then Alexis realizes that she’s pregnant the same day that one of the mysterious Travelers, mute, dust-like creatures with human shapes, starts walking across their lawn daily. In “Butterscotch,” D. M. Armstrong tells the story of Arthur’s struggle to cope with the idea of being a father while his wife fears that his doubts are drawing the traveller to them and making her ill. Her mother moves in and plays on her doubts, but in the end Arthur realizes that doubts are things to be accepted and lived with, not shunted off. I liked the core idea of the story, and the descriptions are lovely, but the pacing throughout was a bit slow and the end felt rushed.

“I Said I Was Sorry Didn’t I” by Gordon Eklund is a stream of conscious diatribe from an unsympathetic man who is somehow responsible for the encroaching end of the universe. After his fat wife (it is important that the reader understand that she is fat) changes the locks, he visits his three sisters, who each have a different perspective on the end. The situation might have been interesting if the character had been less loathsome, but I had a hard time getting through the story.

“Our Vegetable Love” by Rob Chilson is a story about love between a grandfather and granddaughter. The wizard of Edgebatan has vanished, but has left a forest of soul-sucking trees. Some members of the community allowed the trees to take them, and now live on as tree versions of themselves. Roger’s granddaughter, Agnes, makes him doubt his humanity, but when she’s in danger, he acts and reminds himself that within his new wooden body, his soul is still human. This is another one where the pacing dragged, but the story worked overall.

“Draft 31” by Michael Libling has some pacing issues, but the creeping horror that grows as the piece goes on pays off at the end. Doc Caplan returns to his childhood home with his wife and kids to be a country doctor, but when an old flame brings her disturbed son for counseling, the boy reveals that he remembers a different version of the world.