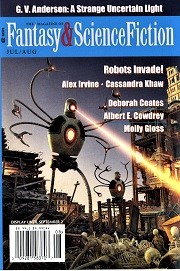 “Mighty are the Meek and the Myriad” by Cassandra Khaw

“Girls Who Never Stood a Chance” by Deborah Coates
“Lacuna Heights” by Theodore McCombs
“A Strange Uncertain Light” by G. V. Anderson
“Nice for What” by Dominica Phetteplace
“The Legacy” by Albert E. Cowdrey
“The Slave” by Andrej Kokoulin (translated by Alex Shvartsman) (non-genre, not reviewed)
“Planet Doykeit” by Eliza Rose
“The Everlasting Humming of the Earth” by Molly Gloss
“The Legend of Wolfgang Robotkiller” by Alex Irvine

The July/August issue of F&SF has ten first publication stories, including four novelettes. Tangent Online did not review one of the novelettes as it contained no speculative genre element.

“Mighty are the Meek and the Myriad” by Cassandra Khaw

Khaw’s SF short is set in a future recovering from a robotic war. Harold represents the American interests and Henrietta the British as they begin negotiating a lasting peace between the surviving countries.

The British try to ‘rehabilitate’ the war robots, giving them new roles. But it’s all window dressing, the people don’t like them much and have no empathy for their fate. And the robots realize this, making their own plans.

This was an interesting tale that let the reader unravel for themselves just what the story was about. But taking this discovery process to the extreme has also produced a slow-moving story.

“Girls Who Never Stood a Chance” by Deborah Coates

This compelling fantasy novelette tells the story of several girls, who are downtrodden, unappreciated, and abused. Their lives change when dragons suddenly arrive to terrorize their state.

The government imposes a state-wide evacuation, but for a variety of reasons their families or boyfriends leave these ‘loser-girls’ behind. Shade, who was hiding from her murderous brothers, is a natural hunter. True, who’s learned how to keep out of her stepfather’s abusive reach, helps her little sister. And Bess is just plain elusive.

Then things get worse, when a group of misogynist boys come back into town to hunt the dragons, and maybe have some fun on the side.

What a wonderful plot this was. One that grabbed from the start and never let the reader relax or put down the story until it was over.

A litigation lawyer is struggling with memory gaps in this climate-based SF short. Andrew represents Adelp Corp, a technological leader in brain implants that control access to the net. These implants record and save all thoughts and search results, unless the user drops into private mode, which can cause gaps.

Seeing a psychiatrist for his memory delusions, struggling in his marriage, and realizing there’s a lot he cannot fully recall, Andrew wonders what’s driving him. He lives in the now flat city of San Francisco, unsure why it has ‘hill’ in so many street names but he’s sure it has something to do with all his problems.

The prose pulled in the reader as it slowly revealed the new world that was still adjusting to new climate realities.

Anne has just married Merrit in this fantasy novelette. He married to recapture the youth he lost in the First World War, she married to escape the ghosts she sees in her southern hometown. She is a chime baby, born during the ringing of the church bells and imbued with a special talent for seeing spirits.

But when they arrive for their honeymoon in Yorkshire, Anne finds many more ghosts and harrowing sights. The hotel they stay at has a checkered past, including a time when it was an asylum a hundred years ago. It is haunted by children killed by a sadistic doctor who experimented on other chime babies.

Merrit is haunted by memories of his two brothers, killed on the same battlefield where he fought. Can Anne come to grips with her bizarre talent and find its true purpose?

This plot kept the intrigue going throughout the build-up and left the final scenes as a mystery with yet another twist. An enjoyable story to read, but not one that added to its genre.

“Nice for What” by Dominica Phetteplace

This short SF tale describes a near future where Luliana is an influencer on the net. In this future everything that happens is evaluated by bots evaluating every facial expression, muscle twitch, or pheromone essence.

Luliana has cancer, the five-percent-survival-rate kind, she has no money for the drugs and so she gets herself sponsored by the best drug company. But every time she goes on TV to show how well she’s recovering the bots say she looks and acts sicker, until the sponsor fires her. Can she find the right gig, in this influence-happy world, to survive?

This was a curious short story; the prose was okay and the plot interesting.

“The Legacy” by Albert E. Cowdrey

This horror fantasy novelette tells the story of a young head-strong woman, Maggie, who inherits an ill-gotten fortune from a criminal father she never met. The one provision is that she must live in her father’s massive isolated ‘cabin’, in West Virginia, that may be haunted.

Maggie leaves her ever-angry Cajun boyfriend in New Orleans and goes to live in West Virginia. Her search of the huge house reveals an attic where her father, Magnus Liard, kept original paintings of himself, dressed in a variety of period costumes she finds…strange. But Maggie adapts to life in the house and soon finds a new boyfriend, a mute blond with unlimited energy for life. But things aren’t right, and a visit from her ex-boyfriend brings things to a sudden head.

This story included a lot of mystery to keep the reader interested, though the speculative elements don’t manifest themselves until the end.

Rose’s SF short follows the trials of a Jewish colony settling a distant planet after more than one hundred and forty years of space travel to reach it. The planet, Doykeit, is small and tide-locked to its sun, creating a narrow habitable band. During the arduous journey, the people have developed new beliefs around their hair, and now rely on seers reading the whorls of hair on each person’s head to determine that person’s place in society.

Now, after seventy years of colony building, the people are growing their population through selective breeding. The hair of two friends, Ikva and Zishe, are examined and Ikva chosen for breeding while Zishe is sent to work the fields. How will these two inseparable friends deal with their designated roles?

The story was difficult to follow because it used cultural idioms unknown to this reader. This challenge, coupled with a slow-moving plot, made for a tedious read.

“The Everlasting Humming of the Earth” by Molly Gloss

Joyce’s body is in tune with the Earth in this short and engaging fantasy. Her body tremors like a tuning-fork when an earthquake is about to hit. Only, she doesn’t know where it will hit in the world, and, as the experts point out, what’s the point of saying when if you can’t also say where.

After decades of being treated as a freak she seeks peace by moving away from California and using acupuncture to relieve her stress. But is there a different way for her to live with this bizarre affliction?

This was a story that engaged the reader from the start, a nicely crafted character-based story with a thoughtful end.

“The Legend of Wolfgang Robotkiller” by Alex Irvine

This SF short is set in a near future after giant robots have killed most of humanity and pushed the rest back into survival mode. No one knows where the hundred-foot-high robots came from, but legend has it that Wolfgang can kill them when everyone else is limited to hiding from them.

Justin lives with a pod of four others trying to scavenge for food. The legend of Wolfgang keeps the pod going. But what if you meet the legend? Can a real human ever live up to such a legend, no matter how gifted they are?

An interesting throw-back plot to the SF of the fifties and sixties, with a different, more modern, perspective.