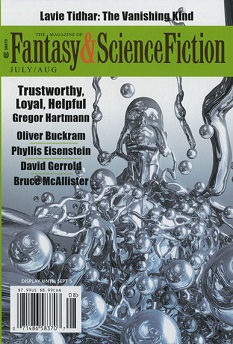 “The Desert of Vanished Dreams” by Phyllis Eisenstein
“Spells Are Easy If You Have The Right Psychic Energy” by Dominica Phetteplace
“The Vanishing Kind” by Lavie Tidhar
“An Open Letter to the Person Who Took My Smoothie from the Break Room Fridge” by Oliver Buckram
“Last One Out” by K. B. Rylander
“Vishnu Summer” by David Prill
“Killer” by Bruce McAllister
“Jesus Has Forgiven Me, Why Can’t You?” by Betsy Phillips
“The Thing on the Shelf” by David Gerrold

Jimmy knows that he’s a glorified button pusher at Materials Science Corporation in Gregor Hartmann‘s “Trustworthy, Loyal, Helpful,” but a little credit for all the hard work isn’t too much to ask, is it? After all, without Jimmy, Vik and Reed wouldn’t have the commercial success of ColorFall and all its spinoff products. Of course, they wouldn’t have the environmental disaster that followed, either, so maybe taking some credit isn’t exactly what Jimmy wants.

There are a lot of complicated scientific explanations peppered throughout “Trustworthy, Loyal, Helpful,” but it doesn’t take away from the fundamental literary quality of the story itself. Hartmann writes a fun and relatable first person protagonist in Jimmy, and brings to life Vik and Reed through their colorful and opposing multi-layered personalities. The pacing is snappy and at no point does the story seem to drag. The ending almost passes by too fast to notice, but Hartmann leaves small details throughout the story to snag the reader just long enough for everything to click into place satisfactorily at its conclusion.

Alaric is a simple minstrel in “The Desert of Vanished Dreams” by Phyllis Eisenstein and he’s content to stay that way. Taking the difficult paths through life, even those that have him traveling in the thirsty desert with a merchant caravan is what gives him inspiration for his songs. After the caravan detours to an ancient city as a last resort for a source of water, Alaric is ready to make a new song out of the experience. But when the caravan loses a man to the eerily empty city, Alaric and the caravan master must plunge into its depths, learn its secrets, and find a way out of it alive.

The story of Alaric is a long running one, yet Eisenstein leads even the newest readers seamlessly into her world, giving away bits and pieces of Alaric so that nobody becomes lost. Working on the back of a well established world and mythos, “The Desert of Vanished Dreams” is a richly vivid story that begs readers to explore the past exploits of Alaric, even if they aren’t necessary to the understanding of this most recent chapter of his adventures.

Hruta knows that she’s not a good person in “Spells Are Easy If You Have The Right Psychic Energy” by Dominica Phetteplace. The trouble is that being a good person is hard, especially when you’re trying to solve all your problems with magic. She’s got the technique right and her spells work most of the time, but somehow she never ends up entirely satisfied with the results. There must be something more to magic—or more to fulfillment—than the quick satisfaction of immediate desires.

Phetteplace crafts a brilliant, slightly non-linear narrative in “Spells Are Easy” that is grounded in both the real and the fantastic in equal proportions. In explaining each spell, Hruta also explains a little piece of herself, her history, the reasons why she is unhappy, and the ways she is trying to change. The story highlights the spiritual struggle of being human, and the ways in which we can release ourselves from that struggle—with or without the use of magic.

Gunther Sloam is a romantic in a world with no more heart for romance in Lavie Tidhar‘s alternate history, “The Vanishing Kind.” When he receives a desperate message from Ulla, an old fling, that reminds him of the old sort of films that he himself used to write, Gunther travels to a post World War II ravaged London in which the Nazi’s have won, thinking of nothing more than rekindling an old flame. But when he arrives he finds Ulla conspicuously vanished, the Gestapo nipping at his heels, and a mysterious dwarf pulling an unknown number of strings from the sidelines. Gunther is far from the lead in a romantic motion picture and reality is a lot colder and meaner than he is prepared to accept.

“The Vanishing Kind” is an interesting mix of noir and alternate history. True to the noir genre, none of the characters are who they appear to be, and the mystery keeps spiraling deeper into the hole and all the while the reader is begging Gunther to just get on the transport and go home. But of course he must uncover each intricately connected layer of his missing paramour and the readers follow his every footstep with nail-biting anticipation.

There are some kinds of evil that are forgivable amid an alliance of super villains and some that are not. In “An Open Letter to the Person Who Took My Smoothie from the Break Room Fridge” by Oliver Buckram, stealing a smoothie is most certainly not one of the forgivable crimes. Professor Nemesis only has so much patience he can extend to the thief. When that runs out, all bets are off.

Buckram is a proven master at short, witty and hilarious fiction. “An Open Letter” is no different. Told through an email format, the reader gets a very sharp look at the personalities of each of the characters in this quick, funny story of pure evil.

Filip knows a lot of stuff about a lot of things in “Last One Out” by K. B. Rylander, but music isn’t one of them. If it will make Ella happy, however, he’s willing to learn musical appreciation, no matter how long it takes. And Ella could use a bit of lifting. After the quarantine she’s been alone for so long that she just might be the last human left on earth. Fortunately Filip’s connection to a network of other bots may help her find other survivors of a deadly virus.

“Last One Out” is a bittersweet story of robot affection and self-continuance. As Ella and Filip’s relationship unfolds on the page, the reader gets a strong sense of their emotions, and the lengths they will go to make the other happy. The ending, while reverberating the same loneliness that pervades throughout the story, nonetheless is hopeful and optimistic, even if the reader is unwilling to let go of the harsh facts that are the undertone of the world in which the story is set.

Audrey’s mother has the peculiar habit of painting the future. Her future to be exact. Only what she paints isn’t exactly clear. Audrey is able to decipher her mother’s strange murals only after the events have come to pass, when she’s brave enough to look at them at all. When, in “Vishnu Summer” by David Prill, a motorcade rolls by the farm one day bringing a strange three-armed man into her life, Audrey has to wonder if he is connected in any way to the new image of Vishnu her mother has added to the barn wall. What it can all mean is a mystery to Audrey, as her small town is swept up in the excitement of a malformed stranger, a town fair, and a murder trial.

Prill marries small town Midwestern life with a touch of eastern mythology and a dash of magic, and stirs in a murder mystery to round it all off in “Vishnu Summer.” As the narrative unfolds, the reader becomes intimately familiar with Audrey’s world, her strange circumstances and the pull that draws her closer to the three-armed man. While the reader always feels there’s something slightly amiss, Prill sets up the corn maze of the plot in such a way that readers are left second guessing their own instincts and feeling the weight of events and the heat of summer right there beside Audrey.

Bruce McAllister‘s “Killer” is a very short story, and a continuation of an earlier publication. There is too much that could be spoiled by giving a summary, but in this world, angels and demons have tumbled onto Earth, bringing their war with them. In the end, it is the angels who win, but who is truly the face of evil in this conflict remains to be seen. Short and to the point, “Killer” gives readers only a teaser into a world that is much larger than this story can contain, and much to think about regarding the nature of evil.

There are a few things a guy just shouldn’t do. Cheating on his wife is one of them. Lying about being forgiven by Jesus is another. So when Larry does both in “Jesus Has Forgiven Me, Why Can’t You?” by Betsy Phillips, Betsy knows that there’s only one way to even the score: through an amateur wrestling match with the Savior Himself.

“Jesus Has Forgiven Me, Why Can’t You?” is everything that Christian fiction should be: it deals with the real life failings of ordinary people, it has just the right amount of Christ’s message without sounding trite or preachy, it feels real, and it’s incredibly funny. Phillips casts Jesus as a man before a divine, to give readers something that comes close to Buddy Christ. Written with undeniably witty prose and very clever breadcrumbs of information, “Jesus Has Forgiven Me, Why Can’t You?” is a great piece of religious magical realism that explores our personal relationship with the divine, and with each other.

Some things are better left alone. In “The Thing on the Shelf” by David Gerrold, that thing is a Stoker Award. To anyone outside of the horror community, the award is an honor, a mark of prestige. But for those who live and breathe horror, the Stoker—the creepy little stylized haunted mansion with its open and closed door—represents something else. It’s a heavy cross to bear, but someone must do it to keep that distinctly horrific, ominous presence from accumulating in too great an amount in one place.

“The Thing on the Shelf” is a long piece, filed with tangents, and tangents within tangents, and a Lovecraftian antagonist that is never fully explained or revealed. The protagonist is the author himself relaying the events of the horror convention, his subsequent win of the award, and the strange events that occur afterward. The story thus has one foot in reality and one foot outside of it. It is difficult to wade through all the ramblings that seem to have no connection to the heart of the story, but in the end the author assures readers that they all share a connection—if readers are able to find it.