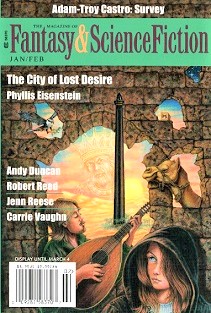 “To the Beautiful Shining Twilight” by Carrie Vaughn

“The Province of Saints” by Robert Reed
“Joe Diabo’s Farewell” by Andy Duncan (reprint, not reviewed)
“The City of Lost Desire” by Phyllis Eisenstein
“The Right Number of Cats” by Jenn Reese
“Survey” by Adam-Troy Castro
“Blue As Blood” by Leah Cypess
“The Washer from the Ford” by Sean McMullen
“Tactical Infantry Bot 37 Dreams of Trochees” by Marie Vibbert
“Fifteen Minutes from Now” by Erin Cashier
“The Fall from Griffin’s Peak” by Pip Coen

“To the Beautiful Shining Twilight” by Carrie Vaughn starts out with Abby finding some dead leaves in the till of her coffee shop, a sign to her that Airen, one of the Faerie and with whom she had a relationship years before, has come back. Of course, Airen hasn’t aged and is there to offer her an adventure. It takes the traditional take on the Faerie and shows some of the ramifications to that concept. I liked the characters and situation and Abby’s dilemma and resolution.

Robert Reed contributes “The Province of Saints,” where the narrator is called into investigate a terrible massacre in his old home town. Most of the Billings family were killed horribly at a birthday party. The Billings were known to take a sadistic delight in humiliating and abusing people without being punished for it, and the answer to their deaths might lie in Mary Sue Billings, who managed to escape her family’s cruelty. I found the characters well drawn, and especially liked the resolution, where the cause of the deaths is due to an unexpected source.

Phyllis Eisenstein has been contributing to Fantasy and Science Fiction for years, often with tales of Alaric the bard. “The City of Lost Desire” continues the story with an older, more mature version of the character. He is part of a caravan to what might be the oldest city in the world, bringing various trade good, plus something called “The Powder,” which is some type of drug that the king desires. Alaric gets caught in the court intrigues and through wisdom and wit manages to save his skin. First-class high fantasy.

“The Right Number of Cats” by Jenn Reese is a flash fiction piece about Grace, who suddenly finds an extra cat coming out of nowhere to live with her. Kind of a slight piece, and I’m not entirely sure what it is meant to signify.

Adam-Troy Castro‘s “Survey” is a chilling little story about Steph, who’s being asked to answer a survey to earn a little money. The questions start out innocuously and slowly get darker and darker as the survey becomes a far-too-real exploration of the trolley problem—and more. The twist at the end makes this into a very creepy story about human nature.

“Blue as Blood” takes its start from imagining an alien race with a peculiar outlook. The Pinj are masters at medicine, but have one weakness: an antipathy bordering on madness against the color blue. Nina was born on the Pinj world because of a potential illness and her family is now moving back to Earth, but she is now fully Pinj in her feelings when she sees the color; it makes her sick. Leah Cypess isn’t content to just lay the situation out, but uses it not only to see Nina’s distress, but to expand it to go into surprising and scary directions. Definitely an excellent story, with a powerful ending.

In “The Washer from the Ford” by Sean McMullen, Peter stumbles upon a woman who was murdered when he was out on a jog. Bad enough, but when he does his laundry, he runs into a mysterious woman who no one else can see and is washing the victim’s clothes. The woman is magical and reveals to Peter that he is under a curse and gives him the ability to perceive exactly what it is. It seamlessly integrates the magical revelation with the murder and travels a plot path that is strong and surprising.

Marie Vibbert contributes “Tactical Infantry Bot 37 Dreams of Trochees,” where the title character is part of a battle force in an unending war and who begins to fall in love with words and phrases and eventually begins to recite poetry, which contrasts with the meaninglessness of the war. An interesting take on an antiwar story that probably would be better appreciated by someone more attuned to poetry.

“Fifteen Minutes from Now” by Erin Cashier is about the interrogation of a prisoner by a narrator who can be sent back in time 15 minutes. He keeps going back, learning more and more about the prisoner with each trip. There’s a bit too much cruelty for my taste and I find the story too talky. While the earlier “Survey” works well with just conversation, this one reads as a mad scientist monologuing about his evil plan.

Pip Coen‘s “The Fall from Griffin’s Peak” is the tale of Rosemary Hunt, a thief by trade who is lured into an almost impossible task: to steal a griffin’s tear necklace, which is famed for its ability to cure any illness. Rose is the type of character I like to see—smart and prepared, but not so clever that she can see what might be developing. It’s a fast-paced tale that never lets up on its imagination, with a powerful final kick.

Chuck Rothman is the author of Staroamer’s Fate and Syron’s Fate.