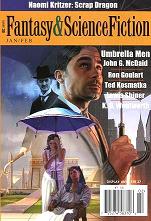 “Small Towns” by Felicity Shoulders is set in France, after the first world war.  Jacques Jaillet is a toymaker, newly returned to his hometown.  He finds it in a shambles.  At the same time, Aude Perrot is delivered of a baby girl, a child only a few inches high, but fully formed.  While Jacques creates a model of his village as it was, Aude names the baby Fleur, and keeps her a secret.  The baby grows into a young woman.  When Aude discovers she’s dying, she packages Fleur up to send to her parents.  Unfortunately, the package ends up in dead mail, in Jacques’s village.  Fleur frees herself, only to be chased by Jacques’s cat.  She finds his shop, and makes her home in his model village.  But Fleur isn’t content.

Two stories bump elbows in this plodding Thumbelina tale.  It has a pretty setting, but with little plot and cardboard characters, most of its potential goes unrealized.

The protagonist in “The Comfort of Strangers” by Alexander Jablokov is a sperm collector.  He deals with the males of several different species, all while playing host to a Greloid, a small creature that has attached itself to his ribcage, while it works its way through a sexual cycle that takes months.

This story has solid entertainment value.  I loved the thought and detail put into the encounters.  Jablokov keeps variations on the same joke coming (pardon the pun), but doesn’t produce much of a plot.  I’d enjoy seeing this one more fully developed.  It could be great fun.

In “The Secret of the City of Gold” by Ron Goulart, the year is nineteen-aught-one.  Harry Challenge is in London to solve a double-mystery, a murder and an abduction.  He learns that a murdered professor had just returned from South America, and was in possession of a magical amulet.  It was reputed to allow its wearer to assume the form of a jaguar.  Harry soon finds himself in the company of old friends, and a few adversaries.  He hears rumors that the abductee is nothing of the sort, but rather, is in league with the murderer.  When Harry tracks them down, he learns the truth.

This tale has a nostalgic feel that goes beyond the period setting.  The pace is languorous, but doesn’t stall.

In “Maxwell’s Demon” by Ken Liu, the year is 1943, and Takako Yamashiro, an American citizen of Japanese heritage, has been deported back to Japan.  There, she is both victim and witness to heinous acts committed by Japanese and American troops.  Each side seeks to use her.  The Americans want intelligence, and the Japanese, to use her inherited knowledge of the spirit world to create a weapon.

I enjoyed the part of this that is about the spirits.  I wish it had been more the core of the tale, and less a sidebar.  Liu places a lot of emphasis on Takako’s gender, and on the thoughts of her captors.  Utterly passive, she calmly accepts the abuse heaped on her.  It gives the story a creepy, misogynous undertone.

Heather is the third sister in “Scrap Dragon” by Naomi Kritzer.  When her older sibling fails to return, it falls to Heather to confront the dragon that terrorizes their village.  Heather takes a thoughtful approach, and discovers a novel solution.

Written as a conversation between the storyteller and a discerning listener, this is an amusing send-up of the traditional fairy tale.

Alonzo lives in New York, with his family, in “Umbrella Men” by John G. McDaid.  The Umbrella is a special thing.  Though their neighborhood is rough, working-class, the crime rate is very low.  Alonzo credits the Umbrella.  He makes an effort to spread its shadow where he thinks it will do the most good.

This story drags along, introducing one character after another, but explores only the shallowest implications of its premise.

We’re back to WWII with “In the Trenches” by Michael Alexander.  Corporal Hans Ludendorff is entrenched in his bunker, when he finds himself making conversation with a kobold.  The bombs resume, the bunker is destroyed, and the kobold tunnels down, taking Hans with it.  Below, he finds a dying Frenchman named Pierre.  Hans discovers that the kobolds have brought them together to observe them, like lab rats.  With Pierre’s help, Hans learns the truth about the kobolds.

This is a good story.  Alexander takes an interesting idea and handles it with intelligence.

Aliens have moved into the neighborhood in “Alien Land” by K. D. Wentworth.  Foreclosures have left many houses standing empty.  The aliens appropriate them.  Though Mary-Christina is outraged over their arrival, with the encouragement of some of her more adventurous friends, she reaches out.  Mary-Christina finds something unexpected and welcome in her new neighbors.  When soldiers come to take the aliens away, she’s the one who goes after them, and who organizes the jailbreak.

Mary-Christina’s stint as an affronted housewife gives this an unfortunate, dated-sitcom vibe, but it’s still an enjoyable tale.

In “Canto MCML” by Lewis Shiner, Jack Evans arrives home to find his wife livid over a note in their mailbox.  It says the year isn’t 1950.  When a second note arrives, Jack knows who’s responsible for leaving them.  He confronts Marge, his former mistress, who insists she simply wants to shake up their dull lives.

I’m of the opinion that short fiction is uniquely positioned to offer insightful commentary on current issues.  Though I enjoy seeing a clever perspective, I want some exploration, and a plot that will stand scrutiny.  This tale is contemporary, but vague.  It leaves more questions than answers.

In “Mindbender” by Albert E. Cowdrey, Brown works as an agent for the government.  His main task is to track down an international assassin he’s christened “Mandrake” after an old comic strip.  His work is interrupted when he’s assigned to give Milo, a former Russian operative, a new identity.  Brown settles Milo in the small town of Moccasin Gap.  Milo has the ability to detect the surface thoughts of others.  Keeping him alive, even in Moccasin Gap, is more of a challenge than Brown expected.  When Mandrake appears, with some abilities of his own, things really become difficult.

This tale has a decent plot.  It’s perhaps ironic, given that the story is about a fellow who gets into the heads of others, that I found these characters dry and distant.  I just wasn’t drawn in.  It reminded me of a cold-war era potboiler.

“The Color Least Used by Nature” by Ted Kosmatka tells us about the life of Kuwa’i, on the island of Hiwiloa, north of the Cook Islands.  On this island a special tree grows; they call it the walking tree.  It’s light and strong, and the islanders use it for their boats, but they also recognize its magic.  Kuwa’i becomes a boat maker of renown with this wood, but his personal life is tumultuous.  Tied to the island, he makes some difficult choices.

This tale’s connection to fantasy is tenuous.  It’s a dry litany of events.  I found this to be the hardest story to get through.  Had I not been reviewing, I wouldn’t have bothered.