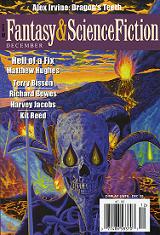 “Hell of a Fix” by Matthew Hughes

“Inside Time” by Tim Sullivan

“I Needs Must Part, the Policeman Said” by Richard Bowes

“Illusions of Tranquility” by Brendan DuBois

“The Economy of Vacuum” by Sarah Thomas

“The Man Who Did Something About It” by Harvey Jacobs

Human struggle is set in both fantastic and science fiction backdrops in this issue of Fantasy & Science Fiction. The theme linking the stories is decision – a character’s choice that affects him/her or others.

The heartache of unrequited love is blended with high fantasy in “Dragon’s Teeth” by Alex Irvine. A military captain named Paulus risks all for his queen in a quest to kill a dragon that injured her husband a long time ago. Irvine’s imagery is well-crafted and draws the reader into the story. Symbolism is evident, but not heavy-handed, and enhances the poignancy of the soldier’s decision at the end. That ending would be better if Irvine had concluded the story with Paulus returning to the queen and tying up loose ends with her and other characters earlier detailed.

An actuary’s dull life is interrupted when he accidently summons a demon in “Hell of a Fix” by Matthew Hughes. This story starts out as a tongue-in-cheek humorous parody of the relationship between humans and demons until a sharp twist turns religion upside down. The magazine is to be commended for publishing this story. The premise is bold, thought-provoking, and original. Although Hughes drags out the plot a bit too much at times, he utilizes strong imagery, detailed descriptions, and a relatable protagonist to show human nature in the hottest spotlight. This tale stands out in today’s literature where complacency is all too common.

A scientist’s experiment has unexpected consequences in “Inside Time” by Tim Sullivan. The aspect of believability is not obtained, even with realistic characters. The science is glossed over. Too much is expected for the average reader. The purpose of the time station is revealed at the end, but this leads to more questions than the revelation answers. The fate of the lead character, Herel, is not surprising at the end. The story is fast-moving and Sullivan’s skill is evident, making the reader long for a better example of this author’s work.

An elderly man is visited by several strangers while hospitalized, when he is offered an extraordinary opportunity in “I Needs Must Part, the Policeman Said” by Richard Bowes. In the story’s introduction, the magazine’s editor mentions that this work is actually slated to be the first chapter in one of Bowes’ upcoming books. Reading this tale will certainly make the reader want to purchase that novel. The story is written in first person with the protagonist being Bowes himself, adding to the originality. Bowes twists narrative into character development like an expert weaver. The ending is tied off in a perfect knot. The supernatural aspect is not the shock factor – humanity is – one reason why Bowes is a master storyteller.

The interaction between cultures is explored in “Bad Matter” by Alexandra Duncan, who writes in a unique manner – footnotes being an integral part of the story. Reading these notes as they’re given instead of waiting until the end enhances the culture clashes and interpersonal relationships more effectively. The plot flows well and the imagery pulls the reader in. Duncan portrays the alien women as subservient and victims of circumstance, unfortunate as this story is set about four hundred and fifty years in the future. The Earth woman is more evolved, but still seems backward, considering her timeline. However, that does make her relatable to today’s readers. This story stands out, not just for the strong writing, but that it lacks a hopefulness common in a lot of science fiction.

A man and woman find themselves in an unfamiliar situation in “Farewell Atlantis” by Terry Bisson. The Atlantis myth has been explored extensively – in books and recently on television in Stargate Atlantis. Bisson adds to the speculation in a novel way, a credit to his immense talent. Dialogue is crisp while description is in the background so as to focus the reader on the two characters. This story appears simple, but further contemplation shows the thought given to the plot which is credible, not an easy feat.

Unexpected results of the colonization of the moon are explored in “Illusions of Tranquility” by Brendan DuBois. This story again shows a bleak future. The strong characterization and surprise ending showcase the author’s writing talent, but the timeline is not believable – a man born in 1960 visits a fully colonized moon with first generation young adults. Even with the mention of the advancement of human longevity, the story doesn’t work. If not for that major flaw, this work would have been outstanding.

“The Blight Family Singers” by Kit Reed is an offbeat, humorous blend of a warped von-Trapp-family-type singers and a Waco-type cult. This fun romp is a nice respite from the other more serious stories in the magazine. Reed uses the relationship between a mother and son to show the worst of human nature. She utilizes the point of view of several characters to move the plot, which keeps the story fresh and light. This is a great tale by a master author.

A woman named Virginia volunteers to live on the moon in “The Economy of Vacuum” by Sarah Thomas. Afterwards, war soon breaks out, leaving her alone until she’s found years later. Thomas extrapolates current events well to tell a plausible tale. The time frame is not mentioned, adding to the credibility. Virginia’s life on the moon is heartbreaking, exacerbated more by what happens to her at the end. Vivid imagery and symbolism add an extra dimension to an already exceptional story. Thomas is a writer to watch.

“Iris” by Nancy Springer is the only Christmas story in the magazine and is also the shortest. The theme of a missed child at holiday time is tired, but Springer makes it interesting with a supernatural twist. She portrays an old woman’s loneliness with stark realism while tempering the reader’s feeling of pity for the woman, the mark of an expert writer.

An expert mechanic called upon to fix an alien ship makes a life-altering decision in “The Man Who Did Something about It” by Harvey Jacobs. The mechanic’s choice is unimportant – the story focuses on his struggle with destiny and the desire to do something about an indescribable it. The alien personifies the worst of humanity. The plot moves without an abundance of imagery, which illustrates the urgency of the situation. Jacobs gives the reader an excellent example of science fiction today.