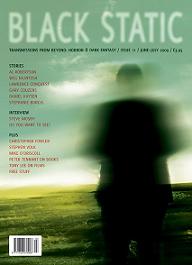 “None Had Sharp Teeth” by Will McIntosh

“The Likeness” by Lawrence Conquest

“Off with the Furies” by Daniel Kaysen

I really like Black Static from TTA Press for the same reason that I really like Interzone from TTA Press. It takes the genre, in this case dark fantasy and horror, and it provides a wide range of good stories. While I am not myself an avid reader of horror I enjoy dark fantasy immensely, and reveled in the strange and unsettling twists that these authors have provided to their stories.

“de profundis” by Al Robertson is a slowly building, relaxed and contemplative tale, whose pace is reminiscent of the tides and currents of the sea–which is a primary protagonist. It follows the life of a police diver who recovers a body from the Thames that turns out to be an unknown relative. As the truths of his own life and his own family slowly unfold, the protagonist is caught up in an almost Lovecraftian tale of beings from the depths. It must be said that Robertson’s creatures are somewhat more benign than Lovecraft’s, and yet regardless of their nature or purpose the transformations that they cause are nevertheless as disturbing.

The author investigates in his story questions of belonging, isolation, family, love, community and change. Though the story evolved into a more exotic and religious one than I had expected, with elements of Mayan sites and cult-like adoration, I found myself lulled by the language and the teasingly slow development of the intrigue into reading this relatively long piece. Whether or not you like it would be a matter of taste for the pacing and the very close third person perspective from which the tale is told. I found it to be an enjoyable read, if perhaps a tad longer than necessary.

“None had Sharp Teeth” by Will McIntosh gets filed under the “short, savage, effective” heading. McIntosh has created a suitably weird and frightening premise for his story, and involves a protagonist who jumps in it with both feet to the point where you find her terrifying in her conviction. The shortest of the works in this issue, I would really rather not say any more than this, because you could read it in the time that you peruse the magazine at a newsstand. Which, in this case, I would heartily advise you to do. It is sufficiently unpleasant and shocking to grab your attention, but does so without turning your stomach. Like a short sharp jab in the solar plexus, the story works perfectly.

The first thing that struck me about Lawrence Conquest‘s “The Likeness” was the language. It was rich to the point of leaving no noun or verb unmodified, often several times. Example: “The sun stabbed invasively through the angled slats of the window shutters opposite in coruscating blades of light, leaving isolated motes of dust hanging weightless in the air like insects trapped in amber.” So there you go. If you like writing like that, you will like Conquest’s style. For me it was a bit overdone, as it is any time that a story uses the verb “to fancy.” The story was also a bit heavy on obsessed narrators, fantastic dreams, and invasive nightmares. Like high fantasy needs orphan farm boys with untapped powers, stories in the New Weird style seem to require dreams and exotic urban settings. In this case, Kraków, Poland, which the author clearly knows well and portrays convincingly.

The story is narrated by an artist, who becomes obsessed with a woman he spies in a window near the market. He is eventually engaged by the wealthy businessman who is keeping her to paint her portrait, though her past and her very nature remain a mystery. The story unfolds in a way that I would describe as inevitable rather than predictable, which is a tribute to the writing. Whether or not you like it will depend upon your enjoyment of this style of writing, a treatment of Kraków like Miéville’s London, and stories that finish before you really understand what is going on.

As we all know what dish is best served this way, we all pretty much know the theme of Gary Couzens‘ “Served Cold.” If you like your horror visceral, graphic, brutish, fast and ugly, you will find this impossible to put down. It is the classic and infinitely repeated trope of revenge from beyond the grave, yet Couzens does it in a way that reaches into your guts and forces you to read on until the end. If you are squeamish, this is not a good thing.

A young woman, who has the tragic flaw of an unusually active sex life, is kidnapped by a jealous girlfriend. What happens to her next is the really unpleasant part, and certainly has you rooting for her vengeful incarnation. However, if like me, you do not necessarily buy the fundamental motivation for such thorough and violent action, the story may read a bit too much like a splatter-fest without the underlying punch. However, you cannot knock it for pacing, the quality of the writing, and the visceral punch.

The writing and the main character of Daniel Kaysen‘s “Off with the Furies” are detached, dissociated, confused and unreliable. This is done on purpose and actually works quite well to drive the story, which is told from the point of view of a heroine who has some real issues with maintaining her sense of reality. The combination of lust, betrayal and jealousy, all mixed into a big pot of personality disorder, results in something quite effective.

The author unrolls the narrative through the eyes and mind of a betrayed spouse, though her tenuous understanding of her situation and the unfolding of her mental confusion leads one to wonder precisely what has and has not been experiencd. The final revelation is perfectly done; unexpected and yet entirely probable. Obsessed with God and evil, with sin and justice, the protagonist exacts revenge on herself in a resolution that is equal parts unpleasant and fitting. The voice of the narration was pitch perfect, and made for a fast and intriguing read.

The final story in this issue, “Red Ribbons” by Stephanie Burgis, is a vampire love story set in post-Revolution France. Two aristocratic female vampires, in love both with each other and with their existence, decide to spice things up by attending a fancy ball. This is already a risky idea, given the status of their social class at this point in history, plus their undead status, but they are drawn on by their desire for stimulation. What happens next is tragedy and vengeance, all sumptuously done. It’s a sort of Anne Rice meets Anaïs Nin with Dumas frowning in the background.

The characters and the setting are developed rapidly and evocatively, and the tale moves with the efficient inevitability of a tragedy to its ending. A very interesting debut story for Burgis, from whom we shall doubtless see more.