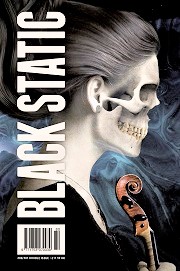 “The Humdinger” by Rhonda Pressley Veit

“Elizabeth Frankenstein is the Saddest Girl on Earth” by Jolie Toomajan

This issue of Black Static is a double issue, numbers 80 and 81, and contains seven original stories, including two novellas and one novelette. Overall, the stories were dark and enjoyable to read.

“The Humdinger” by Rhonda Pressley Veit

Nell, a ‘kitchen witch’, faces a humdinger of a snowstorm in this horror novella. Her husband is away as she hunkers down in the Georgia hills and bakes cookies for Christmas. At first, she believes the weatherman has overrated the winter storm.

And then strange things begin to happen, starting with the mysterious appearance of a snowman in the morning and the overnight demise of all her chickens sheltering in the barn. Nell feels the disturbance, though she is unable to define the source.

Things continue to go badly for her and her friends. And has the snowman moved closer to the house? Something is coming for her, and it’s not at all clear if her brand of magic can fend it off.

This was a nicely crafted character-driven story that read like a mini-literary novel.

This short fantasy/horror story introduces Charlie, a recent widower who flees to the South Carolina coast to escape all the well-wishers after his blind wife’s lingering death. The summer house was his wife’s favorite, but other creatures also called it home over the last five years.

Suffering from a malady where his skin develops patches of fish scales, Charlie does his best to reclaim and settle in the beach house. But over time, he senses things moving in the periphery of his vision. Nothing definite, but disturbing.

This story developed at a slow pace, but the prose was engaging.

Jerry, an anthropology linguist, has just returned from Venezuela in this horror short. In her meetings with the indigenous tribes in South America, she found herself cursed frequently with the words may you be eaten. And two members of her team were stricken when they touched a medicine stick.

Back home, Jerry finds her girlfriend no longer cares much for her and leaves her to look after the house while she goes on a cruise. It isn’t long before Jerry loses control of the renters living in the house, and things only get worse as Jerry feels tendrils of the Venezuelan curse have followed her to Oregon.

This was a convoluted story that offered just a hint of speculative elements.

In this short horror piece, we find Ethan hiking through the Montana wilderness with Wayne, who finds and rescues him. And Ethan needed saving because he isn’t any good at hiking, having stolen both the name he uses and his backpack.

So, Ethan is a lie who wants to avoid the police. But what Ethan, or Jacob, doesn’t know is that Wayne is a lie too. Maybe Ethan should be more suspicious of Wayne’s casual attitude toward the two ripped-up bodies they find decaying on the trail.

This story had an enticing mystery to it, along with a glimpse of a dark and dangerous presence in the Montana wilderness.

A couple is renovating their recently purchased dream home in this horror short. The house is moldy, and they find dead mice everywhere. Their mouse traps fill every night with no end in sight.

At times they despair of ever winning back their dream house. And then they open a mysterious cardboard box in the attic.

This story rambled along and offered very few pieces of speculative fiction.

“Elizabeth Frankenstein is the Saddest Girl on Earth” by Jolie Toomajan

An orphan since her guardian Saba died, Elizabeth drifts between foster homes in this dark horror short. Eventually, Dr. Ernst helps her and takes her on as her research student, even though Elizabeth is still an undergraduate.

In time, Elizabeth begins experimenting beyond Dr. Ernst’s research on reanimating small creatures. Moving beyond the doctor’s research, Elizabeth tries to reconstitute humans and begins with the remains of her beloved Saba.

The author told the story through vignettes that slowly revealed the plot. The reader may need some patience to get through enough pieces before the story can coalesce.

The boy, Hay, is unsure of himself in this horror novella. After his mother dressed him daily in girl’s clothes and his perverted Grandpa sexually abused him, Hay didn’t know what his sexual identity was. His cousins and stepfather ridicule him, and no one trusts or remotely understands him.

Remembering a story his missing father once told him about the thickness of an elephant’s skin, Hay knows this is what he must learn to grow to protect himself from the hatred around him. Then he befriends his cousin, Frannie, who has just come out as gay and is struggling to find a girlfriend. They become kindred spirits in a nasty world.

But when someone kills Frannie, Hay’s family tries to frame him for her murder. What happens next is some dark and hard retribution and a test of Hay’s development of a pachyderm’s skin.

This gripping story delved into the darkest underbelly of humanity and its bigotry. However, the speculative elements were light.