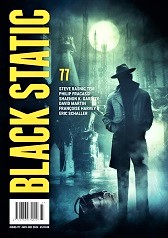 “The Guardian” by Philip Fracassi

“The Dead Outside My Door” by Steve Rasnic Tem

“The Rabbit: A Memory or a Dream” by Françoise Harvey

“The Bride” by Shaenon K. Garrity

Black Static is back with its 77th issue this month, featuring one novelette and four short stories.

“The Guardian” by Philip Fracassi

Ever since Eva and Bryce arrived at the dock their trip to an island the salesman, Manu, touted as an uninhabited tropical paradise, Eva knew something was wrong. When they finally dropped anchor a short distance from shore, Manu tells the six passengers on board that they must swim to the island, but he’d be there when they were ready to go back to the mainland. Still feeling a bit apprehensive, Eva jumps into the water, but it doesn’t take long before her worst fears are realized.

Fracassi’s novelette is a riveting read. It’s reminiscent of Stephen King’s short story “The Raft” and other similar stories, but I wouldn’t call it derivative whatsoever. It certainly has merit of its own, with an unusual ending that’s far more hopeful than the aforementioned stories. It holds the reader’s attention to the end, so much so that I was surprised when it ended, the time went so fast. The ending leaves quite a bit to the imagination in terms of exactly who Manu is and why he brings the group to the island in the first place. Normally, that would irritate me, but in this case, it adds to the horror.

“The Dead Outside My Door” by Steve Rasnic Tem

The unthinkable has happened—the zombie apocalypse. It’s not quite what people expected, though. Isolated and alone on his parents’ farm, Jay spends most of his time documenting what he sees out the windows of his home. The dead aren’t a threat, at least not like in the movies, but since he’s not sure how the disease is transmitted, he’s not taking the risk of going outside. The last thing he wants is to become one of these decaying wanderers. Eventually, though, he might have to brave it.

This isn’t your usual run-of-the-mill zombie story. There are no tense encounters with flesh-hungry ghouls, no threat from roving bands of starving humans. The horror in this tale comes solely from the loneliness of being the sole survivor of a plague no one knows anything about. The ending is quite sad—and poignant if you read the underlying message flowing through Tem’s words. Great story!

“The Rabbit: A Memory or a Dream” by Françoise Harvey

Once long ago, our unnamed narrator reminisces about a childhood event. On that fateful day in her past, the narrator and her sister find an injured rabbit in an open field near a train track. What happens next may have been a dream, or it may have been real. The narrator is not sure. Whatever the case, its impact was a lasting one.

I won’t lie; this story was difficult to get though. Overall, it is a painfully boring example of psychological horror. The writing style is pretentiously stuffy, while the narrative itself is plodding and wholly uninteresting. To make matters worse, it’s as if the point of the tale is a rabbit that keeps skittering away every time the narrator manages to focus their attention long enough to even glance in its direction. And when we do finally catch up with the point, it’s lackluster, dull, and not worth the effort it took to get there. Personally, I’d give this one a miss.

Jessica is a projectionist at the local cinema, and she has a gift. She’s keenly aware of the theater’s ghost, not to mention the many other lost souls wandering the city. Perhaps it’s because she herself is also a lost soul of sorts, her life being little more than a series of disappointments. This night, though, as she walks to work, something is different. Could the mouthless voice that wails in anguish behind her in the alley as she walks to work be a portent of bitter things to come?

I am not all that impressed with Martin’s story. It’s boring and takes way too long to get to the point. The desperation and sadness are there, to be sure, but the narrative absolutely belabors the sense of brokenness it wants so desperately to establish in the most droning way possible. I’d have expected a story written in the first-person present to be a little more engaging, but this is not. I’m also not sure whether I’m supposed to feel sorry for Denny in the end, but I just can’t. His character is not developed enough to give me as a reader any sense of connection to him, yet his vaguely defined emotional pain (only touched on in the briefest way) is expected to drive home the tale’s message and illicit some type of response. Unfortunately, it fails in this—although, granted, that may be because I lost interest halfway through and only continued reading out of obligation.

“The Bride” by Shaenon K. Garrity

You are driving south, hopping from island to island over a Florida road. You don’t quite know where you’re going—you only know that you’re seeking her. The further south you go, the warmer it gets, till it feels as though you’re burning up. The farther you go, though, the more of her story you reveal.

I quite like Garrity’s story and its rather unique take on the classic Frankenstein. That said, it can be a bit confusing. It’s very difficult to determine the point-of-view—is it the reader or someone else? I’m not sure why the second-person perspective is used in places. Using this point-of-view as a framing device doesn’t make me feel like I’m part of the story, nor does it make me feel particularly invested in the narrative. It only serves to highlight that this is a type of meta-fiction. The story itself, though, is quite nice. It’s disturbing, macabre, and does its source of inspiration justice.