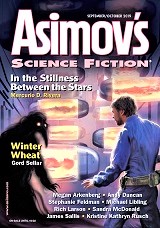 “In the Stillness Between the Stars” by Mercurio D. Rivera
“Charlie Tells Another One” by Andy Duncan
“Messages” by Sandra McDonald
“Escaping Amnthra” by Kristine Kathryn Rusch
“Then, When” by Eric Del Carlo
“The Albatwitch Chorus” by Stephanie Feldman
“All in Green Went my Love Riding” by Megan Arkenberg
“Personal Space” by Lawrence Watt-Evans
“When We Saved the World” by James Sallis
“Can You Watch My Stuff” by Rich Larson
“At the Old Wooden Synagogue on Janower Street” by Michael Libling

“Winter Wheat” by Gord Sellar follows teen Jimmy Oleksyn’s coming-of-age in a farming community in Canada during a GMO-style revolution that promises to bolster bottom lines by starving out pests that consume wheat. When Jimmy’s father warns the other farmers of world-threatening cascading environmental effects and refuses to sign up for the Grower’s Alliance’s new wheat, Jimmy finds himself plunged into a quickly expanding Us versus Them battle of politics, ethics, and economics. No super-intelligent hero himself, Jimmy can barely understand his father’s science lectures, but he sure can read the writing on the wall when terrorists start torching farms and his father’s wheat dies on its own before harvest; the world plunges forward despite them, carrying his family and friends along on a terrifying wave of environmental change and political unrest. As other non-Grower’s Alliance farms fail and Jimmy’s father risks his health pulling all-nighters designing alternative wheat, Jimmy strives to create a stable life in the practical here-and-now with intelligent, empathetic Bonnie. Sellar peers intently into the essence of human progress, comparing our modern struggles to previous generations’ attempts to tame nature—always for the sake of our children as well as for ourselves.

Mercurio D. Rivera brings readers a twist on classic future SF horror with “In the Stillness Between the Stars.” When Emilio wakes early from REMpod hibernation, Emilio’s first thought is of young Tomás, his son who would be long dead if the ship’s AI had not deemed him the best therapist for engineer Angela Velasquez. When Angela’s guilt-induced hallucinations spread to him, Emilio must decide between jumping ship for a second chance with his son or sacrificing himself for his shipmates and the greater good. Ghost-city imagery, inscrutable alien tech, and creepy children’s rhymes make for an entertaining psychological thriller that leaves just enough up to the reader’s imagination.

Andy Duncan leaves readers guessing in his flavorful American folktale, “Charlie Tells Another One.” Charlie begins the story as a young boy facing up to the hard facts of life in a mill town when he stumbles upon a hermit banjo player whose music compels his curiosity. Apprenticing himself through sheer will, Charlie hopes to learn the real power behind his mentor’s portentous lyrical prowess—and perhaps he does, if the reader chooses to believe one of several alternate endings, where Charlie meets the devil. Duncan explores folklore’s blend of fact and outrageous fiction, a blend that has intrigued the collective imaginations of generations with tall tales of anti-hero tricksters.

In Sandra McDonald‘s near-future SF story “Messages,” Maddy and her older brother Tommy must both deal with Aunt Lucy’s death at a young age. When Tommy’s grief exhibits as obsession over a chat program on his late aunt’s computer, then as a recurring heroine addiction, Maddy distances herself to pursue healthier relationships, marrying and starting a family of her own. Only later does she and the rest of the world learn that Aunt Lacy’s computer program allows the living to commune with the dead. Now Tommy’s program, the ‘Eden’ app, revolutionizes the grieving process and destigmatizes death itself, promising a utopian garden in the afterlife, one that tempts even therapist Maddy. McDonald smartly ties grief, obsession, and addiction together in this first-person narrative of eternal loss and emotional self-preservation.

In “Escaping Amnthra” by Kristine Kathryn Rusch. Serpell finds herself reluctantly taking over as captain of a limping star ship on a failed mission far from home. Rusch uses cat fighting among the skeleton crew to hone in on Serpell’s distorted relationship with her wife, a battle of dysfunction that started long before Serpell’s desperate promotion.

Readers should prepare themselves for an emotional ride in “Then, When” by Eric Del Carlo. Whatever naive Lyllian saw in Barrett’s younger self a decade ago, her death leaves him with a gift that’s half curse—a mirror, or pseudo-AI construct based on his physical and mental profile. When Barrett makes the conscious decision to meet his digital almost-clone before selling it to market-researchers, he invites a world of introspection and vulnerability he knows he’d never find in his transient sexual partners. Carlo expertly weaves Barrett’s first-person narrative to breathe new life into themes of self-actuation and introspection, bringing these existential questions down from the hypothetical heights of cloning and AIs to the personal connection of everyday decisions and our ability to redirect our own personal growth.

“The Albatwitch Chorus” by Stephanie Feldman follows the casual narrative of 46 year old Sonia after her move back to her hometown of Pennsylvania to start Sonia’s Mountain Witchery. When an albatwitch corpse appears on her property, Sonia decides to keep the creatures’ close proximity a secret from the authorities in the hopes of avoiding conflict altogether. Not much is known about the albatwitches except that their alien nature sometimes conflicts with human needs. Who is Sonia, then, to give away the secrets of her ex’s teenage daughter, who’s just as fascinated with the albatwitches as she is? Despite the open-ended conclusion, Feldman delivers a gratifying story that engages the reader in Sonia’s attempts to impose meaning and order on her new life.

“All in Green Went my Love Riding” by Megan Arkenberg is a subtle fantasy following a girls’ school through a summer of innocent flirtation marred by deaths in the surrounding village. Arkenberg reveals bits of the girls’ preternatural appearance long after the story has gotten well-underway, and then only in teasing tidbits—a gleaming hoof, for instance. This withholding of information works well with the lovers’ plot but may leave some readers wanting more in-story evidence supporting the subtext of societal commentary. Nevertheless, Arkenberg delivers a complex narrative of childhood innocence challenged by a cruel world of violence and discrimination.

In “Personal Space” by Lawrence Watt-Evans, Gary can’t understand why Annie suddenly gives him the cold shoulder after revealing her unique ability to him—or perhaps he doesn’t want to understand, because that would mean accepting Annie as a person capable of finding him and his clever ideas unattractive. Watt-Evans deftly shifts readers’ sympathy from Gary to Annie as their interpersonal conflict escalates from ideological hypotheticals to physical imposition of wills. Annie’s clearly stated objections settle her as the true protagonist in “Personal Space.”

In “When We Saved the World” by James Sallis, an unreliable first-person narrator relates an entertaining tale of his residency at Charleton Arms, where he befriends a fellow aging science fiction fan whom he believes is secretly a retired writer going by an alias. After spending a majority of their time sitting talking by the unkempt pool, the two residents begin to suspect Twilight Zone level intrigue and investigate school-boy style. Sallis’ nods to SF culture build up a close-to-the-heart questioning of our own perceptions through a character whose fanciful imagination blinds him to a reality harsh with boredom and failure—or does it?

Michael Libling wields the American Dream like a knife in “At the Old Wooden Synagogue on Janower Street.” When Ben/Berko’s dead relatives visit him in his ideal life in small town America, the family declares it a miracle, but the reader soon finds discrepancies in the gap between them now and the family’s brutal separation by the Gestapo.