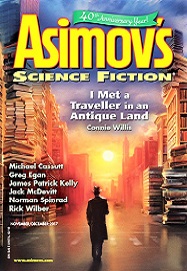 “The Discrete Charm of the Turing Machine” by Greg Egan

“Confessions of a Con Girl” by Nick Wolven
“In Dublin, Fair City” by Rick Wilber
“The Last Dance” by Jack McDevitt
“And No Torment Shall Touch Them” by James Patrick Kelly
“Timewalking” by Michael Cassutt
“Skipped” by Emily Taylor
“Afloat Above a Floor of Stars” by Tom Purdom
“Love and Death and the Star That Shall Not BE Named: Kom’s Story” by James Gunn
“Nine Lattices of Sargasso” by Jason Sanford
“Operators” by Joel Richards
“The Nanny Bubble” by Norman Spinrad
“I Met a Traveller in an Antique Land” by Connie Willis

Dan works for Thriftocracy, a debt recovery company, in “The Discrete Charm of the Turing Machine” by Greg Egan. Even though Dan is a better than average employee, he is let go. Baffled by the lame reason the HR department gives him for his lay off, Dan packs up and goes home. Breaking the news to his wife (Janice—a nurse), he takes up the duties of keeping his house tidy, attending to his daughter and job hunting. Oddly, even when Janice’s job and their home are in jeopardy, they calmly talk about their options. Egan’s attempt to underscore the downside of automated efficiency for education and the work place just doesn’t come across as serious. What message Egan tried to convey gets lost in domestic problem solving.

In “Confessions of a Con Girl” by Nick Wolven, Sophia Lee is a university student pursuing an English degree. Everything was going really well until Roman arrived in her Sophomore year. Granted, Sophia had some blips on her record, but associating with Roman tipped the scales that Sophia never anticipated. In Sophia’s mind, Roman was a person in need of a helping hand; which he completely misread. So now Roman accuses her of leading him on romantically and her so called friends call her a manipulator. It seems unfair how Sophia is being judged, especially when her actions seemed purely altruistic. Sophia does her best to bounce back, yet Wolven’s emotional critical climate hinders her from achieving academic merit leaving Sophia with an uncertain future.

Moe Berg is a well-educated man, baseball player and spy in “In Dublin, Fair City” by Rick Wilber. First game of the season in Cairo, Illinois it is raining, so Moe ponders the current war effort to keep North American’s safe from the Axis powers now eyeing both coasts. It isn’t long before the game is called and a different call to action leads him to his next job. After meeting up with his partner they set their sights for Dublin. Moe is a careful man, trusts his partner and is able to deal with any situation no doubt from experience. Timing is critical to achieving their mission. Don’t expect James Bond action or Sherlock wits; Wilber keeps it simple, but blandly predictable.

In “The Last Dance” by Jack McDevitt, Ethan has entered a contract with Celestial Communications to create an avatar of his wife Olivia. The avatar doesn’t come cheap, but for Ethan after a few days it is almost as if she never passed away nineteen months ago. His daughter Sarah, initially shocked by the new mom avatar, doesn’t quite warm up to the AI. Time passes and although there would always be an absence of physicality, Ethan’s electronically resurrected wife creates a peaceful, stable environment. Yet, Olivia is so perfect that it isn’t long before she starts having her own ideas. McDevitt explores the fringe of AI and human psychology when faced with loss and grief and what happens when we love too much.

Nonno in “And No Torment Shall Touch Them” by James Patrick Kelly, is embroiled in a messy legal battle with Neuromod over being uploaded after he passed away. However, the family is more concerned about what a pain in the ass he has become, which is worse than when he was alive. Some blame his behavior on the upload which was the reason for the lawsuit. Yet, Nonna was still hailed a pioneer regardless.

Carli truly values his grandfather’s accomplishments, but soon learns that relationships spent controlling someone has a shelf–life even after an electronic afterlife. Kelly’s sweeping family drama unfolds alongside the dawn of a new type of eternity; redefining the family dynamic even if it means leaving the relationship in tatters.

James Follet in “Timewalking” by Michael Cassutt, is suffering from sleepwalking. Ordinarily, this doesn’t bother him, except it is affecting his work at May Cay. After some routine doctor visits, his doctor suggests taking a drug. James rejects the idea. Instead, he web surfs and comes across Ikelos. At Ikelos he meets non-doctor Kolora whose sessions don’t satisfy James. Her alternative explanation that he is timewalking halts therapy. Yet as James goes about his day, he starts noticing small details he remembers dreaming about. Baffled, James reconnects with Kolora, possibly his last shot at answers. Cassutt’s fascinating mystery of James’s strange sleep habits has remarkable implications, yet James’s disbelief deflates the tension and magic that could have driven the story to an interesting close.

In “Skipped” by Emily Taylor we follow a young woman taking a routine transport around a space station and finds herself the unfortunate victim of a displacement in space. Apparently these glitches, though rare, are a result of a quantum mathematical error. Of course the company has clear guidelines on how to handle such events, but it is still a shock. Comparing notes with her “other universe partner” helps calm her, but learning about her other self’s life fills her with yearning. It isn’t long before she starts to consider possibly leaving her own universe no matter how selfish it sounds. Taylor shapes and depicts the complicated blessing a multi-universe world can become and the emotional backlash it generates in it wake.

Revali and Keman in “Afloat Above a Floor of Stars” by Tom Purdom have entered a contract to travel in complete isolation for thirty-six years to the edge of the universe. Dama Desha, the head of the project, stipulates they must alter their humanity at different times and perform a ceremony. It is quite the psychological project. However, if they both successfully accomplish their tasks, they receive funding for their projects. Easy, right? At first it goes well and then Keman starts challenging the status quo. Revali’s funding in jeopardy, he must use all his resources to convince Keman to honor the contract. Purdom offers a world where gender and identity have diverged, yet they still find common ground to appreciate the universe and themselves.

Kom has traveled a great distance in space only to find an escape capsule in “Love and Death and the Star That Shall Not Be Named: Kom’s Story” by James Gunn. Once Kom figures out how to open the capsule, he begins the process of reviving the strange creature within. Sam, alive but weak, starts listening to Kom’s account of how he arrived at the Star That Shall Not Be Named. While Kom and Sam’s lives could not be more different they find kinship in sharing their burdens. Kom’s story obviously monopolizes most of the story, but Sam’s small part is no less poignant and sad. James Gunn does a marvelous job introducing us to Kom’s people and his unique plight to follow in his father’s footsteps.

Amali, Jecha and Baba live in a world where communication technology has globally “crashed,” causing mass casualties around the world/space in “Nine Lattices of Sargasso” by Jason Sanford. Amali’s family managed to find safety after a failed voyage and found refuge on an island with Lady Faye. Yet, something isn’t right about the island. Grateful for Lady Faye’s help, Amali is at odds with her suspicions until a stranger lands on the island and the ghost of her mother suddenly appears in the rescue pod. Soon old wounds open, the truth about the crash is discovered and Lady Faye’s role becomes a bargaining chip to free Amali’s family. Sanford’s post-apocalyptic world is rich, surreal, and full of mystery, keeping everyone on the edge of their seats.

Barry Connors has been tasked by the Association with finding out who has been hijacking truck shipments in the west (California, Nevada, and Arizona) in “Operators” by Joel Richards. Barry, having been highly recommended, doesn’t waste any time checking out trucker stations and getting friendly with the local boys. It isn’t long before he has gained one particular trucker’s trust after doing some odd jobs and proving himself dependable. Once Barry becomes part of the inner circle, he soon learns who the Operators are and what they ultimately want. Richards builds the suspense and alludes to a foreign conspiracy when the real deal is far more innocent and blue collar.

Ted (Teddy) has spent his eleven years under the careful supervision of his parents and the Nanny Bubble in “The Nanny Bubble” by Norman Spinrad. His parents keep him busy with pre–approved games, play dates, and the most up-to-date technology. Ted really just wants to play baseball—real baseball. After his father takes a wrong turn, Ted discovers a baseball field with kids (older and younger) playing. He escapes his house quite easily and proceeds to play with the local children, until his frantic mother calls him and he must decide to stay or return to his prescheduled life. Spinrad displays the helicopter parenting style to a sickening degree, but shows there is a way to take command of our choices no matter how old.

After a hellish interview and being stood up by an editor at Random House, Jim is urged to take in New York city and relax in “I Met a Traveller in an Antique Land” by Connie Willis. Jim considers his sightseeing options when the rain forces him into a bookstore. While exploring the shop, a young woman enters, conversing with the owner before disappearing into the back. Intrigued, Jim follows a meandering trail through a mad labyrinth of hallways and staircases all heaped with books. When he catches up with the young woman, he has more questions than he believes can be answered or revisited. Willis has crafted a mystery full of wonder, magic, and detective work that makes the outcome frustrating and believable.