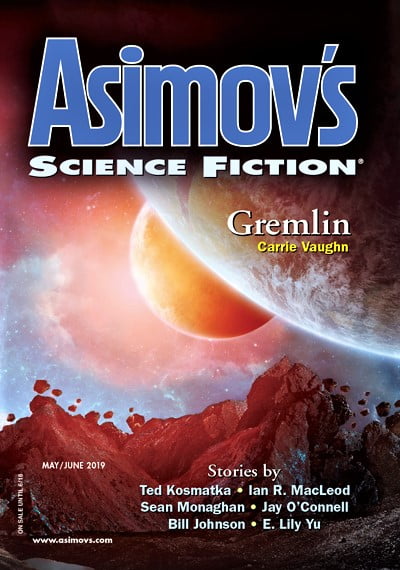 “The Doing and Undoing of Jacob E. Mwangi” by E. Lily Yu
“The Memory Artist” by Ian R. MacLeod
“Sacrificial Iron” by Ted Kosmatka
“Never the Twain Shall Meet” by Peter Wood
“Chasing Oumuamua” by Sean Monaghan
Recrossing Brooklyn Ferry” by John Richard Trtek
“Not Only Who You Know” by Jay O’Connell
“The Intertidal Zone” by Rahul Kanakia
“Gremlin” by Carrie Vaughn

Bill Johnson kicks off this issue with “Unfinished Business.” Set in Canada, the story deals with two park rangers who become involved in an interspecies conflict when representatives from a spaceship containing sentient beings from throughout the history of Earth find fossilized tracks that will permanently change the politics of the ship. Johnson does a solid job of world building and the ship, part of a larger series, is an interesting world. Technically the author is quite skilled as he leaks dribs and drabs of information at a pace designed to keep the reader interested, but partially ignorant almost until the end. My only complaint is that as everything unwinds, the story boils down to a simple spy-vs-spy type narrative that I felt disappointed in the final delivery. That said, the story is solid and well written.

“The Doing and Undoing of Jacob E. Mwangi” by E. Lily Yu is a text that tries too hard. Jacob is not a Doer, he is instead one of the indolent gamers who isn’t productive. This is almost a sin in a world where world peace, following a credulity straining plague and human psychic awakening, has enabled people to sort into Doer and non-Doers. At its core the story tells how Jacob gradually learns the joys of learning. Unfortunately, the story is trite, the world building precarious, and the content pedestrian. I found the work disappointing.

“The Memory Artist” by Ian R. MacLeod is a very interesting piece that, for me, resonates with some of the old Robert Silverberg short stories. It starts when a memory artist, in a future far from here and in a vastly different world, meets up with a holographic projection and takes a tour through her own memories. I don’t want to provide details and spoil the twists, but the author does a good job of creating a parallel commentary of memory and self-fashioning, while also providing the reader with a panorama of his universe. The final twist was a little predictable for my taste, but the elements all clicked together nicely. Overall a fine story, especially for those who are interested in a more reflective piece.

I think my favorite story in the issue is “Sacrificial Iron” by Ted Kosmatka. The frame of the story isn’t new at all. It is the trapped in a generation ship story that has been done many, many time before. However, Kosmatka uses the setting to explore both the psychology of isolation and history (In a meta-aware “the winner writes history” sort of way). The build to the final conflict seems both rational and inevitable. The writing is clear and strong and the characters very believable. I also appreciate the symbolic nature of the title and how the symbolism develops over the course of the story.

“Never the Twain Shall Meet” by Peter Wood is a fairly typical story of sibling rivalry with the SF twist being that the main character was inadvertently twinned in a quantum teleportation mishap. Rick, the original, and Marshall, the clone butt heads over personal issues, their love lives, and the family barbeque joint. There is also an indolent, self-aware robot for comic relief. The story is decent, but paint by the numbers and so there is very little to discover. The character arc feels truncated and the robot is a flop as a character. The story isn’t at all bad, but it is skippable.

Sean Monaghan uses the McGuffin of a trans-solar object as an entry to a story that is actually about familial relationships and mental health in “Chasing Oumuamua.” Meredith, a young art dealer, is flown back home to Florida by NASA in hope that she can get her brilliant, but mentally ill, brother to help them complete a revolutionary space drive in time to touch down on a trans-solar object that will soon pass by Earth. The author does a good job of evoking sibling relationships and teasing out familial conflict in her story. That said, I was unconvinced by the portrayal of mental illness, it felt like something out of a TV episode. In the end, it turns out that a little sibling love solves problems and NASA gets its happy ending. While readable, the story is somewhat pedestrian and won’t leave much of an impact.

“Recrossing Brooklyn Ferry” by John Richard Trtek is a time travel story with the poetry of Walt Whitman as the narrative hook. Bax, a historian with ties to a time travel research project is told that his girlfriend has died in a random accident while in 1920s New York. It becomes immediately evident that more is going on and the rest of the story is built around world building and teasing out the actual events. This is the author’s first fiction sale, and for a first effort it is very solid. The narrative technique, foreshadowing, etc. all is well done. Where the story falls flat is in the reveal and the general shape of the narrative. The idea that a group of people would flee to the past to try and change history is, at this point, trite. On top of that, the hints early on are too obvious and so the final reveal was completely unsurprising. I would gladly read further work by the author since his writing skills are obvious, but this particular piece is no more than briefly entertaining.

Jay O’Connell creates an interesting piece with “Not Only Who You Know.” Set in the near future where AI has left the majority of people unemployed, Rosalind has managed to find a job, but when her discovery is swept up by the mega-corp that employs her, she decides that she is unwilling to settle for crumbs. There is a lot to like with this story. The world building is quite solid, the narrative voice is interesting and the Spy-vs-spy mentality that echoes through the work functions quite well. I do have mixed feelings about the conclusion. I both like it and dislike it since I have yet to decide to what extent I feel that it is consistent with the rest of the story. I would certainly say that readers should give it a look and see what they think.

“Gremlin” by Carrie Vaughn closes the issue. Told in three different time frames, WWII, the Iraq war and the far future, it is the story of a little, metal-eating ET who finally finds his way home. In it we see how three different women pilots from the same genealogical line interact with the “Gremlin.” The initial portion is by far the strongest of the three as we get to know Natalia, a female Soviet pilot who finds the alien she names “Drook.” The characterization is good and the motivations are believable. The following two sections, while decent, suffer in contrast and the ending is both predictable and a letdown. The story is solid and worth the read, but will be forgotten by the time you turn the page.