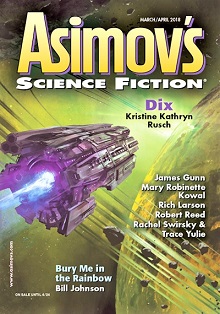 “Artisanal Trucking, LLC” by Mary Robinette Kowal
“Queen of the River: The Harbor Hope” by James Van Pelt
“Emojis” by Rudy Rucker
“A Threnody For Hazan” by Ray Nayler
“Love Songs For the Very Awful” by Robert Reed
“Seven Months Out And Two To Go” by Rachel Swirsky and Trace Yulie
“The Billows of Sarto” by Sean Monaghan
“The Waiting Room: The Pedia’s Story” by James Gunn
“Attack on Terminal: The Pilgrims’ Story” by James Gunn
“Because Reasons” by Alexandria Renwick
“In Event of Moon Disaster” by Rich Larson
“Bury Me In The Rainbow” by Bill Johnson

This issue has a bit of something for everyone, from pure eyeball-punching adventure (courtesy of James Van Pelt), to feel-good endings or nostalgic tributes, (Kowal, Gunn, and Johnson), and memorable dramatic irony (Larson) that’s sure to stick with readers for good while.

“Dix” by Kristine Kathryn Rusch follows Yash Zarlengo, an engineer aboard the ship Ivoire, which has jumped five thousand years into the future by accident. Yash has trouble adjusting to the loss of her life, as does most of the crew, so they take solace in one another and in the ship’s well-stocked bar. When First officer Dix does something that turns the ship upside-down, Yash has to get to the bottom of it. There’s lots of intrigue and engrossing dialogue in this one. The narrative is propelled by the well-rounded and interesting characters as they shoulder the burdens of their situation. Then ending is satisfying and tantalizing.

“Artisanal Trucking, LLC” by Mary Robinette Kowal follows Dude, a man in a world full of automated cars. He’s thrilled to drive all by himself because he relishes the power, the agency, and decides that he’s got the right idea. That is, until he hits a dog. It’s a bloody mess that makes him late to his delivery. The story focuses on his musings about technology and its purpose, and what an authentic human experience ought to be. This story was compelling from start to finish and full of pithy insights.

“Queen of the River: The Harbor Hope” by James Van Pelt takes us to a flooded New Mississippi bog and the perils of the Harbor Hope as the pilot (no, not the captain) tries to navigate through debris and watch for those pesky neo-pterodactyls above. The world is fascinating, full of strange sights and odd creatures. The plot is something out of an expertly written episode of Star Trek, following the crew of an interstellar spaceship stranded on a planet that they’re trying to make their own. This one is a page-turner with an excellent narrative voice.

“Emojis” by Rudy Rucker is about Scott, a guy who has trouble with empathy. So, he infects himself with a virus that overlays emojis in his vision next to the people he encounters. The “empathy bugs” they’re called, and their creator wants them to be contagious. Scott didn’t sign up for that, so he’s conflicted. He sticks with it since the emojis help him get along with his wife. This is a charming and mostly amusing tale about the perils of virtual reality and the weakness of the human will.

“A Threnody For Hazan” by Ray Nayler is told from the POV of an unknown narrator observing a super-sleuth inventor named Hazan. The narrative is concerned with greatness and the study of it: in this case, a map of synaptic connections called “the connectome” that analyze the forest of the brain. The study of this allows one to cheat, to become great without really working. The ideas in this story are big and interesting, but the style of the prose is detached. Because of this, it didn’t resonate emotionally.

“Love Songs For the Very Awful” by Robert Reed is about small town politics, the kind of place where everyone knows everyone but nobody is really intimate. The prose is absolutely engrossing, as it directly addresses the reader: it’s talking to you about things you do. And it’s asking you to consider what makes a person predictable, and if experts could be trained to see it. After all that speculation, readers are finally introduced to Bodden, the protagonist. Who is he? By the end of the story, you’re still wondering, and it’s downright unsettling.

“Seven Months Out And Two To Go” by Rachel Swirsky & Trace Yulie is about Kate, a pregnant woman tending a farm and watching over her pregnant cows. She lives alone, even though she didn’t used to, and the animals seem to notice something going on. In fact, one cow is obviously an alien, and Kate is determined to ignore it. The story starts out at a slow pace, but the prose is charming and utterly engrossing. As it goes on, it gets absolutely trippy: the images and dialogue and the timeline all run together. It’s ultimately about loss and family and the power of generations, with some aliens thrown in.

“The Billows of Sarto” by Sean Monaghan takes us to the Sarto Excursion Center where Jack Kaufman is climbing the cliffs of a caldera. Strange creatures and sights await every tourist. He’s told not to swim in the pools, so he decides to go in naked, naturally. There he meets a strange woman in the pool who won’t stop talking to him. There’s something uncomfortable about their conversation, but the narrative veers off to a happy ending that I’m not sure the protagonist deserves.

“The Waiting Room: The Pedia’s Story” and “Attack on Terminal: The Pilgrims’ Story” are both by James Gunn and are related to the Transcendental trilogy. The first story picks up with the space mercenary Riley and the computer inside his head called the “pedia.” The second story follows him to the barbarian Minals where a war has broken out. The universe is vast and riddled with fascinating politics (Earth’s Solar System is already owned by aliens, you know, and humans are squatters!). Gunn’s writing is always a treat and these stories will satisfy fans of his works.

“In Event of Moon Disaster” by Rich Larson opens with Laurie and Sol on the moon, and their banter is absolutely charming and uproariously funny. Laurie goes down a crevasse and reports that it’s strange, but nothing to worry about. She comes back and goes to bed. Problem is, once she’s in bed, another version of her knocks on the airlock door, and Sol’s got to decide what to do! Cancel all of your appointments because this tale is an absolute page-turner with a perfect ending.

“Because Reasons” by Alexandria Renwick is written in an interesting format: facts are presented, and then explanations are given in the form of an answer. This is sort of like reading quodlibetal questions written by medieval philosophers. (It has been asked:, and it has been answered thus: type stuff.) This is an extremely interesting creative decision to make and it’s a good hook, but the narrative momentum stops and starts in many places due to this prose style, which means it will frustrate some.

“Bury Me In The Rainbow” by Bill Johnson is a sequel to his Hugo award winning story “We Will Drink A Fish Together” published in 1997. The story opens in Dakota, and a group of misfits are looking at the body of a Synth assassin on the ground. It’s an intriguing story full of places and characters that are a bit overwhelming before, as a reader, I got used to the setting and situation. I cannot comment on how well this pairs with the original work that inspired it. I was very impressed, however, with how Johnson compressed a novel-rich world into a shorter format without jarring me. This one reads like a nice bit of comfort-food; set aside for those rainy days, or if you’re a fan of the original story, perhaps a nice nostalgic jaunt.