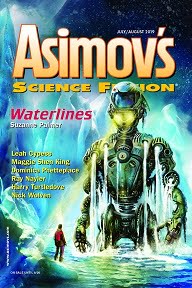 “The Work of Wolves” by Tegan Moore

There are ten first publication stories in the July/August issue of Asimov’s Science Fiction, with four shorts, four novelettes, and two novellas. The quality of the stories is high, with just one exception.

“The Work of Wolves” by Tegan Moore

This unusual SF novella tells the story of Sera, a genetically engineered Enhanced Intelligence dog trained for search and rescue. Her handler, Carol, dislikes this new kind of dog and doesn’t trust her. Meanwhile, a need to do her job drives Sera, including being able to work well with her reluctant handler.

Carol is ready to quit when the authorities assign Sera to a military task, but reluctantly agrees to go on this one last mission. Sera hasn’t done such a job before but is eager to succeed and find a way to get Carol to accept her. Together they must stop a saboteur from shutting down the main fusion electricity plant in the US.

Deep underground, confused by the humming machinery, Sera must work closely with Carol to find a drone rat sent to damage the reactors. But when Sera finds the rat, she finds it has many similarities to her, creating a conflict in her drive to eliminate the saboteur.

This character-based story’s different POV added another level of interest beyond the plot itself. It had plenty of mystery and the final twist in the dog’s tail was hard to predict.

“The Universe Within the Universe” by Dominica Phetteplace

She was using the newly developed time simulation to visit her teenage self in this SF short. The plan was to visit herself at seventeen, but instead she found herself talking to her suicidal thirteen-year-old self.

She flits about in time moving forward weeks at a time, each time she has just moments with her other self. Her original goal was to talk to the seventeen-year-old version of herself that had a vision that set her on the road to creating the simulation. What affect would these earlier visits have on this simulated version of herself?

This story was well crafted and engaging. It was an alternative view of time travel and the paradoxes it would cause.

“The Terminal Zone” by Nick Wolven

A grandfather is visiting his only daughter and four grandkids on Ceres in this SF novelette. On Earth the grandfather, Cornelius, immersed himself in the news and social networks, relying on them to guide him always. But here, in the colony’s habitat, he finds the people boringly dependent on more direct communications, and he feels lost.

Calla, his daughter, is busy fixing a gadget, and his grandkids are busy in their own zones. Fed up, he loses his way in the hab, unaware he must read signs to find his way. Things look dim for the out-of-place grandfather until a crisis crystalizes the generational differences.

This story raised some interesting ideas, giving an inverse generation gap. Overall the prose was too slow to be engaging.

In this near future SF short, an autonomous vehicle is taking a family of five along the coastal highway. The family has taken the effort to name their car, Ardy, and the vehicle is proud of the distinction.

Along the way, Ardy helps manage the three small children by entertaining them and when other cars warn it of a manually driven car a mile ahead, it takes note and makes some minor adjustments. Soon, though, that manually driven car gets closer and things turn bad on the rain-slicked road, forcing Ardy to make life-and-death choices. Will the cute kids, and their love, influence its decisions?

Though many other authors have explored this subject matter, the author told this story from a different perspective creating a well-paced yarn.

“The Story with Two Names” by Ian McHugh

A biologist, Mils, arrives on the planet Bande in this science fiction novelette. The company that hired her is harvesting the planet and finds it devoid of sapient life. She is there to study the animals and plants that grow there, and she’s fascinated by how alien it is to life on Earth. She hears of some sub-sapient species that exist but is assured the creatures will not pose a violation of federal rules.

Seen-by-the-Sky is a venerated member of his tribe and is confused by the sudden appearance of foreigners that are disrupting the migrations of his people’s food sources. The tribal elders believe the foreigners aren’t sapient, acting like wild creatures. But Seen-by-the-Sky isn’t so sure.

The meeting of two alien cultures is told from both perspectives. Each believes it is right, and the other is too primitive to work with—while some try to find a common ground.

This story started slowly as it had to set the scene, but it picked up in the last third making it worth the time.

“The Ocean Between the Leaves” by Ray Nayler

Istanbul is a protectorate in this futuristic SF novelette, where citizens hold privilege over the non-citizen have-nots. Feride, a poor worker, has caught a staphylococcus bacterial infection that is eating her body away. But a chance at salvation comes when the state decides to experiment with a new procedure and transfer her mind to another body, giving her three days to say her farewells.

As the three days wind down, someone else offers her a chance to extend, but the price is high. Does she really have any say in what they do? Can she find any justice between the leaves they toss her way?

This was an intriguing story that was hard to predict as it slid through a maze-like plot. A good read.

“Fragments from the Library of Cygnus X-1” by Chris Willrich

Willrich has an SF short about stories stored at the end of time. It is an excerpt of a catalog of civilizations as diverse as the Cambrian fauna was on Earth during the explosion. It is hard to describe a plot that hardly exists.

This was difficult to read, it had no dialog, no action, no plot and no engaging prose. It was hard to tell if it was a sermon or a list of possible civilizations.

“The Disappeared” by Leah Cypess

This is an SF novelette about Daniel, whose mother disappeared for a year. Before, his mother had been suffering from a life-debilitating progressive illness, and when she returned, something had cured her. Thousands of others had disappeared and returned a year later all cured of whatever ailed them.

It’s unknown where they go and the Disappeared have only foggy notions of what happened. One thing the experts do agree on is that the people’s brain scans are different. Daniel goes further, thinking they replaced his mother. But he isn’t certain, and his mother resists any attempt to do a deeper scan.

This story’s prose reads well and keeps the mystery going. However, the ending was a little anemic.

“Speaker to Emos” by Harry Turtledove

This mildly speculative short story describes a therapy session between two emos, each afflicted with vMS giving them higher emotional instability than ‘normies’. Carol’s patient, Justin, was late, another sign of vMS, and when he arrives, she takes what’s left of his session to show him why he has to learn to adapt, and not wait for the world to adapt to him; because it won’t!

This story had a very tenuous hold on the speculative genre. But it was an interesting read about how hard it can be for people with a disorder like Asperger’s to adapt to a world that doesn’t care about them.

Ray Landhum is the surface administrator in this intriguing SF novella set on the frozen planet Erax. Humans mine under the ice caps, but the seas are strictly off-limits, by treaty with the Oceanics, an advanced alien race that eschews all contact with any humans.

Ray is a good administrator, but lousy at relationships and keeping warm. But he finds his problem-solving skills challenged when a Walker, a robotic extension of the Oceanics, comes to bring some human body parts found in the ocean.

From there events drag a reluctant Ray through a maze of deception and smuggling that have sinister purposes behind them.

Palmer’s story had a pleasing pace to it, plus plots and subplots aplenty; more than enough to keep the reader turning the pages. This was a great rip-roaring read.