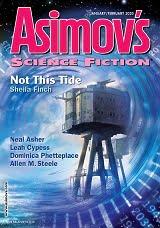 “An Alien on Crete” by Neal Asher

“Third Shift” by Mar Catherine Stratford
“The Palace of Dancing Dogs” by Allen M. Steele
“The Antidote” by Dominica Phetteplace
“GO. NOW. FIX.” by Timons Esaias
“A Pack of Tricks” by Leah Cypess
“The Way to Compostela” by Jean-Louis Trudel
“The Refraction of White Lies” by Meredith Lozaga
“The Kaleidoscope City” by Doug C. Souza
“You’ll Live” by B.S. Donovan
“Not this Tide” by Sheila Finch

This long-running publication celebrates the one hundredth birthday of its namesake with stories transporting the reader to the past, futures near and distant, and the far reaches of space.

“An Alien on Crete” by Neal Asher reveals its premise in its title. The protagonist discovers an extraterrestrial, wounded after an encounter with soldiers, trapped in an abandoned cistern on the Greek island. He helps it out of the pit and tends to its needs. While helping it return to its spaceship, and avoiding the military hunting it, he learns much about humanity and his own destiny.

The alien is an interesting creation, and the setting is vivid and unusual. The way in which the main character’s encounter with the extraterrestrial leads to profound changes in his mind strains credibility. It also requires a great deal of expository dialogue between human and alien to explain why this happens.

“Third Shift” by Mar Catherine Stratford takes place at a fast food restaurant in the Arizona desert. The area attracts UFO cultists because of mysterious lights seen in the sky. Of the three main characters, two were abducted by aliens in the past, leading to a final encounter with the extraterrestrials that determines their futures.

Narrated in a realistic, informal style, this story is most notable for its finely drawn characters. They seem very real, even when the science fiction elements do not. One of the abducted characters is a young person of nonbinary gender, and the plot can be read as an allegory for an escape from an unsympathetic family.

“The Palace of Dancing Dogs” by Allen M. Steele is the latest in a series of novellas set on a planet, inhabited by canine-like aliens, where human starships made emergency landings many centuries ago. In previous stories, the narrator discovered the wreck of one of the spaceships and records of the voyage. Previously believing that all humans lived in a single area, at a low level of technology, he later found a secret location where they had more advanced machines.

In this adventure, he travels to a place where humans have an important impact on alien culture, but work as serfs. He and his companions struggle to convince the ruler of the aliens that humans should be free.

The author does a fine job of world-building, creating a planet with a rich history, complex culture, and detailed geography. Readers unfamiliar with previous novellas may find the plot difficult to follow. Those who have read them may grow impatient with the need to recap prior events. It seems likely that these stories would be more effective if edited into a single novel.

In “The Antidote” by Dominica Phetteplace, the narrator works for a company that supplies therapeutic designer drugs to their clients, although her true passion is dancing. A wealthy man hires her to dance at a private party, but he really wants her to help him use the company’s technology to create his own illegal substances. She tries one of his drugs, leading to a change in her life.

The story’s future world of genetic engineering and psychoactive substances used as spa treatments for the rich is an interesting one. The plot is less complex, and can be seen as a fable for taking risks to achieve one’s goals.

The main character in “GO. NOW. FIX.” by Timons Esaias is a pillow with artificial intelligence. A customer purchases it for use on an airplane flight. When disaster strikes, the pillow, along with many other AI-equipped devices, struggles to save the lives of as many passengers as possible.

Although it deals with a tragic situation, the story has a touch of whimsy. The AI’s, with their different personalities and dedication to human beings, remind me of the sentient appliances in the well-known fantasy story “The Brave Little Toaster” by Thomas M. Disch. The reader will admire the heroic pillow, but may find its adventure difficult to believe.

“A Pack of Tricks” by Leah Cypess takes place in Renaissance Italy. The narrator is a young woman who works as a model for painters. Like many others in this place and time, she is aware that there are certain people who act in strange ways and who can predict the future. She thinks of these so-called Visitors as witches, but the reader soon realizes that they are time-travelers. Approached by a Visitor because she will pose for a painting that will become famous, she uses the time-traveler to take an unusual form of revenge on a man who harmed her.

The author creates a convincing portrait of the past. The narrator is a compelling character, who wins the reader’s sympathy, but who also has beliefs and attitudes of her time that modern society would find disturbing. The story’s theme, that the mores of one time are not those of another, is strengthened by the fact that there is another Visitor, from even farther in the future, watching the first Visitor with the same air of superiority that he shows to the people of the past. Although this character plays no part in the main plot, she serves as a subtle reminder that our descendants may think of us in the same way that we think of our ancestors.

“The Way to Compostela” by Jean-Louis Trudel is set on the Moon. A man who works as a physicist, coming up with possible models of the universe to be analyzed by supercomputers for their applicability, creates a scenario that could lead to improved interstellar flight. Although this sounds like a boon to humanity, certain business interests are opposed to it, and the man’s life is in danger. Unable to travel immediately to safety on Earth because his body is too weak from his many years on the Moon, he boards a train that travels in a loop, slowly increasing its acceleration so the passengers slowly become accustomed to higher gravity. While on this endless journey, he meets an intriguing woman, and faces the possibility of being killed by an unknown assassin.

The story’s setting and speculative content are unusual and intriguing. The plot works better as a love story than as a suspense thriller. In clichéd fashion, the would-be murderer takes time to explain everything to the intended victim, which seems very unlikely.

The narrator of “The Refraction of White Lies” by Meredith Lozaga is a man married to an artificial intelligence, within a simulated human body, who thinks she is a real woman. When the man shows symptoms of a peculiar illness, he visits a physician and discovers a shocking truth.

This twist in the plot manages to be both predictable and implausible. Although the story has strong emotional appeal, powerfully conveying the narrator’s genuine love for his wife and their adopted daughter, it never becomes convincing.

“The Kaleidoscope City” by Doug C. Souza takes place inside Ganymede. Long ago, human settlers carved a dwelling place deep within that moon of Jupiter. The narrator fulfills her dying father’s final wish by taking him on a trip to the community they built. We soon find out that, in fact, her father is already dead, and that his spacesuit contains only the countless nanobots that were inside his body, which now act as a simulation of the deceased man. The daughter’s own nanobots warn her than she is close to death herself, leading to a bittersweet ending.

The story is full of richly imagined technology, and the exotic setting is dazzling. The author’s attempt to touch the reader’s heart is mostly successful, although it is somewhat weakened by the revelation that the narrators’ father is not truly present during her final journey with him.

“You’ll Live” by B.S. Donovan features two children, their mother, and the woman’s abusive boyfriend. After living in an old car for a couple of years, they are finally able to move into a modest trailer home. When the boyfriend beats the woman badly, she makes a sacrifice for the sake of her children.

The setting is a near future of self-driving cars and virtual reality, but these elements are irrelevant to the plot. The story is a powerful and depressing one, and might have been even more so as mainstream fiction.

“Not this Tide” by Sheila Finch alternates narrative sections between the Nobel Prize ceremony of the year 2035 and England during the Second World War. The elderly woman in Oslo in the near future is a young girl during the war. While she stays in London with her mother and sister, her father battles incoming Nazi aircraft aboard a fortress built in the ocean near the Thames estuary. Both father and daughter encounter a strange visitor, unseen by anyone else, who influences their behavior at times of crisis. It comes as no surprise to learn that the peculiar young man is from the future, and that he is trying to help them survive the war so they can go on to become important peacemakers.

Based on the author’s own experiences during World War Two, the sections of the story dealing with London during the Blitz are absolutely convincing, particularly as seen through a child’s eyes. The sections set aboard the sea-based fortress, the remains of which can still be seen off the coast of England, are equally vivid and realistic. The characters are completely believable in their hopes, fears, doubts, and quirks of personality. Although the theme is one of triumph over adversity, the author does not shy away from the horror and tragedy of war.

Victoria Silverwolf thinks it’s only a coincidence that her two favorite stories in this issue both deal with time travel.