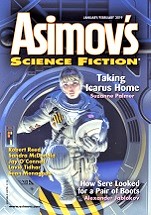 “How Sere Looked for a Pair of Boots” by Alexander Jablokov

“The Esteemed” by Robert Reed
“Ventiforms” by Sean Monaghan
“Taking Icarus Home” by Suzanne Palmer
“Credit to my Nation” by Sandra McDonald
“Written in Mud” by William F. Wu
“All the Difference” by Leah Cypess
“The Gorgon” by Jay O’Connell
“Salting the Mine” by Peter Wood
“Neom” by Lavie Tidhar

Alexander Jablokov‘s “How Sere Looked for a Pair of Boots” starts like chapter two in a book. World-building Terminology is tossed around you’re expected to know or intuit and, many times, that’s difficult since phrases and faces pop up quickly and repeatedly as the story progresses. Even the ending is tied to a major character from another tale and their inclusion here feels weird and wrong when taking the story as a standalone piece.

I did a little research and it looks like Asimov’s has published several of Jablokov’s stories, including another story about the main character, Sere. I have to imagine I’d appreciate the piece more if I’d read that story before jumping into this one.

All that aside, it’s a decent detective story with a fully developed setting and strong writing. It’s worth a read, but I think you’ll probably enjoy it more if you read “How Sere Picked Up Her Laundry” in Asimov’s July/August 2017 issue.

“The Esteemed” by Robert Reed is a long, sometimes confusing story that follows a time traveler named Mahlon and his time-manipulating travels across the 20th century. This story has dozens of twists and turns, with a narrative style that periodically throws alternate futures into random asides in the middle of dialog passages in a way I found disengaging and, sometimes, confounding.

Despite that, “The Esteemed” is an interesting take on time travel and the psychology of the travelers who take part. It’s worth a read but be ready to be misled by the narration.

Sean Monaghan‘s “Ventiforms” is, at its core, a sweet tale of a mother trying to find her son. Monaghan does a great job setting the stage for the Tailé’s quest. The descriptions of the planet Zephierre and its “ventiforms” is both entrancing and beautiful. It’s easy to understand, by the end, why her son, Brandon, is doing what he’s doing. I’m not sure many of us would choose otherwise.

“Taking Icarus Home” by Suzanne Palmer takes a little while to get used to—it’s not often you find stories in second-person out in the wild—but once you do it flows well from beginning to end. Palmer takes this idea of Icarus flying close to the sun, sets it in the far future, and brings it home into a satisfying conclusion. While there isn’t much in the form of real tension, the world-building and pacing is tight and well executed. Definitely worth a read.

“Credit to my Nation” by Sandra McDonald is an interesting story about our narrator, Unity, trying to find meaning in an otherwise dark life. The narrative tool for this journey comes in the form of a sort of personal time-travel, where a person is able to dig through their past and future using their DNA. The mechanic is reminiscent of the Assassin’s Creed Animus, though there’s no interaction between the person and the memory; it’s simply a display. It’s an unoriginal idea tweaked expertly into a narrative device that feels extremely personal and vulnerable.

“Written in Mud” by William F. Wu is a hilarious trip into a dystopian future. It’s filled with rapid-fire Gilmore Girls-style dialog that’s biting and witty and drives the plot forward with quip after quip. Oh, and there’s a talking fish. It’s a fun story and well worth a read.

“All the Difference” by Leah Cypess is a fantastically introspective story that follows our unnamed narrator as she uses a time travel system to explore alternate timelines to see if she’s made the right decisions in her otherwise mundane life. If you’re looking for a high-prose literary piece, this isn’t it. If you want a perfectly accessible, well-written story, this is for you.

The majority of the story is inner monologue and it’s rich with indecision and nearly neurotic chains of thought that resonated deeply with my own reflections. The ending is great, if more terrifying than expected.

Jay O’Connell‘s “The Gorgon” is an interesting story. Essentially, it follows a near-sociopath (he goes out of his way to show he’s not one, obviously) as they stumble across a massive plot by an artificial intelligence that hasn’t been built yet, but is interfering with the present through some sort of time travel mind-reading… thing. The concept is interesting and the narrator, while wholly unlikable, drags you along while you wonder “what the hell is this control freak going to do next?” The ending happens kind of all at once and, personally, was a little unfulfilling. I felt like it should have exhibited more action and consequence there, so, for me, it fell just a little short.

“Salting the Mine” by Peter Wood sets the stage for a final showdown between an old, abandoned mining colony and their returning corporate overlords. The plot is simple: ruthless taskmaster returns to a colony that’s developed its own culture and bonded with local aliens; the locals stymie that effort through trickery and deceit. There’s nothing wrong with “Salting the Mine,” but it doesn’t feel like there’s enough conflict and failure in the story to be truly engaging. Even the small romantic side-plot just kind of “works out.” Wood’s writing is great, the dialog is tight, and the description is vivid, but the story just doesn’t do it for me.

“Neom” by Lavie Tidhar is a lovely world-building tale. We follow Mariam as she goes about a usual day for her in the city of Neom, a geek-topia setup on the Arabian Peninsula. Mariam is a house-cleaner, so we get her lower class view of this otherwise high-and-mighty city, replete with all its victories and faults. As someone who grew up in a poor household with many parallels to Mariam’s life, I felt connected in a real way to the narrative style.

That said, I can’t say there’s much of a story here, in the traditional sense. It feels like the first chapter of a larger book and the ending—or non-ending, as it were—reinforces this feeling.

I’d love to see this expanded into a larger story with risks and consequences; I think it’d be fantastic. As it is, this iteration falls short of my expectations.

Mike Wyant, Jr. is an ex-IT guy who has finally committed to a writing life out in the Middle of Nowhere, New York.