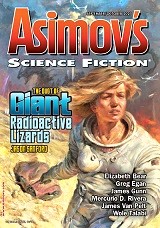 “Sleep and the Soul” by Greg Egan

“The Dust of Giant Radioactive Lizards” by Jason Sanford

“Billie the Kid” by Rick Wilber

“An Arc of Electric Skin” by Wole Talabi

“The Apocalypse and the Lake Mattamuskeet Gnat” by Peter Wood

“Your Luminous Heart, Bound in Red” by S. Qiouyi Lu

“A Blessing of Unicorns” by Elizabeth Bear (reprint, not reviewed)

In addition to stories set in alternate pasts and imagined futures, this issue contains the last published work from a Grand Master of science fiction, as well as a tribute to the recently deceased author.

“Sleep and the Soul” by Greg Egan takes place in the United States in the first half of the Nineteenth Century. In this version of the past, however, people do not sleep, and any form of unconsciousness is considered to be equivalent to death. The protagonist is knocked out in an accident and is buried. He manages to escape from his coffin, but finds out that his parents think of him as a demon wearing their dead son’s body. He leaves his home with the woman he loves, taking on a new identity in an attempt to avoid the mobs who would destroy him as a monster. He goes on to become involved with a showman and a dentist experimenting with anesthesia.

The author’s portrait of the 1850’s is entirely convincing, making the story’s fantasy content believable. The implications of the premise are developed in a thoughtful, logical manner.

In “The Dust of Giant Radioactive Lizards” by Jason Sanford, an experiment in dimensional travel has a bizarre effect. A woman is trapped in a bubble of timelessness. Anything that approaches her closely freezes in time, and then ages billions of years when it leaves her vicinity. After decades living this way, an encounter with a dead woman’s body leads to an odyssey into her past.

This synopsis does not do justice to a complex premise that is difficult to explain. Flashbacks to the protagonist’s childhood are more effective than the story’s science fiction content, which is often confusing and implausible.

“Singular Days” is the final story from James Gunn, serving as a coda to a career that lasted more than seven decades. A disease puts all human beings into comas. One by one, the robots that now manage the world wake these people. The protagonist is a newly revived woman who explores this strange new future, and discovers what the machines want from humanity.

Despite the apocalyptic theme, this is a quiet, gentle story, avoiding melodrama. Consisting of several very short chapters, it reads like an outline for a more fully developed work. The conclusion is somewhat open-ended, and the reader is likely to wish for something more.

The narrator of “Shooting at Warner’s Bay” by Michèle Laframboise is an actress, with a role in a monster movie being filmed on a remote, uninhabited island. The place turns out to have its own weird dangers.

This story about making a cheap horror film is, itself, similar to a B movie. The most appealing aspect of it may be the narrator’s cynical, sardonic view of the film business.

“Filaments” by Mercurio D. Rivera takes place on a distant planet, recently abandoned by its human colonists. The last two people on the world are a divorced couple who lost their child to the planet’s unsuspected menace. The place is inhabited by a strange form of life, that responds to human emotions in ways that can become deadly.

Given the extreme danger of the environment, it seems foolish for the two characters to spend time collecting their possessions before leaving, when a stray thought could mean disaster. With the death of a child and a bitter divorce, the story has strong emotional power, but of a depressing kind.

“Billie the Kid” by Rick Wilber offers a different version of the last days of World War Two. Although Germany has already surrendered to the Allies, and Japan is near defeat, a gigantic Japanese submarine equipped with airplanes approaches the California coast. Its mission is to drop the single atomic bomb built by the Nazis on Los Angeles. The title character is an athletic teenage girl, who not only becomes a professional baseball player, but aids a pair of time travelers as they struggle to prevent the destruction of the city.

The story is told from multiple points of view, with some sections taking place during the war, and others narrated by the baseball player when she is an elderly woman. In lesser hands, this technique might have been awkward, but the author manages to keep everything perfectly balanced. In addition to an exciting plot, the work offers a nostalgic look at baseball and Hollywood in the 1940’s.

“An Arc of Electric Skin” by Nigerian writer Wole Talabi features a man who undergoes an experiment to greatly increase his body’s conduction of electricity. Although intended as a medical treatment, he uses it to fight an oppressive government.

The story’s tragic mood cannot disguise the fact that this is, in essence, a work of superhero fiction. The fact that the main character is executed is announced at the start of the story, adding poignancy but lessening suspense. The plot raises serious political issues that are well worth considering.

“The Apocalypse and the Lake Mattamuskeet Gnat” by Peter Wood is set in an alternate version of the 1970’s. A part of North Carolina is cut off from the rest of the world by an unexplained force field. Those living inside survive by growing crops and scavenging, while facing a self-styled militia after their goods. Capture by the militia and the arrival of National Guard troops lead to the discovery of the cause of the phenomenon.

Although not a comedy, the story is told in a tongue-in-cheek manner, with the breakdown of civilization treated as an annoying but not horrible situation by the protagonists. The explanation for the force field may seem unoriginal to many readers of science fiction.

The story carries a content warning for those who may be disturbed by a plot involving bondage and domination, but most mature readers will not find it offensive. The two characters share a past, which adds little to the story. Some may find the use of second person present tense pretentious.

The title of “The Bahnhof Drive-In” by James Van Pelt refers to an outdoor movie theater in the middle of nowhere. A pair of high school students arrive at the isolated drive-in, and discover that the staff and patrons are very odd.

This is a quirky tale, without a complete explanation for the weird beings the teenagers meet. The plot is certainly offbeat, but it may strike some readers as little more than a shaggy dog story.

All the characters in “Matriphagy” by Naomi Kanakia are spiders, but they speak and act much like people. This brief story deals with a pregnant spider and her husband, as they debate whether they should allow their numerous unborn offspring to feed on the mother’s body. The intent may be to offer a darkly comic look at the challenges of parenthood. How readers react to this little tale may depend on how they feel about children and spiders.

Victoria Silverwolf would like to point out that this issue’s reprint appeared as an audiobook last year.