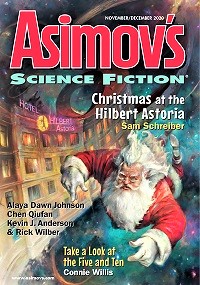 “Christmas at the Hilbert Astoria” by Sam Schreiber

“The Mirages” by Alaya Dawn Johnson

“Grief, as Faithful as My Hound” by Marissa Lingen

“Return From the Stars” by James Gunn

“Pull It From the Root” by Zack Be

“Return to Glory” by Jack McDevitt

“Take a Look at the Five and Ten” by Connie Willis

“Christmas at the Hilbert Astoria” by Sam Schreiber takes place at a hotel with an infinite number of rooms, although these only come into existence when occupied. Among the inhabitants are a flying monkey, a minotaur, sentient gems, intelligent neutron stars, and other bizarre guests. The protagonist is Santa Claus himself. He has to investigate a series of unexplained murders that somehow involve empty hotel rooms, which, by definition, should not exist at all.

This wild romp moves at a breakneck pace, leaving the reader breathless. The author has a remarkably inventive imagination. The result is a story that is never boring, but may seem overly chaotic.

Mexico in a dystopian future is the setting for “The Mirages” by Alaya Dawn Johnson. An extremely hot and dry climate drives those who can afford it into underground communities. Those left above suffer not only from the weather, but from disease. A lucky few are allowed to emigrate to the far north.

The protagonist is a disgraced educator whose wife left him for another man, who can help her and her young daughter escape the withering heat. He pays a final visit to his family, forcing him to face the truth about himself.

The author creates a detailed and convincing background, as well as fully developed characters with a realistic combination of faults and virtues. The situation offers no easy answers for anyone, and the resolution is believably ambiguous.

“The Hind” by Kevin J. Anderson & Rick Wilber is set on a generation starship that has suffered a serious accident during its long voyage. Because of the vessel’s limited resources, the pregnant protagonist must kill a member of the crew who is designated by the ruling council to be undesirable, or be forced to live as a barely surviving outlaw. After her first two attempts end in failure, for very different reasons, she discovers another choice.

The grim premise leads to intense and suspenseful scenes, as the main character sets out to murder an elderly woman, and then a brutal rapist. The mood of the story changes drastically in its second half, when another possibility opens up for her. The shift in tone is jarring, and the reader may wonder why this alternative to homicide was not discovered earlier.

Aliens resembling orange blobs show up on Earth in “Grief, as Faithful as My Hound” by Marissa Lingen. For no known reason, they follow certain people around. They make no attempt to communicate, and do not interact with humans in any way except to accompany them wherever they go. The narrator is one such person, whose alien is by her side as she witnesses her elderly mother die in a hospice, then goes through the mourning process.

One has to wonder what the purpose of the aliens might be in the story, as it is otherwise an entirely realistic study of loss and sorrow. As such, it is quite effective. The end of the story, in particular, adds a plot element, without speculative content, that could have replaced the aliens entirely.

Different levels of reality appear in “Forger Mr. Z” by Chen Qiufan, translated from Chinese by Andy Dudak. The narrator is a failed Chinese science fiction writer. In order to fool a publisher, he creates a fictional Albanian writer, and dreams up one of the supposed author’s works. Soon he receives messages from the imaginary writer and the characters created by him. He later winds up in the world of a children’s science fiction story, and finds out that his own life is no more real than any of these others.

The theme is reminiscent of those found in many of the works of Philp K. Dick, in which one can never be certain what is real and what is not. The reader is likely to get as mixed up by the various entangled universes as the narrator, which may be the author’s point. In any case, the story is clever, if not compelling.

In “Return from the Stars” by James Gunn, a robot returns to Earth after preparing a new home for humanity on a planet in another solar system. Centuries have gone by since it left, and the home world is now completely covered with water, with no surviving people. The robot discovers two recordings of human consciousness, gives them robotic bodies, and begins a project to complete its mission.

This is a prime example of science fiction as the literature of ideas. Although the robot and the two recorded humans are given enough character to allow the reader to care about them, the main appeal of this story is the way in which many speculative concepts come together in a coherent way. This sweeping vision of space and time is sure to create a true sense of wonder.

The narrator of “Footprint” by Kate Maruyama is a woman dying of cancer. Her brilliant daughter, who has invented an oxygen-producing system that allows long-distance space travel, visits with her spouse, to announce that they are going to join colonists journeying to Mars. The narrator struggles with the choice of whether or not to reveal her terminal illness before they leave.

This is mostly an intimate character study, with many flashbacks to the narrator’s life with her daughter when she was a child and a young woman. This aspect of the story works well. The setting is a future of severe environmental destruction; a world in which many common fruits and vegetables no longer exist. The notion that settling Mars would relieve some of the population pressure on Earth is difficult to accept, given the limitations of any kind of believable space travel, and the harsh environment of the red planet.

“Pull it From the Root” by Zack Be is an action-packed adventure set on one of the moons of a giant planet orbiting a distant star. The narrator, falsely accused of a serious crime, assumes a new identity. Her past catches up with her when a gang of criminals with highly advanced biotechnological enhancements show up at her workplace, seeking an illegal drug smuggled in by one of her employers. The gang might recognize her as a wanted felon with a price on her head. The presence of deadly alien parasites adds threatening complications.

There is no shortage of excitement in the narrator’s dangerous quest to protect herself and those who hired her. The story has the feeling of an old pulp yarn brought up-to-date with modern science fiction themes. It is likely to satisfy those looking for escapist entertainment.

“The Long Iapetan Night” by Julie Novakova, translated from Czech by the author, takes place some centuries after twin disasters, a gigantic volcanic eruption and a huge solar flare, threatened human civilization. When this happened, an expedition to Iapetus, a moon of Saturn, lost all contact with Earth and was forced to survive on its own. A second team of space travelers returns to the moon after society recovers. They investigate the first expedition’s base, leading to tragedy and a shocking discovery.

The story has the mood of a science fiction horror story. To this reader’s relief, the menace did not turn out to be alien monsters. The truth is more original, more believable, and more frightening. The author vividly portrays both the beauty and the terror of space in a convincing manner.

In “Return to Glory” by Jack McDevitt, people living in a utopian future discover a very old artifact; a fan film based on Star Trek. Viewing this antique movie leads to a renewed interest in space travel among these folks, who have turned their backs on the universe. This tribute to the power of science fiction might be seen as a love letter to SF fans. Some might view it as too self-congratulatory, like rock songs celebrating rock ‘n’ roll.

Speculative neurobiology and a sentimental love story meet in “Take a Look at the Five and Ten” by Connie Willis. An elderly woman is constantly telling anyone who will listen long, detailed, seemingly pointless stories about the time she worked at Woolworth’s during Christmas when she was young. A researcher suspects she has a syndrome known as flashbulb memory, in which a traumatic event leads to extremely vivid memories. The woman’s recollections of the time all seem like pleasant ones, so he tries to find out if she is repressing a bad memory. Unknown to him, the woman has her own plan.

This brief synopsis is somewhat misleading, as the science fiction aspects of the plot are minimal, and mostly serve as an excuse for the narrator to fall in love with the researcher. In essence, this is a Hallmark Christmas romance movie, with a touch of speculative content. Ironically, the narrator’s unpleasant relatives are much more memorable characters than the nice people in the story.

Victoria Silverwolf is not very fond of the holiday season.