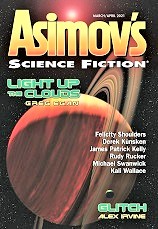 “Mrs. Piper Between the Sea and the Sky” by Kali Wallace

“Light Up the Clouds” by Greg Egan

A pair of novellas serve as bookends to nine shorter works of fiction in this issue. The works take readers into futures far and near, as well as alternate versions of the past and the present.

The magazine opens strongly with “Glitch” by Alex Irvine. The setting is a future in which one’s consciousness can be recorded and then downloaded into a new body after death, if one can pay the price. People can also swap minds, using similar technology, or hitch rides inside the bodies of other persons.

The story begins with the protagonist in a new body, after being killed in a bombing. The terrorists tried to block the minds of their victims from being resurrected, but a technical problem caused the main character to share his body with the mind of the bomber, who also died during the attack. He struggles to prevent the terrorist from taking over completely, while evading the authorities and fighting to stop another bombing.

The author creates a vivid and suspenseful tale, while offering an interesting look at a future world facing many of the same problems as our own. The complex ways in which consciousness can be transferred from one body to another might have been confusing in a less expertly crafted story, but the fast-moving plot is always completely clear.

“Somebody’s Child” by Felicity Shoulders takes place in an alternate version of the present. For several years, young women have been paid by the United States government to serve as surrogate mothers for stored embryos that would have otherwise been discarded. Their daughters often go on to serve the same role. One such mother receives a message from a couple who believe her child is their biological granddaughter. An investigation leads to the uncovering of a hidden scandal.

This story has a great deal of emotional appeal, as well as fully developed characters. The narrative lacks focus at times, shifting gears from the child’s search for her ancestors to the mother’s new romance to political shenanigans. Readers may not realize that the setting is a different version of our own world until late in the story, and the speculative elements are not strictly necessary to the plot.

In “The Same Old Story” by Anya Ow, a chef competes against others in an attempt to win a place in a lunar colony, away from a dangerously warming Earth. Flashbacks reveal how, as a child, she witnessed her relatives use food printers to recreate traditional dishes, then became a professional cook. She uses the printer to leave hidden messages in her dishes.

This is mostly a character study, as well as a detailed description of mouthwatering foods and the speculative technology used to create them. The subplot about the protagonist’s messages embedded in food is interesting, if not particularly relevant to the rest of the story.

“Mrs. Piper Between the Sea and the Sky” by Kali Wallace is a tale of alternate history set in the 1940s. Aliens arrive on Earth, ending the Second World War when they destroy both Germany and the Soviet Union for refusing to cooperate with them. The protagonist is a British secret agent, sent to the United States to capture a former war hero who chose to work with the aliens. If necessary, she is ready to kill to accomplish her mission. She witnesses the devastating effect the arrival of the aliens has on plants and animals, and learns something about the relationship between the married couple.

The premise is intriguing, but the conclusion is not fully resolved, leaving the reader wanting to know more. The story’s mood ranges from Lovecraftian cosmic horror to spy thriller to domestic drama. The transitions among these various themes are not always smooth.

“Grandma +5° C” by James Patrick Kelly takes place in a world devastated by global warming. Self-appointed rangers, blaming elderly Baby Boomers for the destruction of the environment, round them up to be held in detention camps. The main character is a young woman whose great-grandmother is hiding from the rangers. She returns home to find a ranger confronting the older woman, forcing her to make a difficult decision.

It’s hard to say where the author’s sympathies lie, as all of the characters are less than admirable, although some may have better reason than others. The great-grandmother, well over a century old, is able to appear several years younger, thanks to anti-aging drugs. This plot device seems too convenient to be entirely plausible.

“RE: Bubble 476” by A.T. Greenblatt takes the form of messages between two people working in different pocket universes. Time acts in a strange way in these parallel worlds, so some of these messages are received before they are sent. Messages from the future suggest that both universes face deadly crises.

The characters come across as likable, if rather adolescent. The premise of researchers journeying to multiple realities is interesting, but never becomes believable.

“Mary Mary” by Rudy Rucker features an elderly woman dying of cancer. As in the magazine’s opening story, her consciousness can be stored, then transferred into a new body. She becomes involved in a complex plot involving an aging biotechnician scheming to release recorded minds from their servitude to the corporation that keeps them in storage.

There is much more to this story than this simple synopsis suggests. In particular, it is full of bizarre biotechnology. The author is famous for having a wild imagination, and it is on full display here. A touch of the supernatural at the end is out of place with the rest of the tale’s science fiction elements.

All the characters in “Flowers Like Needles” by Derek Künsken are alien inhabitants of a planet orbiting a pulsar. Their society is divided into warriors belonging to various philosophical schools and those who serve them. One such warrior seeks out a legendary master, in search of ultimate knowledge. The quest leads to battle as well as revolutionary ways of thinking.

The author creates a truly weird setting and unique characters. The plot may seem slightly less imaginative. In essence, this tale could have taken place in a human society containing students of the martial arts.

In “Sentient Being Blues” by Christopher Mark Rose, a robot is trapped with human workers in a mine. Unable to save their lives, it makes their last moments more bearable by performing blues. The narrator, working for a music company, takes the unexpectedly talented machine on a successful concert tour. An attack by fanatics who oppose robots acting like people leads to a crisis.

The blues-loving machine is an appealing character, and the author clearly shares the same affection for this form of traditional music. The story’s conclusion strains credibility in more than one way. It involves robots far more advanced than any others found in the story, and extreme foolishness on the part of humans. Allusions to the work of a noted science fiction author famous for his robot stories may raise eyebrows, especially in a magazine named after him.

The main character in “Dream Atlas” by Michael Swanwick is a researcher who discovers a way to communicate through time while dreaming. After a conversation with her future self, who shows her the way to achieve great success as a scientist, other beings become involved.

Despite the use of dreams, this is basically a time travel story, making use of familiar variations on the theme. Readers may admire the author’s cleverness, but are unlikely to be touched emotionally.

“Light Up the Clouds” by Greg Egan takes place in the atmosphere of a planet with two suns, one close and dim and the other bright and distant. The people who inhabit this world live in floating forests, between the surface of the planet, very far below, and vacuum above. Long ago, others left this world for another in the same solar system.

A glider pilot, soaring high enough to catch a glimpse beyond the constant layer of clouds, spots what seem to be spacecraft between her world and the nearby sun. The activities of these ships threaten the survival of the planet’s population. Using simple but ingenious technology, the story’s reluctant hero flies into space in order to contact the vessels and save his world from destruction.

The main appeal of this story is its intriguing worldbuilding. Some readers will also appreciate the greatly detailed description of the way in which low technology is used for space travel. Others will find this section of the story overly long and difficult to follow.

Victoria Silverwolf had to figure out how to insert the degree symbol into the title of one of these stories.