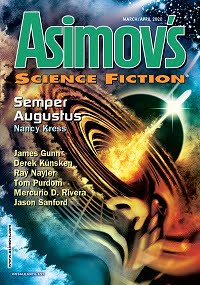 “In Our Stars” by James Gunn

“Rena in the Desert” by Lia Swope Mitchell

“Beyond the Tattered Veil of Stars” by Mercurio D. Riveria

“So Long as We Both” by Tom Purdom

“Return to the Red Castle” by Ray Nayler

The latest issue of this long-running publication offers stories from relatively new writers, as well as from seasoned veterans of science fiction.

“A Summary of Our Neighborhood’s Salvation After the Storm” by Jason Sanford takes place in Louisiana, after a devastating hurricane. This is a future in which, at the time of death, it is possible to upload a person’s consciousness into a computer simulation. A religious cult implants devices in the foreheads of their members that record their sins and virtuous deeds. Depending on how they behaved in life, when they die their minds enter either an artificial Heaven or an equally synthetic Hell. The plot involves a leader of the cult and his estranged wife, who no longer belongs to it. Her relatives and friends, barely surviving in the aftermath of the disaster, see that the abusive cultist gets what he deserves.

The premise is an interesting one, if implausible. Although history shows that people will believe almost anything in the name of religious faith, it’s hard to imagine that reasonably sane people would allow other people to condemn them to electronic damnation unless they blindly obey the cult’s demands. The cult leader is something of a stereotyped villain, less convincing than the other characters.

“In Our Stars” by SFWA Grand Master James Gunn follows the protagonist as he travels around the world, seeking answers to why everything seems to be going wrong in a future society of advanced technology. Accompanied by a computer simulation of his dead wife, he interviews a guru, a physicist, an astronomer, a computer scientist, and a philosopher, eventually coming up with a startling theory.

This is a prime example of idea fiction, with the characters serving mostly as spokespersons for the various notions they exchange. The hypothesis revealed at the end is an original and intriguing one, but this work seems more like a speculative essay than a real story.

In “Skin” by Garrett Ashley, blob-like beings wear synthetic bodies in the shape of people, in order to fit into human society. In this strange world, this is an accepted fact, with the disguised gelatinous creatures mingling freely with real people, sometimes even marrying them. The narrator is one such entity, who finds the original body bursting out through artificial skin.

This is a bizarre tale, requiring the reader to accept the idea that people would adopt sentient one-celled organisms, the size and shape of pancakes, as if they were human infants. The author shows great imagination, even if the story strains the suspension of disbelief to the breaking point.

“Rena in the Desert” by Lia Swope Mitchell takes place in a dystopian future United States, in which the middle of the country devolved into chaos after an unspecified crisis. The protagonist flees Chicago for the relative safety of the West Coast. While journeying through the desert, she comes across a sight that seems impossible. In the middle of the wasteland, she finds a motel open for business. It even has a swimming pool, an unimaginable luxury in a world running out of water. The place is fully automatic, with only a little girl living there. The motel turns out to be more difficult to leave than to enter.

The author creates an eerie mood, worthy of a Twilight Zone episode. The seemingly benign artificial intelligence running the motel turns out to be a formidable antagonist. The main character’s struggle to escape, and to rescue the child, creates a great deal of suspense.

In “Beyond the Tattered Veil of Stars” by Mercurio D. Rivera, a scientist creates a simulated Earth with a very different history. In this world, mammals never dominated the planet. Instead, sentient winged reptiles take the place of people.

The scientist is convinced that human beings can never avoid destroying themselves. Instead, she uses the reptilian beings to come up with technological solutions to the real world’s problems. She programs the simulation with various crises that threaten to destroy its inhabitants, so that they will come up with ways to survive. Things get out of hand when an old acquaintance, now an employee of an on-line news service, manipulates the simulation’s programming.

The basic theme is very similar to that of Theodore Sturgeon’s famous story “Microcosmic God.” Despite a lack of originality, this new variation on an old classic is worth reading. Notable is the fact that portions of the story take the form of a family history, told from the point of view of the reptiles.

“So Long as We Both” by long-time writer Tom Purdom takes place in a utopian future, where people with greatly extended lifespans live in comfort and luxury throughout the solar system. A wedded couple, both of whom were married to other people for nearly a century at a time, consult a robot counselor about their marital difficulties. The man wants to adopt a child right away. The woman agrees to do so, but wants to wait until she is ready. With the help of the robot, they reach a mutual understanding.

This is a quiet story, which makes use of the very long lives of its characters to make an important point about the transitory nature of all relationships, and the need to compromise to make them work. The author also points out the importance of living in the moment, even when the future seems eternal.

In “Return to the Red Castle” by Ray Nayler, interstellar travel involves making a copy of the voyager’s mind and projecting it into an artificial body on the target world. An attack by terrorists on this technology sends the travelers to uninhabitable planets, where their new bodies die. The protagonist is one such journeyer, whose consciousness returns to a new body on Earth centuries after she left. She visits the android who was her beloved childhood teacher, and deals with the artificial human’s mysterious loss of memory.

Although full of science fiction concepts, this is really an intimate tale, which might serve as an allegory for the tragedy of extreme forgetfulness, as in Alzheimer’s disease. The local color of the story’s Turkish setting is sometimes more interesting than its speculative content, which is not always relevant to the plot.

“Opportunity Space” by Nathan Hillstrom makes use of a similar device as the previous story. In this case, the main character’s mind enters an artificial body aboard a spacecraft inhabited by water-dwelling beings similar to cephalopods. The complex plot involves deadly automated invaders, reminiscent of Fred Saberhagen’s Berzerkers; the peculiar neurobiology of the aliens; and the desire of the protagonist’s employers to make a profit from their effort to protect the aliens from the invaders.

The author combines battle scenes appropriate to space opera with flashbacks to the main character’s decision to leave Earth, and with philosophical discussions of the profit motive and the aliens’ way of sharing knowledge. There is almost too much going on at once to fully appreciate, and some readers may find it difficult to follow the intricate storyline.

In “Tachyon Hearts Cannot Love” by Derek Künsken, faster-than-light technology allows for a kind of time travel. By looking back on Earth while journeying at such a speed, the narrator views the planet’s past. Vessels that travel at exactly the speed of light exist in a sort of timelessness, while vehicles that are even faster than that of the narrator allow for visions of the future. This brief work is more of a prose poem than a story, with evocative images rather than a real plot.

Rounding out the issue is “Semper Augustus” by award-winning author Nancy Kress. In this novella, aliens arrive in China, trading highly advanced technology for seemingly random biological specimens and works of art. China sells the technology to other countries, becoming the most powerful nation on Earth. In the United States, the resulting society is one of extreme income inequality, with many unemployed persons and an elite group of the super-rich, making use of the alien technology to increase their wealth and lead lives of luxury, protected by advanced security systems.

The plot follows the life of the protagonist from birth to adulthood. Her mother abandons her as soon as she is born, and she grows up in poverty with a strict grandmother. Her rare ability to remember perfectly everything she hears allows her to excel in school.

After an act of violence disrupts her life, a previously unknown, wealthy aunt adopts her, and she becomes a supermodel. This is hardly the end of the many twists and turns in her life, as she escapes the world of the rich, who have only contempt for the poor, and joins a group of rebels. She soon learns that the revolutionaries are far from perfect themselves. After many crises, she learns the truth about herself, and the reason the aliens came to Earth.

The author’s ability to combine fully developed characters with thoughtful speculation creates a compelling story. There are no easy answers to the problems raised in this vision of a deeply divided society, with the rebels often acting as badly as their oppressors do.

Victoria Silverwolf is surprised that this issue contains only ten stories, due to an unusual lack of flash fiction.