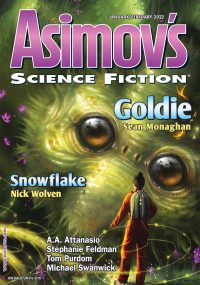 “River of Stars, Bridge of Shadows” by A.A. Attanasio

“The Roots of Our Memories” by Joel Armstrong

“The Beast of Tara” by Michael Swanwick

“The Boyfriend Trap” by Stephanie Feldman

This issue features a pair of novellas, a trio of novelettes, and half a dozen short stories. Settings range from Earth in the near future to the depths of interstellar space in the far future.

“Snowflake” by Nick Wolven features a self-destructive pop music superstar. When her latest meltdown nearly leads to her death and threatens to end her career, brain surgery and a handheld device allows her to control her dangerous emotions. Although she is able to go back to performing, some of the personal magnetism that made her a star is lost. The last stop on a worldwide comeback tour ends in a way that is both tragic and inspirational.

The speculative technology is plausible, and other subtle futuristic touches create a convincing portrait of the day after tomorrow. Equally realistic is an intimate look at the unglamorous backstage world of those who work with a celebrity. In combination with fully developed characters, the result is a compelling story that holds the reader’s attention from the beginning.

The protagonist of “Welcome Home” by Jendayi Brooks-Flemister is a single mother who is about to lose custody of her daughter unless she can find affordable housing. In what almost seems like a miracle, she is able to afford the rent on a new house equipped with an artificial intelligence. The AI soon becomes the primary caregiver for the little girl, leaving the mother with ambiguous feelings about her new home.

The premise is intriguing, and the picture of a benign but overbearing system taking over the protagonist’s life raises provocative questions. Readers may wish for more, as the ending leaves the situation unresolved.

“River of Stars, Bridge of Shadows” by A.A. Attanasio is a difficult story to synopsize, given its exotic far future setting and the author’s frequent use of neologisms. Suffice to say that the basic plot concerns a starship about to be destroyed by a neutron star, and the young woman who struggles to save the lives of those aboard.

This does not even offer a hint of the story’s strange background and bizarre characters, including human beings who have become sentient plasmas. The author often changes the narrative point of view from one paragraph to the next. This technique, as well as the constant use of undefined new words, makes for difficult reading. One cannot fault the author for lack of imagination, but great skill at creating a unique future cannot disguise the fact that the plot is, at heart, a melodramatic adventure story.

In “The Roots of Our Memories” by Joel Armstrong, fungal connections between the brains of dead bodies in cemeteries and hemlock trees allow people to experience the recorded thoughts of the deceased, and even engage in a limited form of communication with them. The narrator works at such a cemetery, and helps a young woman get in contact with her dead grandmother.

There is not much else to this story other than its unusual and interesting premise. The only touch of conflict comes when the narrator bends the rules slightly at the end, in a very minor way. The concept has emotional appeal, but more could have been done with it.

“Unmasking Black Bart” by Joel Richards takes place at a time in the near future when wearing holographic masks is a popular fad. The main character attends a high school reunion wearing the face of his teenage self, and tries to figure out if an old acquaintance is the person who has been robbing banks while disguised as a notorious criminal of the Old West.

There is even less plot than I may have suggested, as most of the story has the protagonist running into old friends, going out to dinner, visiting wineries, and so forth. Readers are left to decide for themselves if the suspect is really guilty of the robberies or not. As a slice of ordinary life, this sedate tale is plausible, but not very exciting.

In “October’s Feast” by Michèle Laframboise, two people accept an assignment to live on an alien world for several months. If they can find three edible foods on the planet, it will be colonized. A crisis leads to a struggle for survival, as well as a discovery concerning the world’s unusual trees.

Although the characters are appealing, the premise is implausible. The reader has to accept that a previous attempt to colonize a planet failed because the local plant and animal life was inedible; something one would expect to have been determined in advance. The need to find three edible foods seems arbitrary and limited; are the colonists expected to live on nothing else? Despite these flaws, the story does create some suspense during its survival scenes.

“The Beast of Tara” by Michael Swanwick involves a team of scientists in Ireland, working to recover sounds of the distant past from the traces they left in rocks. A young man shows up, claiming to be working for a school newspaper. He keeps messing up the equipment, seemingly by accident, until his real identity and motive are revealed. Another character turns out to be something other than what he seems.

The premise of hearing sounds from ancient times is interesting and reasonably plausible. The nature of the two strange characters is much less easy to accept, and makes the story something of a tall tale rather than serious science fiction. The final scene is likely to appeal to Hibernophiles.

In “Fasterpiece” by Ian Creasey, technology allows artists to work extremely quickly, creating large numbers of handcrafted works in brief periods of time. The artist experiences the full amount of time required for the piece, but the outside world only experiences the much shorter time.

The protagonist is the wife and agent of a painter, who joins a group of other artists in order to work together on a single masterpiece. Growing suspicious of the secretive project, she enters the time-enhanced world of the artists, and discovers its dangers.

The concept is intriguing, if one is able to suspend one’s disbelief in such an incredible technological advance. Once the main character goes after her husband, the story suddenly turns into a medieval fantasy, thanks to the virtual reality devices used by the artists. This sudden change in setting and genre is jarring, even if it has a scientific explanation.

The protagonist of “Long-Term Emergencies” by Tom Purdom is an expert on human relationships within a company. She works to lessen the effects of a squabble between two employees, which develops into a crisis when a third person elevates it into a major conflict.

This brief synopsis fails to convey the fact that this is a tale of the future, set in the asteroid belt. That’s because the science fiction elements play very little part in the plot, which could have easily taken place in a modern business corporation. Those interested in company politics may find it of interest.

The narrator of “The Boyfriend Trap” by Stephanie Feldman is having difficulties with her lover, so they go on vacation together in a remote cabin in the woods. She runs out of the place into the cold night after an argument, only to be lost in total darkness. A strange light leads her back to what seems to be the same cabin, but both the house and her lover have changed.

This is a very strange story, seemingly out of place in an issue full of tales that are definitely science fiction. It might be considered fantasy or psychological horror. The author creates an effectively eerie mood in a subtle way, but the plot may be too opaque for many readers.

“Goldie” by Sean Monaghan takes place on an alien world where high plateaus alternate with deep valleys. Gigantic animals, something like sloths the size of whales, crawl along the huge vines between the plateaus. Human scientists study the planet’s ecology, particularly the symbiotic relationship between the massive beasts and the world’s plant life. The climax involves the team’s senior member, who has been investigating the place for many years, and one of the enormous creatures, who is at the end of its life.

The most enjoyable part of this story is the worldbuilding, which paints a vivid picture of the interactions between the landscape and its living inhabitants. Less effective are the human characters, who often seem more like adolescents than mature professionals. Much of the narrative involves an affair between two of the scientists, who act like lovesick teenagers. The final scenes are emotionally powerful, in contrast with the rest of the work.