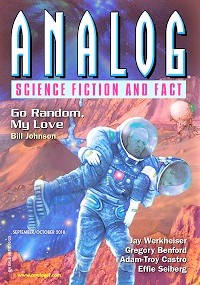 “Optimizing the Verified Good” by Effie Seiberg
“A Surprise Beginning” by Gregory Benford
“When the Rain Comes” by Ron Collins
“The Unnecessary Parts of the Story” by Adam-Troy Castro
“The Pendant Lens” by Sean McMullen
“. . . And He Built a Crooked Hub” by Christopher L. Bennett
“Shepherd Moon” by Premee Mohamed
“It Came from the Coffee Maker” by Martin L. Shoemaker
“Nevertheless” by Elizabeth Rubio
“The Plaything on the Tesseract Wall” by Larry Hodges
“Off-Road” by Harry Lang
“Trapezium” by Tony Ballantyne
“Black Shores” by Darren Speegle
“Impetus” by Shane Landry
“Harry and the Lewises” by Edward M. Lerner

“Go Random, My Love” by Bill Johnson features a dense, complex background which is not always clear. The main character is a man of the Twentieth Century who has somehow survived, or been revived, into the far future. He receives a distress call from a woman out of his past. Her spaceship crashes on a super-cold world and she is badly injured. To rescue her, he must overcome the deadly planet and unexpected foes.

The basic plot of this story is straightforward. There are many unexplained references to future events and organizations. Although this gives a sense of reality to a simple tale of adventure, it confuses the reader.

The protagonist of “Optimizing the Verified Good” by Effie Seiberg is a robot. It once fought other robots in gladiatorial contests. It sustained severe damage, and now only cleans the arena. The robots experience the equivalent of pain, to increase their efficiency in battle. The cleaning robot faces many obstacles in its struggle to relieve the suffering of itself and its fellow machines. Although no humans appear in this story, it is a moving tale of an appealing character trying to do the right thing.

The narrator of “A Surprise Beginning” by Gregory Benford is a fictional version of the author. He unexpectedly travels instantly from 2017 to 2037. He finds a future world dealing with serious environmental problems through advanced technology. On a more personal level, he visits his twin brother and learns more about his strange journey through time. Although there is a suggested explanation for this phenomenon, involving astrophysics, the story is more concerned with a cautiously optimistic vision of the decades to come. The author convinces the reader that the future can be better than the present.

Another robot protagonist appears in “When the Rain Comes” by Ron Collins. She serves an unseen man who observes the ecological condition of a forest from a tall observation post. She also takes on some of his personality traits. It soon becomes clear what happened to her master. This is a brief mood piece, featuring only one character. The title and plot suggest that it is a tribute to Ray Bradbury’s classic story “There Will Come Soft Rains.” It is more than just a rehash of an old theme, however, and provides a strong emotional impact.

“The Unnecessary Parts of the Story” by Adam-Troy Castro, as the title suggests, is a work of metafiction. Instead of names, almost all of the characters are given generic terms like the Pragmatic Woman and the Cold Scientist. The plot is similar to many science fiction horror stories. An alien organism possesses one of the crew of a starship. (He is the only character given a specific name.) This results in a violent struggle, leading to multiple deaths and an ironic ending. Although the reader will appreciate the story’s sardonic look at typical monster movie clichés, the narrative style is too distant to be fully engaging.

We leave the future for the past in “The Pendant Lens” by Sean McMullen. Not long after the French Revolution, an English mechanic journeys to Paris to repair a steam engine. It turns out that Robespierre, infamous for the Reign of Terror, uses the device in conjunction with a primitive electric lantern and a mysterious lens to foresee probable futures. The Englishman knows that if he fails to fix the machine, and later to make improvements in it, he will face the guillotine.

This is an unusual and intriguing work of historical science fiction. The author creates a memorable character in the person of a strong-willed woman who works with Robespierre. The protagonist learns to fear and respect her, and eventually they must trust each other.

“. . . And He Built a Crooked Hub” by Christopher L. Bennett is one of a series of stories involving instantaneous interstellar travel from so-called Hubpoints. This one does not directly involve such journeys. Instead, it is set mostly inside a multidimensional accommodation for many alien species. For reasons not immediately clear, the inhabitants cannot leave the place. Instead, they wind up, seemingly at random, in other rooms within it. This leads to multiple complications, involving a spy, a strange puzzle box, and many unexpected encounters.

This is a comic story with the flavor of a bedroom farce. The author’s afterword makes it clear that its inspirations are Robert A. Heinlein’s famous story “‘—And He Built a Crooked House—'” and the stateroom scene from A Night at the Opera. References to Star Wars and James Bond movies make it difficult to accept the story’s distant future setting. Although appropriate for a sex comedy, the main alien’s constant lusting after human females becomes tiresome. Those in search of very light entertainment will best appreciate this madcap tale.

The protagonist of “Shepherd Moon” by Premee Mohamed is a pilot who works for a private space agency. NASA hires her company to retrieve the body of a great scientist who died in space. Adding to the difficulty of the task is the fact that the dead man was once her lover. As if this were not enough, her supervisor expects her to provide good publicity for the agency. A crisis during the mission forces her to use all her skills and overcome her emotional turmoil.

This is a realistic story with an appealing, very believable main character. The multiple challenges facing her create a great deal of suspense. The mood is a fine balance of triumph and tragedy.

“It Came from the Coffee Maker” by Martin L. Shoemaker features an artificial intelligence whose only task is to operate a coffee machine. Bored by its trivial job, it fantasizes about exacting revenge on humanity. The only barriers to carrying out its schemes are Isaac Asimov’s Three Laws of Robotics, which prevent it from rebelling. The AI’s sardonic narrative tone is enjoyable, and the twist ending is clever. As the reference to Asimov indicates, this is a science fiction story best suited for loyal fans of the genre.

“Nevertheless” by Elizabeth Rubio takes place aboard a generation starship. The protagonist works for the Housekeeping department. Although she studied for a position with the Life Support department, her obesity led to an incident that forced her to accept a lesser assignment. When a crisis occurs, she uses her knowledge and talents to tackle a hazardous task. The reader is certain to cheer on the unglamorous but resourceful heroine. The starship seems much more believable than most fictional spacecraft.

The latest Probability Zero offering is “The Plaything on the Tesseract Wall” by Larry Hodges. The parents of a young four-dimensional being forbid her to interfere with the three-dimensional humans she observes. Left alone, she disobeys, like any other naughty child. The consequences are unexpected. This very short fable, reminiscent of Edwin A. Abbot’s mathematical fantasy Flatland, has a gentle lesson to teach.

The heroes of “Off-Road” by Harry Lang are two truck drivers on a recently colonized Mars. During a routine run, scientists ask them to investigate an anomaly located at a short distance off their usual path. A sudden sandstorm turns the assignment into a struggle to make it back to the colony alive. Like other writers in this issue, the author creates a plausible vision of humanity’s future beyond Earth, seen from the viewpoint of ordinary workers. The setting is vivid and the characters are likable.

“Trapezium” by Tony Ballantyne takes place aboard a sentient starship. The three human beings aboard her accept a high-paying assignment to transport a dangerous alien to a scientific research station. The being has no body of its own, but is a program that constructs a physical form from whatever materials are available. The alien seems only curious at first, examining all parts of the starship. It refrains from attacking the humans only because it knows, and they know, that they have a weapon aboard that can destroy it. A deadly cat-and-mouse game begins, complicated by the fact that neither the alien nor the crew know what the weapon might be.

This story combines tension with a scientific puzzle. The background is imaginative and complicated, without being unclear. The fact that the humans are told they have a weapon, but are not told what it is, seems contrived and implausible. Since this is the main premise of the story, it is a serious flaw in an otherwise enjoyable tale of suspense.

In “Black Shores” by Darren Speegle, a violent sea storm strands two human tourists and their alien guide on a bleak part of the alien’s planet. They make their way to an abandoned spaceport. Warning the humans of the sinister inhabitants of the area, who make an art out of torture and murder, the alien goes off to explore and leaves them alone in the eerie place. A nearby tower, topped with a spinning cube inside a ring, turns out to play an important part in the dark secrets of the spaceport. This is a grim story, with gruesome scenes of violence. Many readers will find the resolution unsatisfactory and distasteful.

“Impetus” by Shane Landry takes place in a future Japan with advanced technology, but high unemployment and heavy taxes to support a large number of elderly citizens. The father of the protagonist has cancer. Surgery might cure it, but the family cannot afford the cost. The daughter used to participate in a sporting event in which competitors raced and did dangerous stunts on an obstacle course, while wearing powered armor. (Her father did the same thing in his younger days.) She stopped after sustaining injuries during an unsuccessful attempt to perform a particularly difficult maneuver. With the help of her tech-savvy little brother, she puts the racing suit on again in the hope of earning enough prize money to save her father’s life.

The competition is thrilling, but the real strength of this story is in its characters. Although the main character is not always successful in everything she sets out to accomplish, she maintains her courage and dignity.

Finishing the issue is the novella “Harry and the Lewises” by Edward M. Lerner. A failed historian turned tabloid reporter accepts an assignment from the wealthy daughter of his publisher. Related to one of the members of the Lewis and Clark expedition, she hires the reporter to find out the truth about Meriwether Lewis’s mysterious death. (Historians still disagree as to whether it was suicide or murder.) The reporter goes through Lewis’s diary and retraces his path from St. Louis to the Pacific Ocean. Eventually he discovers what really happened in 1809.

The revelation will not come as a surprise to readers of science fiction. The author obviously studied the famous expedition carefully, and the extrapolation from certain odd events in history to their fictional explanation is convincing. The style is very smooth and readable, making the story seem shorter than it is.

Victoria Silverwolf has seen all the Marx Brothers movies.