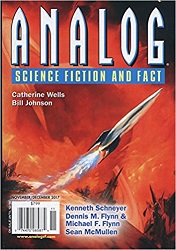 “Keepsakes” by Kenneth Schneyer
“Laminated Moose Zombies and Other Road Maintenance Problems” by Dennis M. Flynn & Michael F. Flynn
“Downsized” by Bud Sparhawk
“New Teeth” by James Sallis
“Luscinia” by Robert Reed
“Fermi’s Slime” by Tom Jolly
“Quirks” by Marie Vibbert
“Time Travel Is Only for the Poor” by S.L. Huang
“Papoose Lake” by Richard A. Lovett
“The Pilgrimage” by Edward M. Lerner
“Hot Air” by Igor Teper
“Kindle No Flame” by Stephen R. Loftus-Mercer
“Two Hours at Frontier” by Sean McMullen
“Reentry” by Brendan DuBois
“Weaponized” by Jay O’Connell
“Housekeeping, 100 XP” by Brenta Blevins
“And Then They Were Gone” by Ian Creasey
“How Val Finally Escaped from the Basement” by Scott Edelman
“Native Seeds” by Catherine Wells

“Hybrid, Blue, by Firelight” by Bill Johnson starts out the November/December Analog with a story of time travel/alternate history. It’s set in a way where Martin and his AI Artie are busy negotiating a deal with humans from different timelines. But trouble occurs when some of Martin’s people in this zone no longer respond to messages. The theme here is both time travel and genetic mutations. The story is part of a series, the rest of which I haven’t read, but it still holds up quite well, and the banter between Martin and Artie is a strong point.

Kenneth Schneyer‘s “Keepsakes” are copies of people from certain points in their lives, with the memories of that point and are used to remind their original of events that have faded somewhat from memory. Eugenia’s father made keepsakes of her at every birthday and she discovers that one of her younger selves remembered a horrible secret—the murder of her mother. The story starts with an intriguing idea and deals with the ramifications of it in that case and in the several other aspects with other characters. Definitely a story of ideas, though there’s no skimping on the characters.

“Laminated Moose Zombies and Other Road Maintenance Problems” by Dennis M. Flynn & Michael F. Flynn is an extremely frustrating story. It’s set in Alaska where a fungus brings the dead back to life. Bobby Jack works in highway maintenance, which often involved stopping the animated corpses and encasing them in plastic laminate in an effort to keep the fungus from spreading. The story then works in a chilling twist that leaves room for some fascinating possibilities—until the authors tie up the story by resorting to a joke that was clichéd in the 1940s. I wish they had done more to deal with the possibilities they had brought up instead of using it as a vehicle for a cheap ending.

Bud Sparhawk contributes “Downsized.” Matthew lives in FarView, a space station retirement home for the very rich. Resources are still tight, though, and when Matthew’s wife dies, he is required to move to smaller quarters. Matthew tries to fight it, but has to accept the result. What’s interesting is the way he finds something new to be involved with, that gives the story a nice twist and ends up going where I hadn’t expected. Overall, a very successful story.

“New Teeth” is set in a world where some sort of creature is taking over the bodies of people like hermit crabs looking for a new shell. Walsh’s job is to hunt them down and kill them, even though it’s a bit ambiguous as to whether they exist. James Sallis writes about Walsh’s misgivings and does a good job of getting into the head of a man with a dirty job that wears him down.

“Luscinia” by Robert Reed tells about Luscinia Jakes, a wealthy widow who sells all her fancy homes to live in the street, and eventually is caught in the dilemma of to whom to give her fortune. This is a soggy slice of life that never dramatizes or shows anything and reads like a description of a story instead of an actual story.

Tom Jolly writes a classic story of ideas with “Fermi’s Slime.” Some space explorers land on the planet Rocinante, which is home to a bacterial colony of slime that seems to have some unusual qualities. The story plays with the concept of what defines intelligence in an intriguing manner.

“Quirks” by Marie Vibbert is about Stosh, a union carpenter, trying to work in a world where he is undercut by 3D printing and people who want to steal or buy the knowledge needed to do the job properly. But the value of the knowledge—not the skills, but the little details you learn in years of working—is a temptation. An interesting idea and Stosh is a man with some conflict between money and doing what’s right.

S.L. Huang‘s “Time Travel Is Only for the Poor” has a unique way of dealing with the homeless: If they have any money at all, they are picked up and put in cryogenic deep freeze, the money invested until the compound interest makes them rich. Orson is happily homeless, but is caught up and sentenced to this fate, but a lawyer shows up to appeal the case and keep Orson from the freeze. The real strength of this story is Orson himself, a man with problems but who is happiest on his own and on the street. Definitely a top story.

The protagonist in “Papoose Lake” has a friend Tom who is hip deep in conspiracy paranoia and getting worse, causing serious problems. In order to get Tom to back off, he enlists a friend to help Tom deal with the problem. Richard A. Lovett‘s story holds no surprises or roadblocks, but its entire reason for being written is to make a very strong point about our thinking.

“The Pilgrimage” by Edward M. Lerner is a Probability Zero bit of flash fiction about the narrator saying goodbye to his friend Mike. The extrapolation is interesting and shows a new and unexpected downside to technology.

“Kindle No Flame” by Stephen R. Loftus-Mercer revisits a concept used years ago by Stanislaw Lem, though for a different effect. The narrator is a librarian who is visiting the Bodleian Library at Oxford, leaving behind a US where there are stories of some strange things happening to paper: a bacteria is eating it away and soon the library is involved in the issue. This is a story to sadden any book lover, and Loftus-Mercer manages to make it more than just a description of a disaster by showing the narrator’s feelings as it happens.

“Two Hours at Frontier” is about a space expedition gone wrong. On a trip to a small planetoid outside the orbit of Pluto, the crew awakes in metallic bodies, 5500 years after they set out. Sean McMullen‘s story deals with trying to figure out the mystery, but I didn’t find it particularly engaging.

“Reentry” by Brendan DuBois is the story of Nelson Cruz, a prospector who has returned to Earth after spending a thousand days alone after his ship was disabled in an accident. The story passes over the story of his survival to concentrate on what happens to him when he returns: kept in a hospital by the company who hired him and being forced to toe the company line. It’s a theme I gravitate towards and the story is well done, with Cruz’s struggle and ultimate resolution ultimately being very satisfying.

Jay O’Connell‘s “Weaponized” is the story of a man who discovers his lover is using a disturbing form of birth control. I liked the hint of ambiguity in the ending as the concept is explored. I’m amused that Analog, which in my youth was the most straitlaced of all science fiction magazines, is publishing a story that’s pretty specific about contraceptives.

“Housekeeping, 100 XP” is a look at the future of smart homes by Brenta Blevins. Set where homes are all controlled by computer, Lilit is a troubleshooter who deals with fixing problems with the software. A homeowner complains that the house keeps getting drone deliveries of items they never ordered. Her task is complicated by having to bring her grandmother along. This is a cute story that’s nicely constructed and fun to read.

Ian Creasey contribute “And Then They Were Gone.” It’s set where people can have their personalities uploaded into the postmortem realm, a sort of an electronic life after death. Samanda is shocked that her parents who decide that now that she’s 18, they’ll be doing it. Samanda has issues with her parents, and these just add to them. Not a bad story, but nothing in it really grabbed me.

The title character of “How Val Finally Escaped from the Basement” by Scott Edelman is working anonymously (deliberately so) when he is captured and made a prisoner in a basement. Val’s uncle had captured an alien and kept it captive for years. Val freed it and it offered cures for human diseases. The problem was that the captor—and most people, it seems—hate Val because their relatives died while the alien was kept captive and are now taking revenge on Val. I had trouble buying into the premise of the story. The delay was tragic, but it’s more an intellectual concern than a visceral one. More importantly, I found it hard to believe that Val was blamed, since he barely knew his uncle, so the justification of taking him prisoner and making him suffer fell flat with me. It did eventually come to a satisfactory ending, but there was too much nastiness for my taste.

“Native Seeds” by Catherine Wells is a novella set after a disastrous climate change event. Alfonso is one of the leaders of a small band of people who managed to survive using Native American practices. At the same time, Reuben is one of a group of people holed up in a mountain with most other survivors. He wants to talk them into joining the rest, but Alfonso is not sure about giving up their way of life. But the need for genetic diversity in the two small groups is a major concern. One thing I liked about the story was its time frame. Post-apocalyptic stories tend to either be decades later where things are forgotten, or very soon, where everyone remembers how life was before. In this case, some time has passed, but there are still people like Alfonso who remember life before, and others who don’t. The story also puts forth its dilemma and issues without simplifying the problems involved.

With the concentration on short stories, there is a lot of fiction in this issue, with much of a very high quality, concentrating mostly on introducing new concepts.