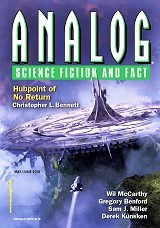 “Hubpoint of No Return” by Christopher L. Bennett
“Finding Their Footing” by Marissa Lingen
“Being Neighborly” by Kate MacLeod
“Two Point Oh” by Robert Reed
Probability Zero: “Another View of the Matter Addressed in Shelley’s ‘Ozymandias'” by Tim McDaniel
“The Willing Body, the Reluctant Heart” by Marie Vibbert
“While You Sleep, Computer Mice™ Earn Their Keep” by Buzz Dixon
“My Base Pair” by Sam J. Miller
“Prime Development Opportunity: Dirt” by Mary Soon Lee
“A Barrow for the Living” by Alison Wilgus
“Shooting Grouse” by Ian Creasey
“Mission Accomplished” by Stephen L. Burns
“Vigilance” by William Ledbetter

This issue of Analog has no story (unless “Hubpoint”) that you might not find in Asimov’s or some other magazine and seems oddly arranged, starting with a novella, moving to a novelette, and then to a solid wall of short stories (but there’s actually a mislabeled novelette (“Base Pair”) hiding in there). Even so, there are proportionally way too many short stories and many of them are very short indeed (four are shorter than the 2500 word Probability Zero and a couple more aren’t much longer). The quality drops significantly towards the end but the issue is fair overall, with several decent tales and one superb one.

In Colorado, not very many years in the future, Alan Szcyltz (just call him “Skulls”) is an 84-year-old whose wife was going senile until her treatments and his nursing of her for years bring her back. Then she divorces him, as she was intending to do before she started deteriorating. So, in a world of driverless cars and yogurt restaurants where patrons call him “Zhir,” he more or less accidentally starts a hard-drinking motorcycle club of similarly aged men who, despite the future’s anti-senescence treatments, are still not youthful, but are determined to make a world that is ignoring them take notice.

I’m going to start with a caveat about this superb story which paints its characters in complex ways: these guys have self-professed “jerk genes” and will be seen as outmoded dinosaurs by some. Of those who read it that way, some may love it anyway but some may lack sympathy for them and find it hard to engage with their problems and antics. Even they would probably have to admit it’s a pretty soundly executed tale. Others may see this story—which is not a traditional dystopia—as one of the more interesting analyses of the present and most frighteningly convincing depictions of the future (both societally and personally), they’ve read lately. It actually has some similarities, in a way, with The Forever War in its handling of a world that makes its characters strangers in their own lands, lost in time. That said, this story is fun and funny as well as dramatic and painful. The second teenage-“hood” of the partying bikers vividly recaptures the first time around and the freedom (and danger) of the road is evoked powerfully. Highly recommended—this is worth the price of admission all by itself.

“Hubpoint of No Return” by Christopher L. Bennett

In another installment of the Hub series, David is trying to get a leg up on the milieu with a biocomputer, more specifically, a fish, most specifically, “Art, a fishy intelligence.” A Mrawdj (a species of thieving cat-monkeys) swipes it, David chases after them and gets shanghaied. He ends up at a “Forward catapult” (a cool high-tech gizmo) and, with a mixup of post-it notes reminiscent of an extension of the scene in Independence Day (“Oops, had the silly thing in reverse”), ends up getting everyone stuck in the gizmo. Fortunately, his friend Nashira is worried about him and Rynyan is set on making amends for actions in previous installments so they work to save him. While not necessarily great art, it’s fine entertainment.

“Finding Their Footing” by Marissa Lingen

Along with a rich stranger, the recently widowed Anke (who’s also been divorced by her husband’s family) and her three kids are traveling to their new home (on Callisto), with a stopover at a vacation spot (the cryovolcanoes of Triton), when transportation problems (the anti-grav/propulsion failing while docked at the inner edge of the Oort cloud) cause them to get re-routed direct to their destination, with no vacation. Facing devastated kids, she explains that they can only buy new tickets if they’re willing to be virtually destitute at their new home but the kids really want to see their special sights.

As the synopsis hopefully makes clear, this is too easily “de-SFed” but other than that and its ultimate predictability, it’s well done.

“Being Neighborly” by Kate MacLeod

When two species separately colonize the same planet and have a general principle of non-interaction, confusions are bound to occur. This outwardly modest but thematically significant tale was a nice read and pleasingly low key.

An alien starship makes an emergency stop on Earth and the forty-three surviving aliens compete to build another. When things don’t go well for one of them, a human mobster is hired, ostensibly to motivate the workers.

This tries to be a hard-edged tale written in a hard-edged style and almost pulls it off but doesn’t entirely work for me and, much like a mobster leaving his threat implied, most of the story is outside its own frame.

Probability Zero: “Another View of the Matter Addressed in Shelley’s ‘Ozymandias'” by Tim McDaniel

Aliens build a demonstration pyramid and then say they can give Pharaoh most anything he wants. He wants another pyramid, despite all their many, many, extended efforts to get him to choose something else. Though just about 2500 words, this would have been better at half the length (and still wouldn’t have matched Shelley’s pithiness), though it does save one last kicker that’s pretty good.

“The Willing Body, the Reluctant Heart” by Marie Vibbert

Like “The Transmuted Child” (Michael Reid, Interzone #268), this very short story deals with partly self-sufficient hearts, lungs, brains, and bodies which can come together symbiotically. After aliens arrive, a few of them do just that in order to greet them. I’m not sure why the aliens having a body language and a heart language is so shocking given that the natives all speak to each other. This story doesn’t have as much to take literally as I’d like but it conveys an interesting perspective.

“While You Sleep, Computer Mice™ Earn Their Keep” by Buzz Dixon

As a bunch of mice (rats, actually) go about their business of cleaning a house, we learn about the business that supplies them, the computer that controls them, and so on. Things get intense when an unmodified sewer rat pops out of the toilet. The premise is kind of silly but, aside from the rat speech, the author makes the conversion from fairy tale to very short science fictional tale remarkably convincing and, of course, there’s a little more to it than there initially seems. Above average.

“My Base Pair” by Sam J. Miller

This is a character piece in which one guy talks about his unhealthy relationship with another guy who is a sort of clone of a celebrity born of technologically produced sperm cells derived from stolen originals (as many people are around the middle of the century). He had a falling out with the guy years ago and he’s currently trying to track him down again via another clone.

This is executed well enough except that I didn’t find the protagonist very interesting or convincing. Conversely, the story didn’t seem to find its own tech very interesting, though it actually spent too much time on the tech details (“I’ve suffered for my art; now it’s your turn“) if it was just going to be used for commentary on celebrity, society, and insanity. It’s quite possible this will resonate more with others, though.

“A Barrow for the Living” by Alison Wilgus

Three of four women are still alive on Mars, though in poor shape. Two of them go out to retrieve a supply drop while the one remaining behind accidentally sets the hab on fire. The “fourth fifth” of the tale deals with this and the pair’s return and rescue efforts. The story trails off from there until arriving at its off-key ending.

Like Madeline Ashby’s “Death on Mars” from the Visions, Ventures, Escape Velocities anthology, this features an all-female colony on Mars, not all of whom make it. Unlike that story, it’s written in present tense, doesn’t explain why four women set out on such a poorly designed mission or what happened to one of them, doesn’t have any character to like or care about, has a broken-backed and insufficient plot, and the plight of the characters is as unpleasant for the reader as it is for them.

A trio of “sabs” use fancy suits and holographic projectors to sabotage a grouse hunt because they think it’s barbaric and want to turn the grouse habitat of heather monoculture into diverse woodland… which will kill off the grouse. Meanwhile, the two lesbians of the trio try to balance activism and love. This story moves pretty quickly but the grouse conflict seems somewhat minor.

In this cli-fi tale, the government has locked up scientists and started trying to shoot down weather satellites it believes are responsible for weather problems. The scientists are put to work doing this and are overseen by an idiot, which makes their job of not doing their jobs easy. This sounds pretty silly, like it must be satire, but the story’s not funny, so just reads as heavy-handed.

Less than 900 words give us a scene between a grandfather and grandson talking about the future after recovery has begun from an asteroid strike that killed many and ruined more. Fine, but thin.