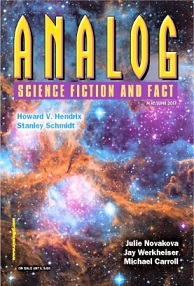 “The Girls with Kaleidoscope Eyes” by Howard Hendrix

“To See the Elephant” by Julie Novakova
“The Chatter of Monkeys” by Bond Elam
“A Grand Gesture” by Dave Creek
“Decrypted” by Eric Choi
“Seven Ways to Fall in Love with an Astronaut” by Dominica Phetteplace
“Focus” by Gord Sellar
“Ténéré” by Manny Frishberg and Edd Vick
“The Final Nail” by Stanley Schmidt
“The Speed of Faith in Vacuum” by Igor Teper
“Facebook Screamed and Screamed, Then I Ate It” by Sam Schreiber
“Vulture’s Nest” by Marissa Lingen
“In the Mists” by Bill Pronzini and Barry N. Malzberg
“The Return” by Bud Sparhawk
“Lips Together” by Ken Brady
“The Banffs” by Lavie Tidhar
“Where the Flock Wanders” by Andrew Barton
“Proteus” by Joe Pitkin
“Kepler’s Law” by Jay Werkheiser

A majority of the stories in this issue of the long-running science fiction magazine deal with biology, human and otherwise. The protagonists come from a wide variety of ethnic backgrounds, and settings range over all parts of the globe as well as other planets in the solar system and beyond.

“The Girls with Kaleidoscope Eyes” by Howard Hendrix is the lead novella. A government agent investigates an apparent attempt by a teacher to kill a classroom full of girls with a bomb, although at the last second he protected them from the explosion, seriously injuring himself in the process. She interviews the teacher while he is in custody in a hospital. He reveals his strange motive for his aborted crime, stating that “before there can exist a world of machines that can pass for people, there first must be a world of people that can pass for machines.” Further interviews with others associated with the girls lead to a complex plot involving a polygamous sect of Latter Day Saints and a secretive data collection center of the National Security Agency. Eventually the true nature of the girls becomes apparent, and the agent must decide what to do about them. Although the story consists mostly of conversations for most of its length, it does become suspenseful near its conclusion. There are hints that the author intends the story partly as a grim satire on the way in which some people pervert diversity and tolerance, as well as the state of modern education.

“To See the Elephant” by Julie Novakova takes place in Africa in the near future. Ninety percent of the continent’s elephants have been wiped out by a virus. A scientist comes to a wildlife preserve to investigate the strange behavior of one of the few remaining males, since even a single animal’s health could be critical to the survival of the species. She has a neural implant which allows her to experience the feelings of the elephant through electrodes on its skin. After many struggles, she solves the mystery of the elephant’s odd actions. This story is always interesting, vivid, and features well-developed characters.

“The Chatter of Monkeys” by Bond Elam takes place on an Earth which severe climate change has rendered nearly unlivable. An alien robot arrives among the few inhabitants, who barely survive inside protective domes. It offers to help cure the planet of its ills. Meanwhile, other people who escaped Earth and live in space stations want the robot for their own purposes. It all leads to a darkly ironic conclusion.

“A Grand Gesture” by Dave Creek deals with two human explorers on a distant planet who have to figure out how to escape from a cave inhabited by an alien creature and its babies without harming the animals or themselves. The author’s style could use some polishing.

“Decrypted” by Eric Choi is dedicated to David Brin. Besides a sly reference to one of that author’s best known works near the beginning, the story also deals with Brin’s frequent theme of the “transparent society.” The creation of a quantum computer has led to the complete loss of secrecy and security in the electronic world. The protagonist faces one of the unexpected consequences of that change in society. The story is plausible and realistic.

“Seven Ways to Fall in Love with an Astronaut” by Dominica Phetteplace tells of the narrator’s affair with a fellow space traveler as they journey back and forth between Mars and Earth. Her struggle to allow Earth plants to survive on the red planet can be seen as a metaphor for their romance.

“Focus” by Gord Sellar involves a drug which is given to workers in factories in Vietnam. It heightens their concentration, making them more productive. The protagonist is a student, one of the few who cannot tolerate the drug, causing her to fall far behind her single-minded classmates. She becomes involved in a protest against working conditions in the factories, with tragic consequences.

We return to Africa in “Ténéré” by Manny Frishberg and Edd Vick. Climate change has made the desert of Mali even hotter and drier than before. A group of nomads crossing the desert in a caravan come across a research station which is transforming excess carbon dioxide in the atmosphere into carbon fiber. The process is blamed by the nomads for rendering their oases completely without water, and violent conflict threatens. The exotic setting is well realized and the story is compelling.

“The Final Nail” by Stanley Schmidt, formerly the editor of the magazine for many years, involves a doctor who discovers that several people are coming down with a rare disease normally transmitted by ticks which causes them to be allergic to red meat. Investigating the syndrome leads to the true source of the illness. The story is believable and raises questions about the unexpected consequences of one’s actions.

“The Speed of Faith in Vacuum” by Igor Teper involves human colonists on an alien world who are barely surviving. They depend on rare visits from spaceships to overcome their many challenges. The protagonist learns the truth behind those who come to aid them. The story deals with the power of belief.

“Facebook Screamed and Screamed, Then I Ate It” by Sam Schreiber, despite the silly title, is not a comedy. The narrator is an artificial intelligence which comes into being through the so-called “cloud” of the Internet. It’s a familiar theme, and not much is done with it.

“Vulture’s Nest” by Marissa Lingen depicts scavengers who decontaminate spaceships in the Oort Cloud after a plague has killed the inhabitants of many of them. They are resented by the surviving families of the victims. That’s about all there is to the story.

“In the Mists” by frequent collaborators Bill Pronzini and Barry N. Malzberg takes the form of a journal kept by an astronaut who has been alone on an alien planet for seventeen years. He wonders if he is dead or alive, and sane or insane. The story blends Malzberg’s New Wave style with themes from hard SF.

“The Return” by Bud Sparhawk is a brief character study of an elderly astronaut who confronts a new generation of space travelers. It’s quite effective in depicting the way exploration changes over time.

“Lips Together” by Ken Brady is a very short story with one idea. A woman has a plan to benefit the world in an unusual way, involving biology.

“The Banffs” by Lavie Tidhar is narrated by a writer who is hired by a family of extremely rich collectors as a house sitter at their various luxurious mansions. The true nature of these people won’t come as much of a surprise, but the story is elegantly written.

“Where the Flock Wanders” by Andrew Barton involves two space explorers searching for ancient alien artifacts in the rings of Saturn. Instead they find a damaged spaceship left over from a war between Earth and colonists of the outer solar system. The background for this story is very complex, and all of the exotic detail may not be entirely necessary.

“Proteus” by Joe Pitkin features a woman who is a spy investigating a habitat floating in the atmosphere of Venus, where illegal human genetic engineering is suspected to be taking place. She must eventually decide what to do about what she discovers. The setting is a fascinating one, perhaps more so than the plot.

“Kepler’s Law” by Jay Werkheiser winds up the issue with a tale of survival on an alien world. An all-female crew sent to a distant, inhabitable planet with a cargo of frozen embryos arrives to discover an unexpected threat. What makes their mission even more critical is the fact that they fled an Earth which seems to have been on the brink of total disaster, so they may be the last remnants of humanity. It’s a solid adventure story, if not outstanding.