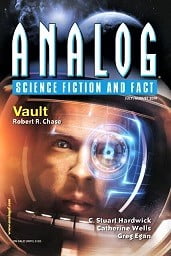 “The Quality of Mercy” by Catherine Wells
“Shooting Stars” by Tom Jolly
“A Life in Particle Archaeology” by John J. Vester
“Sailors of the Second Sun” by David L. Clements
“Labor-Saving Relations” by Buzz Dixon
“The Babbage Tour” by Leo Vladimirsky
“All Tomorrow’s Parties” by Phoebe North
“A Wonderful Thing to Say” by Dan Reade
“Portle” by Robert Scherrer
“Monarch of the Feast” by Paul Di Filippo
“What We Named the Needle” by Freya Marske
“Uncommon” by Leah Cypess
“Captain Zack & the Data Raiders” by Steve Rasnic Tem
“A Neighborhood for Someone Else” by Alison Wilgus
“Dreaming Up the Future” by Julie Novakova
“Finnegan, Bring the Pain” by Joe M. McDermott
“A Potential Application of Induced Resonance in a Four-Dimensional Crystal of Quantum Spacetime” by Eric James Stone
“The Eyes of Alton Arnhauser” by Nick Wolven
“The Slipway” by Greg Egan

The current issue of this venerable magazine of science fiction offers a number of tales set close to home, with others taking place in the farthest reaches of space. A generous offering of time travel stories allows readers to voyage to the past as well, and even into dimensions parallel to our own.

A routine astronomical mission in deep space leads to a crisis in “Vault” by Robert R. Chase. A starship travels to a remote part of the galaxy in order to investigate a star with peculiar properties. The crew discovers an ancient alien device, buried under a nearly impenetrable barrier. They have to decide whether to retrieve it, as a potential weapon against their enemies, or to let it remain hidden, as too dangerous to release. The ship’s artificial intelligence plays an unexpected role in their heated debate.

The author creates a complex background and a strong sense of suspense. A key point in the plot is the ambiguity of the AI’s degree of consciousness, presented in a manner that is not entirely convincing.

“The Quality of Mercy” by Catherine Wells also takes place on a distant world. A military veteran pilots a ship carrying an anthropologist to the planet. Her mission is to study the local inhabitants, and to determine if they are fully sentient. The two dislike each other, but learn to work together when danger looms.

A clash of personalities evolving into respect and cooperation is a familiar theme, even though the characters are richly developed. The setting may be too Earth-like to satisfy readers expecting something more exotic.

“Shooting Stars” by Tom Jolly is a high-tech detective story set on a faraway world. The hero and his loyal AI investigate a murder caused by a weapon that left a large hole in the alien victim, as well as the building where it lived. The solution to the mystery involves a conspiracy to conceal the truth, and places the detective in danger of his life.

This story will appeal to fans of crime fiction. Those who are familiar with a common theme found in many science fiction stories may figure out the nature of the weapon before the hero does.

“A Life in Particle Archaeology” by John J. Vester features insect-like beings inhabiting a higher dimension. Their experiments in subatomic physics have unfortunate consequences for the human race. The concept is imaginative, but several puns on the names of great scientists—Newtant for Newton, for example—render the story sophomoric.

“Sailors of the Second Sun” by David L. Clements takes place in the most distant regions of the solar system. A probe equipped with artificial intelligence investigates a newly discovered brown dwarf, or failed star, several times larger than Jupiter. Anomalous findings suggest the AI is failing. The real explanation will not come as a surprise to most readers of space fiction. The story is enjoyable, but offers little that is new.

“Labor-Saving Relations” by Buzz Dixon is a satiric tale about advanced household appliances that develop sentience. The problems caused by this lead to a resurgence in low-tech devices for housework. This is a minor piece, but one that anyone frustrated by modern technology will appreciate.

“The Babbage Tour” by Leo Vladimirsky is the first of several time travel stories in this issue. A woman who invents a way to send objects into the future is dying of cancer. Although all the living organisms that come back to the present die, she is determined to see tomorrow for herself. Although not entirely plausible, this story has strong emotional appeal.

Tourists visit the past in disguise in “All Tomorrow’s Parties” by Phoebe North. The narrator accompanies a woman to 1964, in order to witness the beginnings of an important rock band. Their voyage leads the narrator to an unexpected encounter with another time traveler, and the woman to a critical decision.

The author makes the inherently fantastic idea of time travel seem very real. The past comes to life in vivid detail. The plot deals with the important theme of the consequences of one’s actions, with characters with whom the reader can fully empathize.

A different way of experiencing the past appears in “A Wonderful Thing to Say” by Dan Reade. Technology allows one to view events that occurred in a certain location at a specific time. A widow witnesses one of her husband’s final actions, leading to an ironic revelation.

The author uses multiple flashbacks in a way that enhances the theme of the story. The premise and the characters are believable. The plot deals with the imperfections found in all human relationships, and has a powerful effect on the reader.

“Portle” by Robert Scherrer is an epistolary story, told largely through the diary of a child. It begins in a version of the Twentieth Century where a device found on the Moon, seemingly of alien origin, leads to instant teleportation. Unlike most people who use this technology, the child realizes that it actually transports people into parallel universes. Eventually she learns her true nature.

The author’s ability to write in the voice of a young girl is impressive. Some aspects of the plot, particularly the way in which contact with other versions of herself increases the child’s intelligence to superhuman levels, strain credibility, even in a story with an extraordinary premise.

We return to time travel in “Monarch of the Feast” by Paul Di Filippo. In the year 1857, a young Italian teacher and poet learns of a charismatic revolutionary with incredible powers. He joins his cause, eager to unite his homeland into a single nation. The reader soon learns that the leader is from the future. He intends to change history and make himself ruler of the world.

Written in an elegant style that suits its setting, the story draws one into the world of Nineteenth Century Italy in a compelling way. The plot is reminiscent of the Change War stories of Fritz Leiber, but is entirely original. The contrast between the language of the romantic poet and that of the cynical time travelers provides a welcome touch of wit.

The narrator of “What We Named the Needle” by Freya Marske is an artificial intelligence running a starship for its sole human occupant. It thinks of the woman as its mother. A girl in suspended animation arrives from the planet the ship orbits. Once revived, she works with the AI against the woman, whose growing senility threatens the existence of the ship.

The story is full of science fiction ideas, some of which are overly familiar. The outcome of the AI’s struggle with the woman is inevitable, but many will find it unpleasant.

In “Uncommon” by Leah Cypess, a woman diagnosed with cancer faces a terrible choice. If she accepts treatment for the malignancy, she will lose immunity from another disease. Almost everyone in this future world has the immunity. One of the few who does not talks with the woman, so she will understand the challenge she faces. The story depends on a twist ending that is predictable, and which makes the woman’s actions seem foolish.

The title characters in “Captain Zack & the Data Raiders” by Steve Rasnic Tem are an underground team of young computer experts who work to make sure that important information, erased from the Internet by the powerful, remains available to the public. What might have been an ordinary story about hackers becomes something more powerful when the activities of one of the data raiders leads to a tragedy. The author has an important point to make about the way in which either hiding information or releasing it into the wrong hands can be dangerous.

“A Neighborhood for Someone Else” by Alison Wilgus deals with a human woman on an alien planet. She has temporary permission to remain there, and seeks permanent residency, despite the enormous differences between human and alien cultures. The author creates intriguing, exotic aliens and a fine character study of the protagonist. The plot is simple; if intended as an allegory for modern immigration policies, the point is unclear.

“Dreaming Up the Future” by Julie Novakova features artificial intelligences designed to come up with new, untested scientific hypotheses. The idea is an interesting and plausible one, but there is little else to the story.

The narrator of “Finnegan, Bring the Pain” by Joe M. McDermott is a teenager who faces a future of low-level employment. His closest friend is a girl who is about to leave Earth for the Moon, and then on a starship heading for Alpha Centauri. The boy throws one last party to say goodbye. The story is a moving tale of social class and loss, but its science fiction trappings are not necessary for the plot.

“A Potential Application of Induced Resonance in a Four-Dimensional Crystal of Quantum Spacetime” by Eric James Stone is a very short story with a very long title. The narrator contemplates an experiment that might undo a tragedy, or might lead to a greater one. This brief offering is an effective mood piece.

The title character in “The Eyes of Alton Arnhauser” by Nick Wolven steals experimental contact lenses from a research facility. They allow him to obtain information about every person he sees. At first, he intends to use them to seduce women. Eventually, he sees much more than he wants to see, leading to a final vision that is more than he can bear.

This science fiction horror story reminds me, in a way, of the old movie X: The Man with the X-Ray Eyes. In both cases, enhanced vision leads the protagonist to a terrifying fate. The author writes vividly, and the final scene is gripping. Some readers may find it hard to care about the unpleasant main character.

“The Slipway” by Greg Egan begins with the mysterious appearance of a large number of objects in the night sky. They seem to be new stars, arriving from nowhere. Scientists around the world study the bizarre phenomenon, coming up with competing explanations. The truth is astonishing, with extraordinary implications for the future of humanity.

Full appreciation of the premise requires familiarity with many concepts of modern astrophysics. The concept creates a true sense of wonder, describing an amazing event with rigid scientific logic. The characters in the story are little more than a way for the author to present a fascinating idea in the form of fiction.

Victoria Silverwolf got some free pizza and donuts tonight.