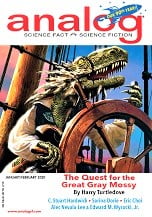 “The Quest for the Great Gray Mossy” by Harry Turtledove

“Wheel of Echoes” by Sean McMullen
“Hive” by Jay Werkheiser
“The Greatest Day” by Eric Choi
“Bulkheads Make the Best Neighbors” by Ian Randal Strock
“Welcome to the New You: Terms and Conditions for the Icrispr Gene-Editing Kit” by Douglas F. Dluzen
“The Grass Bows Down, the Pilgrims Walk Lightly” by Izzy Wasserstein
“All the Turns of the Earth” by Matthew Claxton
“One Lost Space Suit Way” by A. J. Ward
“Around a World in Ninety-Six Hours” by Wendy Nikel
“Birds of a Feather” by Gregor Hartmann
“Guns Don’t Kill” by Richard A. Lovett
“Q-Ship Militant” by Joel Richards
“The Shocking Truth About the Scientific Method that Privatized Schools Don’t Want You to Know” by Sarina Dorie
“Hubble Rising” by C. Stuart Hardwick

The January/February 2020 issue of Analog has fifteen original stories with one flash and three novelettes.

“The Quest for the Great Gray Mossy” by Harry Turtledove

The Queepahd sets off to hunt the Great Gray Mossy in this SF novelette set in an alternative universe where the dinosaurs survived to be the dominant sentient species. The reptilian captain of the ship is determined to avenge himself against the gray mossy that had bitten off his tail.

Milvil is new to the mossy hunt, but even he can see the captain’s obsession is akin to madness as he relentlessly searches for his nemesis. Still, a captain at sea is a god, and none can divert him from his intended course.

In the Great Southern Sea, the captain hears of a gray mossy sighting and sets off to end his own torment that the monster got the better of him once before.

If the plot invoked memories of Melville’s classic The Whale (aka Moby Dick), it wasn’t a coincidence. And the story’s twists and turns were mostly known after reading the first page.

“Wheel of Echoes” by Sean McMullen

Kirsty is giving her opinion on Shakespeare in this SF short. Invited by a recording company to comment on some recordings, the eighteen-year-old finds herself head to head with a renowned expert. But one of the recordings is scratchy and while the expert thinks it’s a New England accent, Kirsty thinks it comes from a man of intelligence.

When the recording company reveals its true origins, Kirsty is in awe and the expert unbelieving. Could this recording destroy all the contemporary teachings on Shakespeare and his plays?

The author had a new idea, pushing the first recordings back four hundred years, but the rest of the plot was predictable, with the characters playing cliché-like roles.

Set on an alien world, this SF short describes the first contact between humans and the local hive community. The hive leaders struggle to understand these creatures that appeared inside their territory and don’t communicate through phenomes. The humans see annoying indigenous bugs, albeit they are large and menacing.

As the two sides watch and wonder, another hive decides to attack the first hive, while it’s distracted by the visitors. As the two hives trap the humans between them, the visitors feel they are coming under attack; how will they react?

Though the story read a little slow, it gave an interesting vision of an alien culture and posed the question of how can we measure intelligence unless we are prepared to break away from our own paradigms.

“The Greatest Day” by Eric Choi

The Columbia shuttle suffers damage during its launch in this alternative history SF short. Dale’s launch team has spotted foam falling from the booster and damaging the tiles on the shuttle’s left wing.

At first, Dale fights against a nonchalant ‘It’ll be fine’ attitude, until it becomes clear that the shuttle will not survive re-entry. Now, they must organize a rescue mission, and turn a disaster into another ‘Greatest Day’ like Apollo 13. But the best laid plans can often go astray.

This was an interesting look back at one of the darkest days of the space shuttle program in 2003. An entertaining read.

Two cultures are at odds with each other in this flash SF set in the future. One culture has adapted to living in orbit, while the ground-based culture keeps all the power. Still, the orbiters have an idea on how to win some freedom and respect from the groundhogs.

An interesting snippet of a story, with a nice sprinkling of mystery.

“Welcome to the New You: Terms and Conditions for the Icrispr Gene-Editing Kit” by Douglas F. Dluzen

The gene-editing kit comes with advice and warnings in this short SF. It lets the user know what DNA changes the government currently allows, like eye color, or extra fingers. But it also comes with many warnings, just like any medication.

This was a story morsel that promised a future of self-modification. The prose was easy to read and entertaining and worked well given the story had no characters.

“The Grass Bows Down, the Pilgrims Walk Lightly” by Izzy Wasserstein

In this SF short, Erika is a member of the human delegation sent to meet the highly intelligent Klevish aliens, to learn new sciences from them. The Klevish select her to negotiate for their knowledge of reclaiming lost genetics. All she has to do is solve the riddle of why the grass bows before the Klevish during their pilgrimage to the sea.

As she uses all her biology knowledge to test different hypothesis, Erika also reflects on her past and the day her lover chose to leave her and become a distant colonist. Those memories help her realize that she would have to break away from her known paradigms if she was to have a successful negotiation with these unusual and gentle Klevish people.

Filled with original ideas, this was one of those character-centric stories that leave you sad at the end. Not because it wasn’t engaging, because it was very engaging, but the disappointment comes from the realization there is no more to read.

“All the Turns of the Earth” by Matthew Claxton

The young boy finds himself mysteriously transported back to the cretaceous period in this short SF. At first, he barely survives, but in time he adapts and even imprints a newly hatched pterosaur as its parent.

Over more years he becomes the pterosaur’s rider, flying about the prehistoric world. But time has more twists and turns for him and his ‘dragon’.

This charming short story was a pleasure to read as the author developed the two characters and didn’t confuse the story with how it all happened.

As the colonists continuously improve the alien atmosphere, the AI space suit finds itself unemployed on a farm in this charming SF short. Facing the risk of the farmer selling it to the scrap yard, the space suit runs away.

For over a hundred Earth-years the space suit goes on an odyssey across the planet, helping whatever and wherever it can, and watching the colonists as they continue to terra-form the planet. As the space suit’s parts begin to malfunction, it seeks out a new purpose for its continued existence.

The author managed to imbue the space suit with feelings in this unusual story, making it difficult to put down until the end.

“Around a World in Ninety-Six Hours” by Wendy Nikel

In this SF short, Polly drifts in the violent winds above Venus, charting the barren landscape. Meanwhile her brother, Casper, is exploring Mars many millions of miles away. Still, the siblings talk every day, their fierce rivalry bringing them close to each other.

When Casper says he’s planning a high-speed circumnavigation of Mars, they challenge each other to a race. Who can circumscribe their planet the fastest? In such hostile environments, things soon go wrong for one of them.

The story’s prose was easy to follow, and the mysteries pulled the reader through to the end.

“Birds of a Feather” by Gregor Hartmann

An astrophysicist, Frank, can’t get his new radio telescope launched in this short SF. His new and efficient approach to concentrating radio signals would overshadow a high-cost and highly publicized traditional telescope and so the authorities refuse to launch it.

But Frank’s adventure-seeking twin brother sees opportunities here. With a wide following on the net, he and his fellow adventurers seek out alternative uses for the new technology.

With several plot twists and a good pace throughout, this an interesting read.

When a hunter tries to shoot an out-of-season buck, his gun won’t fire in this SF short. The modern guns have chips programmed to help the shooter’s accuracy and he can’t understand why it failed him. Another rogue hunter finds his gun inoperative when he tries to kill a game warden who is investigating some poaching.

Why is a hunter’s best friend letting them down?

This plot had no obvious protagonist, but the mystery made an engaging and thought provoking tale.

In this short SF story, Militant is an AI cargo ship that re-equips itself to combat the slavers who roam space to seize any AI cargo ships and convert them to manual cargo ships. Militant has some humans on board to help too.

As Militant plays the part of a slow cargo ship, a slaver begins moving in to capture it. Just behind the slaver are two captured AI cargo ships, stripped of their AI brains. Will Militant face the same fate?

At times confusing and slow, this story lacked any punch to keep it engaging.

Imani teaches high-school science in this near-future SF novelette. The curriculum is set by the corporations that sponsor the school, where each class only exists if there is a donor to fund it.

Imani struggles against the doctrines forced on her by the donors; no Darwin, or lab experiments, everything must be politically correct or reflect the views of the donor. Finally, she decides to risk teaching small labs during her lunch break or after school to students wanting to learn real science. But she continues to find herself blocked or threatened with termination at every step. How can she do what she loves most, and teach science to open minds?

The story provided a view of where politically correct education could take humanity. The prose was light and easy to read and enjoy.

“Hubble Rising” is an SF novelette about Kylie, the mission commander for a salvage crew attempting to save the one-hundred-year-old Hubble Telescope. The satellite is gyrating wildly from a failed attempt to boost it into a salvage orbit, making it difficult to dock with for retrieval.

The crew develops a plan for slowing Hubble and docking with it while Kylie watches from the command module. But after a successful connection, things go wrong in Kylie’s command module sending her into a different orbit with no way to get back to Hubble to rescue the retrieval team.

This story had a steady pace and was an interesting story.

This issue had several compelling tales in it, with most of the rest being good stories.