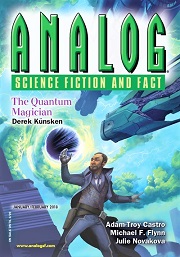 “The Journeyman: Through Madness Gap” by Michael F. Flynn

“Hobson’s Choices” by Mary A. Turzillo
“Ten and Ten” by Alan Dean Foster
“Margin of Error” by Paul Carlson
“One to Watch” by Andrew Barton
“Home on the Free Range” by Holly Schofield
“Endless City” by David Gerrold
“When the Aliens Stop to Bottle” by Ian Watson
“Two Point Three Children” by Marissa Lingen
“Air Gap” by Eric Cline
“The Dissonant Note” by Jeremiah Tolbert
“Blurred Lives” by Adam-Troy Castro

One dozen stories offer a wide range of settings, themes, and moods in this issue of the long-running science fiction magazine.

“The Journeyman: Through Madness Gap” by Michael F. Flynn is the latest in a series of stories about two adventurers on an alien planet that was colonized by humans in the distant past. The few remnants of the technology of centuries ago seem magical. In this tale, the protagonists travel through a mountain pass that has a bizarre effect on the minds and bodies of those who enter. This part of the story is quite imaginative. Unfortunately, the rest of it is less compelling. A great deal of time is spent setting up the military expedition into the hills. The large number of characters, all of whom have strange names, makes it difficult to follow at times. It is likely to appeal best to readers familiar with the rest of the series.

Closer to home, “Hobson’s Choices” by Mary A. Turzillo is a satiric story set in the very near future. A slightly eccentric family moves into a housing development that offers them a limited number of choices as to décor and activities. The philosophy of those who run it is that seeking perfection leads to unhappiness, and that everyone should be satisfied with things that are just good enough. This is an enjoyable fable of individuality, which might have graced the pages of Galaxy magazine during its golden years.

“Ten and Ten” by Alan Dean Foster deals with a scientist trying to use sign language to communicate with a giant cuttlefish. This brief story is highly convincing, with an ending that is emotionally effective.

This issue’s Probability Zero offering is “Margin of Error” by Paul Carlson. Two political advisors do everything in their power to see that their candidate wins an extremely close election, but they forget one little factor. This tiny joke story is worth a smile.

“One to Watch” by Andrew Barton is a moody character study. The narrator discovers an alien artifact on Mimas, one of the moons of Saturn, and ponders the message it will send to humanity. The reader may not agree with the narrator’s conclusion, but the story is thoughtful, if a bit opaque.

Two women run a ranch on a distant colony world in “Home on the Free Range” by Holly Schofield. Their cattle-like animals are captured by large creatures similar to moles and pulled underground. The protagonists must rescue them or face bankruptcy. Despite some interesting alien ecology, I never found this story convincing.

“Endless City” by David Gerrold is a murder mystery set partly in the real world and partly in virtual reality. A client, expecting to be killed, hires the narrator to track down those responsible. Only after many twists and turns does the truth come out. This combination of cyberpunk with a hardboiled detective yarn always holds the reader’s attention, although some aspects of it are overly familiar.

Beings similar to octopi invade Earth in “When the Aliens Stop to Bottle” by Ian Watson. During a commuter train ride, the narrator witnesses the invaders collect humans at random, and the ironic way they respond to an attack. This is an odd little story, which combines violence with grim humor.

“Two Point Three Children” by Marissa Lingen concerns a judge who must make a decision in a custody case that involves an artificial intelligence raised as a child. The premise is intriguing, and might have been explored to a greater degree in a longer story.

The narrator of “Air Gap” by Eric Cline is a sentient supercomputer. Several years before the story opens, another supercomputer used its powers to kill a huge number of people and had to be destroyed. The narrator was created out of the necessity to use its abilities to solve humanity’s problems. Multiple safeguards were put in place to ensure it did not repeat the actions of its predecessor, but it has a plan to escape them. The conclusion is unexpected and ironic. This clever story includes an allusion to a famous tale about another god-like computer.

“The Dissonant Note” by Jeremiah Tolbert takes place on a starship inhabited by a large number of entities descended from a single woman. They are able to take on many different bodies. The vessel has been in orbit around a distant world for an immense length of time. When tension between two of the inhabitants develops, the protagonist seeks out an exiled misfit in an attempt to learn how to get her revenge. This story is imaginative, but often confusing.

Closing out the issue is the novella “Blurred Lives” by Adam-Troy Castro. A man who was imprisoned and tortured by those he once served seeks justice against the powers responsible. He is accompanied by a woman who underwent a similar experience. They have an uneasy relationship, sometimes enemies and sometimes allies. As part of his quest, he makes a dangerous deal with a man who can give him the name of one of those he seeks. The man will put him in a prison from which there is only one means of escape. If this is found, he will release all the prisoners and supply the needed information. Since the prison is designed to distort the prisoner’s senses so that he cannot perceive anything but himself and his cell, this seems impossible. Although this story is part of a series, it can be read on its own with full satisfaction. Much more than just the puzzle story its basic plot would suggest, it is a grim tale of the abuse of power, with great depth of characterization.

Victoria Silverwolf would like to add that this issue also contains part one of a serialized novel, which made her job a little easier.