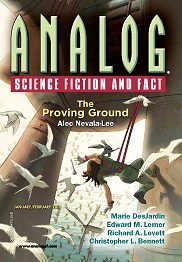 “The Proving Ground” by Alec Nevala-Lee

I must state at the outset that this issue is the most mediocre issue of any SF magazine I have read in many years. None are terribly written but all of them are mediocre. I will quickly write about each one but I don’t suggest you buy this issue.

One of the best of the bunch is first. Beginning appropriately with a quote from Daphne DuMaurier, “The Proving Ground” by Alec Nevala-Lee is a well told tale of the near future. Set in the Marshall Islands it reflects the desire of society and corporations to rebuild during the drowning of the world by global warming. Add in a lot of ideas from Du Maurier’s “The Birds” and you have this story of the near future.

“Twilight’s Captives” by Christopher L. Bennett is about a conclave of three alien species on a human colony world discussing philosophy and the need for change in various philosophies to work together on one world. Again a nice filler piece but nothing memorable.

The story of trouble in outer space and the need to divert the McPherson Skylab into the sun so that it will not destroy the Manly Space Telescope in Andrew Barton’s “Orbit of Fire, Orbit of Ice” is devoid of character and too much like many other stories of something going wrong in space.

A nicely told story is “Long Haul” by Marie DesJardin. It involves a beloved alien pet and some xenophobic dock workers. It is not new but it is short and to the point.

The USA against the Russians and the Chinese to find a naturally occurring super conducting material in the Canadian north goes just about as predicted in “Catching Zeus” by Tom Jolly.

Marissa Lingen writes an interesting piece for this issue. In “Drifting Like Leaves, Falling Like Acorns” she discusses a whole world containing Gliders (modified small gliding humans), soldiers of some kind defending the frontier who calm themselves with psychotropic frogs. It unfortunately fails as a short story because while much of interest is set before us, nothing is really done with it.

Another interesting bit of a story by Antha Ann Adkins is “Dall’s Last Message.” Unfortunately the alien situation is looked at too quickly. It involves seasaucers and the waterwraiths that devour them and leaving messages in a memory core of some kind. Again too short and not enough world-building to make it work, but a good start on something longer.

The end of the Mayan civilization is told by “The Last Mayan Aristocrat” by Guy Stewart. After being all but destroyed by the alien conquistadors the Mayans meet up with a true alien entity and find a way to memorialize their culture into the future.

“The Shallowest Waves” is the second worthy story in the issue. It is by Thoraiya Dyer & Alvaro Zinos-Amaro. It follows two story lines. One is set in a future Norway where Charlotte has come up with a way to terraform Europa, but as a furniture designer she is not taken very seriously. The second thread is from Jurek’s point of view, a worker selecting samples of bacterial life on Europa. Both stories are competently interwoven and come to a good finale.

A colony world that rules its people through illusions of god-like powers is brought into negotiations with the consortium of worlds. Will illusion win out in “Necessary Illusions” by Tom Greene or will reality take its place?

Paradise is a colony world where all Earth mammals have been engineered to not harm the ecology in Edward M. Lerner’s “Paradise Regained.” This causes some problems for future humans and one man is left to decide if the cure should be released or withheld from the world.

“Briz” is another too-short story failing to give enough of a handle on an alien’s situation and his world. I hope Jay Werkheiser writes more of the story because with more information and character this could be very interesting.

The question of a downloaded human being a “real” entity or just a computer program is the story in “Split Signal” by Joel Richards. This story has nothing new to say about this old theme.

A slightly different story by Scott Edelman with “After the Harvest, Before the Fall” is next. He uses biblical imagery to talk about a world where some humans are imprisoned to live and work while others eventually harvest their bodies. A rebellion starts up inside the prison with Ezra going against his former tutor and friend Daniel. Not all that new but it at least is a thoughtful story.

A time travel/manifold worlds’ story is the newest Bill Johnson offering. It takes place before Carthage is destroyed by Rome in a world where Carthage was not destroyed. “Whending My Way Back Home” feels like a series story with just too much backstory to make it enjoyable to one who has not read the series. Interesting but not complete.