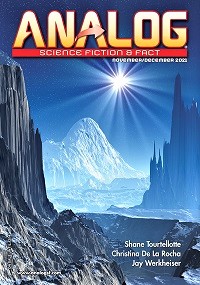 “The Malady” by Shane Tourtellotte

“A Sports Story” by Brenda Kalt

“From the Maintenance Reports of Perseverance Colony, Year 12” by Jo Miles

“An Hour to Ames” by Dan Reade

“No Stranger to Native Shores” by Matt McHugh

“The Transparent World” by Robert Reed

“The Library at Ecbatana” by Timons Esaias

“The Kindness of Jaguars” by Monica Joyce Evans

“The Water Beneath Our Feet” by Alice Towey

“ Wander On” by William Paul Jones

This issue of Analog contains the second, concluding part of Jay Werkheiser’s serial (not reviewed), two novelettes, ten short stories and three pieces of flash fiction. As with most issues of Analog there is some strong content and some weaker content, but doubtless there will be something here for most readers.

“The Malady” by Shane Tourtellotte is a novelette in which the premise is perhaps rather better than the execution. An alien race has been rendered less intelligent and healthy by a mystery illness—the ‘malady’—that has affected them for millennia. The story starts with two of the aliens conducting experiments in a search for a cure to the disease, in hopes of reinstating the race’s intellect. The story subsequently skips forward in ten-year jumps to show how the scientist’s offspring (and the race in general) use the improved intellect that comes from the cure, over the course of the next fifty years. The story explores several interesting themes, such as how intelligence is irrelevant to the avoidance of conflict, and the wisdom, or not, of developing technology that’s within reach. However, the story is not without its faults. On a simplistic front, the alien names are unnecessarily long and hard to remember, which led to this reader having to double back to confirm who the characters were in each scene. Perhaps more importantly, the structure of skipping 10 years ahead with each section led to changes in the principal characters. The father in the first section is quite well rendered, but he moves to the background fairly quickly, and the story is less engaging when we start to follow his children, with whom we have less connection and empathy. While the tale picks up quite well in the last few pages, the long middle section is therefore rather dull. A tighter, shorter story exploring the same themes might have been more successful.

“A Sports Story” by Brenda Kalt

This is the second story by Kalt to be published in Analog this year that features tentacular aliens, suggesting it’s a favoured theme, and it’s one the author carries off well. Aliens, with an appearance not unlike trunkless elephants with tentacles, have recently ended a war with the human race. One ex-prisoner of war returns to his home world and looks to get back in physical shape by training at his favoured sport, ‘snrlgar’. In his younger days he was a champion ‘charger’ at snrlgar; could he get his professional status as a player back? The aliens and plotting feel like a throwback to the fun SF of the pulp years and the alien details, such as the sport itself, are well thought out. There is little hidden meaning or metaphor here, and one might argue that the same story could have been written about a human wrestler coming home from a war on Earth, but as an immersive, well-written story that entertains, it is certainly successful.

“From the Maintenance Reports of Perseverance Colony, Year 12” by Jo Miles is a super little SF tale. A servitor robot notices mistakes being made by the colony AI and decides to investigate. The author uses the SF setting to address the problems inherent in focussing on immediate gratification and short-term rewards and does so in a satisfying story. The prose is good and, while many stories take too long to present their ideas and tell their story, this is just the right length, and leaves the reader wanting to read more about the same colony to see how they get on. Recommended.

“An Hour to Ames” by Dan Reade is a superior short story and is highly recommended. Rachel’s mother is dying of cancer in a hospice, but the dying woman was an awful drunk, constantly belittling and criticising her daughter. So, rather than visit in person, Rachel sends her android robot, who closely resembles her, to visit the hospice in her place. Characterisation is well developed in a few short pages, and the dialogue beautifully captures the relationships between the daughter, her aunt and her mother. Engrossing and immersive, the story rings true, offers genuine novelty in the plotting, and the twist at the end is well done.

“Never to Happen Again” by Bill Pronzini & Barry N. Malzberg is a short story that relates the closure of a post-nuclear apocalypse museum of epoch antiquities. The set up suggests it may have something interesting to say about the current ‘cancel culture’, but instead it ultimately ends with a well-worn SF trope as the plot twist.

“Ars Brevis Est” by Anatoly Belilovsky is flash fiction. A ‘robbot’ gives instructions to an ‘artdroid’ in orbit above a future Earth. Like most flash fiction it doesn’t have time to engage the reader or convey much of meaning, and in this case is further let down by errors in the use of English.

The novelette “No Stranger to Native Shores” by Matt McHugh is very readable and entertaining, though not perhaps the most original of stories. This would fall into the ‘first contact’ subgenre, except that strictly speaking it’s a second-contact story. Seven years ago, a human interstellar scout ship crashed on an alien world, leaving a little girl as the only survivor. Now, a second human ship finds the world and site of the original crash, seeking answers about the doomed ship and contact with the native lifeform. The set-up and story development are good, and the interactions between the characters and races are well-handled. There have been so many first contact short stories it’s difficult to bring much originality to the theme, though there’s probably enough here to hold most readers interest. The end is relatively soft, however, and doesn’t quite deliver on the promise of the strong start.

The most obvious way to start a review of “The Transparent World” by Robert Reed is to note that it’s not actually a story, given there are no plot, characters or story arc. Whether this is a problem will depend entirely on whether you like what you get instead: a polemic against the lack of privacy stemming from the use of social media, told from a near future standpoint. Reed forecasts that worse is to come, I guess, which is doubtless true.

“The Library at Ecbatana” by Timons Esaias is short even by flash fiction standards. It doesn’t offer much to the reader but is a very quick read.

“Constellating the Darkness” by Howard V. Hendrix is another piece of flash fiction, but it’s longer and a good deal better than the preceding story. Written before the Covid-19 pandemic, it centres on two scientists at the high-altitude Atacama array telescope during a prion pandemic that is destroying the minds of the human race. It’s rather a grim little tale.

“The Kindness of Jaguars” by Monica Joyce Evans is an interesting story set in a future where meat is scarce. The protagonist runs a meat-substitute company, producing exotic meats such as jaguar from plant products, but she finds her company in trouble when her company is accused of a case of animal cruelty. The theme is intriguing, as humanity is likely to become more vegetarian, and it reads well. Perhaps the most impressive aspect to the story is that it is so moderate in its stance and not at all evangelistic—either in its underlying message or in the story’s conclusion—which is not always the case with this sort of theme.

“The Water Beneath Our Feet” by Alice Towey is an enjoyable tale. A cybernetic ‘farmborg’ who tends to the weeding, planting and pollinating of orchard trees, is sent by the farm’s owner to investigate why one orchard is so dry. The subsequent discovery by the cyborg of other humans outside the farm, and the existence they have carved out for themselves leads it to question its programming and the inherent rights of humans. Essentially rather a ‘hippie’ tale of the future, the underlying message isn’t overly thought-provoking, though it does make for an entertaining story; the imagery of the expansive fruit farm is well-captured, and the prose is light and engaging.

“Wander On” by William Paul Jones is set in the future in the asteroid belt, amid a community of asteroid miners. The tale combines several themes that have been explored in many past stories, so novelty of ideas is not the strongest suit of this story. Moreover, the motivation and actions of the miner who goes ‘off the rails’ is not entirely convincing, though it does bring quite an emotional charge to the piece. It’s therefore not without merit, as the author handles the tension toward the end of the tale really rather well, but one can’t help thinking the story is effectively a melange of other stories one’s read that are set out in the asteroid belt and involve crises of collision and survival.

“Caoimhe’s Water Music” by Mjke Wood is a sobering short tale of climate catastrophe. An Australian ocean-current scientist attends a conference in Wales, where a talk from an expert on tidal changes presages dire consequences of climate change. Exactly how true the warnings are, is unclear, but the kind of sudden change that’s described is certainly not that far-fetched. The fact that such effects may be on the horizon is of course worrying, but that makes the story timely; SF should reflect and extend our thinking on global concerns, after all. As a tale, it’s also well-structured and cleanly written, and so is recommended reading.

“Moon Unit” by Bill Frank treads very familiar SF ground, recounting an accident and survival tale on Enceladus, the frozen, icy moon orbiting Saturn. Moons such as Enceladus in the outer solar system offer extreme conditions in which to place ‘hard’ SF stories, and they have consequently been used an awful lot to tell this kind of tale. Unfortunately, this particular story is not an especially strong example. It doesn’t seem credible that better safety tolerances wouldn’t have been engineered into the space suits, and the physics are not really convincing either. Gravity is so weak on Enceladus that a short hop would propel you meters in the air for many seconds, such that contact with ground ice could be easily restricted and therefore be unlikely to lead to very rapid death in a well-insulated suit. So, as ‘hard’ SF it is unconvincing, and as a tale, it rather lacks originality.