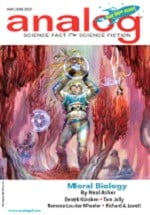 “The House of Styx, Part II” by Derek Künsken (novel, not reviewed)

“A Breath of Air” by Tom Jolly

“Calm Face of the Storm” by Ramona Louise Wheeler

“To Persist, However Changed” by Aimee Ogden

“A Compass in the Dark” by Phoebe Barton

“It was a Tradition when you Turned 16” by Eric Cline

Perrault is a translator charged with making first contact with a newly discovered alien lifeform in this SF novella. As part of a biotech enhanced exploration team, Perrault has significant improvements that allow him to communicate on all levels, including pheromones.

The expedition’s leader is an AI, Mobius Clean, that directs the military security team charged with protecting the non-military specialists like Perrault. But Clean is interested only in understanding the massive alien creature living on the planet, and if that takes some human sacrifice, then that is just a part of the arithmetic of success or failure.

As the group closes in on the alien life’s location, Perrault breaks through to understand its pheromone language. And the creature sends him a dire warning to stay away or else face the consequences, which are beyond its control.

With a pace akin to a novel’s, the author brought the reader to a truly alien place and introduced many intriguing ideas in a plot filled with mystery. A story not to be missed.

“A Breath of Air” by Tom Jolly

Banner struggles to get his Martian farm going in this SF novelette. He and his partners face a two-year deadline to be productive or return to Earth. However, having neighbors intent on putting them out of business, or killing them, isn’t conducive to success.

Accusations go back and forth on who’s to blame for some ‘accidents’, until something goes terribly wrong and both warring parties find themselves facing imminent death.

The plot was interesting, but the prose bogged down in the first half as the author set the stage and described the Martian ecosystem at length.

“Calm Face of the Storm” by Ramona Louise Wheeler

Set on a planet orbiting twin suns, this SF novelette describes the meeting of two different cultures. Bret is a flying man from the swamps who becomes lost and storm ravaged near the coastal mountains. A lighthouse in the mountains saves him. And he finds it peopled by strange translucent fliers.

He meets and falls in love with Mornell, whose family services the lighthouse. The elders of each culture look down on the other, but Bret and Mornell don’t care, not while the two suns shine together and there are long dark nights.

But in time the planet’s orbit takes it between the suns, and there is no longer a night in need of a lighthouse. Mornell’s people go into hibernation, leaving Bret alone in a strange land. Can he survive until the dark nights return?

The author created a unique world on which to set her story. The plot was engaging and easy to read.

The mission to Mars arrives with only one survivor in this SF short. Susana was asymptomatic of the new Candida fungal pathogen, but the rest of the crew died.

Now, alone on the red planet she prepares to bury her crewmates and initiate the terraforming protocols. But her habitat’s monkey-like robots are having control issues. And then one of them claims to have discovered Martian bacteria at a site marked as a prime candidate for finding life.

This was a quick look at the types of challenges humans will face as they try to establish themselves as a two-planet lifeform.

“To Persist, However Changed” by Aimee Ogden

The Moonmind watches the planet below in this unusual flash SF story. It’s waiting for the right day to transfer itself to the planet, the right moment to return home.

A bizarre snippet of a story from an imaginative mind.

The TV overhears a fight in this SF flash story. Alerted, the police don’t believe the boyfriend when he shows them it misunderstood some noisy accidents. And they cart him off to jail. From there it’s a downward spiral for the innocent boyfriend, victimized by a TV.

This was a story morsel that read easily, and who hasn’t wondered what those smart devices could misinterpret.

“A Compass in the Dark” by Phoebe Barton

In this SF short, a father’s obsession with maintaining a compass tower to guide dead spirits, plagues his disinterested daughter. Set on the moon, the daughter engineer tries to lead her own life, working on Luna’s farside, but her father keeps wanting her to help him maintain the compass that she doesn’t believe in.

The prose read well, though the plot didn’t hold much to keep the reader engaged.

“It was a Tradition when you Turned 16” by Eric Cline

The father prepares for a tradition handed down for generations in this SF short. Ray will teach his sixteen-year-old daughter, Melody, how to drive a car. But the autonomous cars don’t need a driver, and Melody sees no value in learning something she’ll never use.

Reluctantly she agrees. And after a close call or two in a deserted Mall parking lot, Ray tries to instill some discipline over distractions. But Melody won’t have anything to do with these archaic traditions.

This charming short story was a pleasure to read as both characters learned some important lessons.

This issue had some long and wonderful tales in it, with most of the rest being good stories.