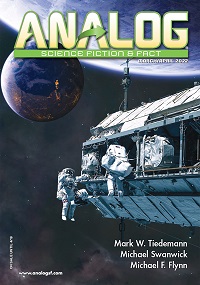 “Nirvana or Bust” by Michael Swanwick

“What We’ve Done” by Marie Vibbert

“Math of the Spear-Carrier” by Mike Duncan

“The Honeymooners” by Brenda Kalt

“Amyloids for Algernon” by Corie Ralston

“Stage of Mind” by Alvaro Zinos-Amaro

“The Journeyman: At the Bluffs of Sinjin Trell” by Michael F. Flynn

Bimonthly issues of Analog these days are hefty affairs, with this issue containing a novella, 3 novelettes, 11 short stories and 2 pieces of flash fiction. Notably, it also contains numerous stories of high quality making it a particularly strong issue of Analog.

The novella “Exile’s Grace” by Mark W. Tiedemann kicks off the issue in sterling form, offering a superior hard SF story set on a distant alien world. A crewman, stuck on an orbiting space-station while his ship gets necessary maintenance, discovers quite by chance that an old friend is living on the planet below, in an exiled or hermit-like manner. When he goes down to the planet to investigate, he discovers his old friend has had a sort of epiphany through interaction with a peculiar structure on the planet. From here the story unfolds satisfyingly, drawing the reader in to the author’s vision. The novella’s strengths here are the depth and sincerity given to the storytelling and the thoughtful dialogue between the main characters that explore various metaphysical themes. This novella reminded me more of Frank Herbert’s work than any other new short fiction I’ve recently read. Highly recommended.

“The Four Spider-Societies of Proxima Centauri 33G” by Mercurio D. Rivera is a humorous short story, told from the perspective of a rather cavalier trade diplomat who is trying to strike up relationships with the creatures of the story’s title. There are one or two really funny moments, which raise this up. It’s brightly told, and quite engaging, though the author seemed to have a better idea of how to start and progress the tale than to conclude it, perhaps, as it rather peters out at the end.

“Nirvana or Bust” by Michael Swanwick has a few interesting ideas, not least of which is the ‘intraface’ between a researcher and her artificially intelligent exoskeleton. Tensions between AI and human users have been explored a good deal in SF, so this is not a very novel theme, but the story is fairly well told and has some nice imagery. And yet, there’s something about the story that doesn’t entirely appeal, which may relate to the unsympathetic characters, or the ultra-causal lesbian sex, which adds nothing to the story and seems thrown in for effect. It is also unfortunate that there is a significant block of editorial text copied into the actual story toward the end (clearly not the writer’s fault), which may well trip up and confuse readers, until they work out what the error is.

“What We’ve Done” by Marie Vibbert is flash fiction, which is a challenging format and one that commonly disappoints. However, Vibbert proves again that she’s a superior SF writer, as this short piece manages to convey a clear idea—the unwitting integration of an AI into a young woman’s consciousness—as well as deliver a thoughtful consideration of the dangers of technology.

“Math of the Spear-Carrier” by Mike Duncan is very much a ‘hard’ SF story. A lone survivor is marooned among the debris of various stricken vessels following an attack on her ship in deep space and must use her superior mathematical abilities to calculate her jumps between ships and obstacles. The author adds some depth to the tale by providing a relatively engaging back-story for the survivor. That said, this is perhaps not the most original tale here and suffers a little by comparison from being in an issue containing several high-quality stories.

“The Hard Law” by D.G.P. Rector warns of the dangers of cult-following and entrenched thinking. On an inhospitable planet, used predominantly for mining, a band of four commune members engage a gun-for-hire to help them get an erstwhile commune member back into the fold. The scenes on the planet are quite nicely rendered, making the poisonous atmosphere and broken land easy to imagine. The main strength of the piece is it’s ability to evoke a strong emotional response from the reader. One’s sympathies for the characters changes considerably as the story progresses, which makes for an interesting read.

“In Transit” by J. T. Sharrah is quite a lengthy novelette, but like much of Sharrah’s output, it’s certainly worth the reader’s time. This is a ‘generation-ship’ story, of which there have been many over the years, of course. Given it’s a well-worked scenario, it takes skill to engage the reader and bring some fresh ideas and interest to the topic. The author has done just this, introducing the idea of split communities within the great ship, each with different outlooks. The harkening back to the Roman and Greek cultures, the references to T. S. Eliot, the solid characterisation and Sharrah’s frequent clever turns of phrase, all make this one of the better stories in recent issues of Analog.

“The Honeymooners” by Brenda Kalt is another well-told story from an author who can usually be relied on to provide a good read. One of the world’s wealthiest men travels to the tiny scientific colony on Mars with his fiancée, to undertake the first human marriage and honeymoon on the red planet. Not everything goes to plan, unsurprisingly, in this hard SF story. Kalt does a good job of drawing her characters, and the tale successfully explores the limited value of wealth once you leave behind the benefits of Earth’s placid environment. Good-sense, selflessness and humility can have much greater currency than all the fame and power in the world.

“The Big Day” by A. T. Sayre is a short but appealing tale of the day the first hyperspace probe takes off from the solar system, en route to Proxima Centauri. All newsfeeds constantly report on its progress, though the protagonist has little interest in the events. There’s a subtlety in this story and the underlying message is rather deeper than one might expect from the outset. Such a comment may seem vague and non-specific, but it would be a shame to say much more and risk spoiling the tale’s impact. Recommended.

“Philanderer” by Monica Joyce Evans is a particularly short story, set within a methane lake on Titan. The main character wears an engineered suit that seems to have a mind of its own, and together the human and suit explore the lake with unforeseen consequences. The story is too short to exert much impact, unfortunately. The exact nature of the suit seems to be purposely unclear, and the conclusion seems unlikely or even silly, given we are led to believe the suit was engineered.

“Hostess” by C. L. Kagmi is a short story largely composed of rather dense dialogue. An alien lifeform exists by infiltrating and subsuming all other life forms it comes across. When it encounters humans, it infiltrates neural tissue, spreading like a neurological plague. The story is thoughtful, with some interesting ideas, though the reader is only gradually informed what is occurring. The style makes the tale slightly hard work, given the close focus on the protagonist without providing much context or character development early on.

“Reaction Time” by C. Stuart Hardwick is a novelette that tells the story of the engineering development and use of an atmospheric capture system for returning space vessels. The story bears too much similarity to an engineering summary rather than a gripping story; the style is rather dry with numerous ‘info-dumps’ and the characterisation is a touch thin. When stories concern hard science or engineering issues there really needs to be more of a human element to capture the imagination and provide a good reason to keep reading. In this example, there is unfortunately little emotional connection to engage the reader’s interest.

“Amyloids for Algernon” by Corie Ralston references the famous story “Flowers by Algernon” by Daniel Keyes and bears some similarities in the scientific experimentation that’s described. An overworked graduate student is working on a ‘chaperone’ protein to clear the amyloid plaques that cause Alzheimer’s disease, and the potential cure is misused. Unfortunately—and this often seems to occur in biologically-based SF—the scientific methods employed by the academics are unrealistic. This type of story perpetuates the myth that scientists (especially biologists) routinely conduct badly planned experiments without regard to proper scientific rigour. In any event, it unfortunately didn’t really ring true for this reader.

“Standard” by Thomas Webster is a quick but enjoyable read. A repairman lives on a desolate island, avoiding the rush and technology of the modern world. He works on implants for a client, despite avoiding them himself. It explores two interesting themes; in an increasingly advanced world, many will earn their living from technology, regardless of how they feel about it; and just because a technology exists doesn’t always mean its use is advisable. Short but thoughtful.

“Stage of Mind” by Alvaro Zinos-Amaro is flash fiction. It’s difficult to provide a synopsis of flash fiction without giving everything away, which in this case would be a shame, as it’s rather enjoyable. A contractual dispute leads to a realisation for the protagonist as to why she entered her profession.

“The Boy Who Cried Fish” by D. A. D’Amico suffers somewhat from quite a common problem in modern SF short fiction: exactly what the characters are doing and why they are doing it is not explained for some time. As a result, there no justification provided for their extreme actions, and rather than feel sympathy toward them and their cause, the reader builds a growing dislike for the apparently unpleasant characters. By the time of the great ‘reveal’ it’s too late, and one hope’s the perfectly reasonable ‘bad guys’ win. This tale is set at a research station on Europa, one of Jupiter’s moons, and concerns a brother and sister risking all to prove an unlikely observation. Neither the plot nor the characters’ actions come across as especially believable.

“The Journeyman: At the Bluffs of Sinjin Trell” by Michael F. Flynn is the sixth story in the author’s “Journeyman” series, which have all appeared in Analog over the last 10 years. The novelette reads like a fantasy tale in the main—though it is set far in the future—and concerns the military adventures of the ‘Savage Archers’ and their horse-borne leaders from the ‘Western Continent’. As the tale progresses, the higher, lost technology of the past is referred to and provides some depth and background that is lacking at the start. It’s written in a somewhat jocular style, but with numerous under-developed characters, and with little context for the current war and situation provided for many pages, there’s little here to really engage the reader and maintain interest.