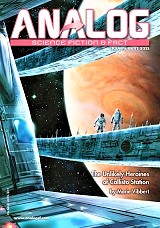 “The Unlikely Heroines of Callisto Station” by Marie Vibbert

“The Next Frontier” by Rosemary Claire Smith

“The Heroes of the Nation” by Brenda Kalt

“Minnie and the Trekker” by Raymund Eich

A majority of the stories in this issue take place far away from Earth, either within the solar system or on planets orbiting distant stars. As a change of pace, a few of the tales are set on the home planet, in the present, the future, or a past that never existed.

The title characters of “The Unlikely Heroines of Callisto Station” by Marie Vibbert are a mismatched pair of women on a space station near Jupiter. One is a manic-depressive theoretician who has never worked outside the station, the other a tough-minded technician who is only truly happy when engaged in extravehicular activities. When space pirates attack the station, the odd couple must learn to work together, despite their very different personalities, in order to save the other crewmembers from the marauders.

Despite some violence and profanity, much of the story reads like fiction intended for young adults. At times, the characters seem more like adolescents than mature professionals. The inclusion of a protagonist with bipolar disorder is an interesting touch, as is the insight into the motives of one of the pirates, who otherwise would have been a cliché from old-fashioned space opera. At full novella length, the adventures of the two heroines become repetitious.

“Next Frontier” by Rosemary Claire Smith is a tale of alternate history set during the space race. In this version of the 1960s, the widowed Jacqueline Kennedy is the co-director of NASA. Her influence, as well as that of Bobby Kennedy, who survived an assassination attempt and became President, allows a woman who defected from the Soviet Union to be selected as one of the Apollo astronauts. When a technical problem causes the flight of Apollo 11 to be aborted, she has the opportunity to be one of the first human beings on the Moon.

The author’s realistic narrative style allows the reader to accept some of the less plausible aspects of this imaginary past. The protagonist is appealing, and the story makes for enjoyable reading, but there are no surprises in the plot.

The characters in “The Heroes of the Nation” by Brenda Kalt are aliens losing a war with humanity. The ruler of the aliens ensures that his heir will survive the defeat by placing him in suspended animation and sending him incognito to a safe haven on another world.

A brief afterword explains that this story is a prequel to a previously published work. This is probably why the plot is simple, and leaves the fate of the protagonist open. The extraterrestrials are interesting, but only readers familiar with the earlier story are likely to fully appreciate this prelude.

Aliens are also the main characters in “Mandatory Arbitration” by Leonard Richardson, but this time they are of more than one type. One is a relatively small being, working in a law office on a planet where humans run a mining operation. His newly arrived supervisor is a huge, very strong creature. She discovers that the mining company has managed to have all legal disputes with its workers settled by single combat with the company’s hired warrior. The supervisor decides to take matters into her own hands.

Once the premise is established, the story’s outcome is obvious. A bit of satire of the legal profession may add some interest to a predictable tale.

In “Siliconisis” by Tom Jolly, a man builds an extremely hot environment, free of hydrogen and oxygen, in order to see if silicon-based life will arise. His experiment draws the interest of an unexpected outsider.
The basic idea is unique and intriguing, but very difficult to accept. One has to believe that life could be created very quickly in such an environment, instead of evolving over vast amounts of time. The nature of the outsider adds further implausibility.

“Seed Bombs” by Juliet Kemp is a very brief tale set in a future world where only the very rich can afford to operate automobiles, leaving cities full of unused roads. The narrator distributes nanotechnology that transforms streets into something like soil, allowing food to be grown. The premise is interesting, but there is little else to the story.

The title character of “Tin Man” by Edd Vick & Manny Frishberg survives a series of disasters and medical problems during his long career working on a spaceship, leading to multiple alterations of his body. During a very long mission to the farthest part of the solar system, he finds a way to save the lives of crew and passengers in suspended animation, at great cost to himself.

The plot is episodic, possibly due to the fact that it is the work of two authors. The heroism of the protagonist is inspiring, but some portions of the story are too similar to others to maintain interest.

“Humility” by James C. Glass takes place on a distant world where humans maintain both domed communities on the surface and a space station in orbit. The main character warns the authorities that the possibility of the simultaneous loss of the planet’s magnetic field and increased flare activity on the planet’s star could lead to disaster. When a false alarm leads to unnecessary evacuation of the space station, she faces the likelihood of the real thing not being taken seriously.

This tale of survival has a straightforward plot. Once the danger is established as possible, the reader knows it is going to happen sooner or later. The false alarm adds some suspense, but not enough to make the outcome unexpected.

In “Sample Return” by C. Stuart Hardwick, a probe intended to bring back a sample of solid metallic hydrogen from deep inside Jupiter fails to launch from a vessel orbiting the planet. The substance is expected to revolutionize technology, so the protagonist risks her life by going outside the ship to send the probe on its way.

The author goes into great detail concerning the actions the main character must perform to complete the mission. This part of the story is highly technical, and will best be appreciated by readers interested in the minutiae of working with advanced equipment in space.

“The First Martian World War” by Herb Kauderer is a very short story dealing with a three-way conflict among American, Russian, and Chinese probes on the red planet. The time lag in communication with their operators on Earth, as well as limitations in the machines themselves, renders them less than effective. This bagatelle has an enjoyably wry tone, but is very minor.

“The Last Farewell” by Alan K. Baker takes place on a future Earth completely devastated by pollution. A few million survivors, out of former billions, have been evacuated to a gigantic space colony. The last two people on the planet, about to join the others, ponder the future of the dying world.

This is a melancholy mood piece, as well as a warning against environmental degradation. Speculation that new forms of life might appear from the ruins of the ecological system fail to relieve the tone of hopelessness.

In “Rocket” by Frank Wu, genetically enhanced dogs fight killer robots. The main character is one such canine. After defeating the last of the deadly machines, the animal discovers what became of humanity, leading to a sentimental encounter with a survivor.

An explanatory note reveals that this story is a sequel, set many years later, to a previous work. This is most likely the reason that the existence of the killer robots is left unexplained. The presence of canines with increased intelligence and robots, albeit of a much more sinister kind, as well as a sense of humanity’s fate in the far future, is vaguely reminiscent of Clifford Simak’s classic novel City. The present work is not as memorable, but will be enjoyed by dog lovers.

The protagonist of “Reassembly” by Audrey Ference is a space pilot, demoted to a boring, routine job after her last mission goes wrong. She discovers that the seemingly meaningless work she performs, rearranging the components of a vast company logo in orbit around the Earth, conceals illegal activities. She also finds out who was responsible for the failure of her previous flight.

Readers are likely to be disappointed that the exact nature of the criminal actions of the company are never revealed, and that the main character does not end them. This is probably a more realistic outcome than a lone hero defeating a corrupt organization, but is unlikely to satisfy those who expect something more. The explanation for the nearly fatal disaster of the earlier mission comes as an anticlimax, and makes a secondary character seem quite foolish.

“Minnie and the Trekker” by Raymund Eich takes place on a colony planet containing nature preserves where genetically recreated dinosaurs roam. The main characters discover that an unknown predator devoured a nest of dinosaur eggs, threatening the species. They soon find out that the culprit is the pet ferret of a wealthy colonist, and that the danger is greater than they thought.

This tale of an imbalance in the food chain is unusual and interesting, but there seems to be no reason for it to be set on another world. The planet is hardly different from Earth, and the organisms involved in the plot are either from the home world, or are recreated versions of extinct species.

The setting for “Long Day Lake” by Joe McDermott is a colony world with communities protected from the deadly radiation of the outside environment by domes. A young girl whose mother recently died lives with her father in an isolated agricultural dome. Her grandmother comes to look after her while the father is at work. When an earthquake damages the protective dome, the woman fights to save the life of her granddaughter, while exposing herself to the danger of radiation.

Unlike other stories in this issue featuring disasters, this tale deals more with the people involved than technology. One need not be technically minded to understand and appreciate the hazards involved. The girl and the grandmother are both very believable characters, behaving in ways that are appropriate to their ages and personalities.

Victoria Silverwolf is not a dog lover.