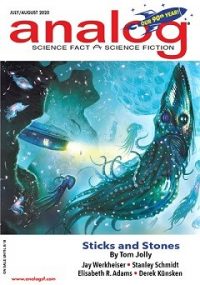 “Sticks and Stones” by Tom Jolly

“The Mad Cabbage” by Céline Malgen

“Aboard the Mithridates” by Sean Vivier

“On the Changing Roles of Dockworkers” by Marie Vibbert

“Rite of Passage” by Jerry Oltion

“Mars, the Dumping Ground of the Solar System” by Andrew Kozma

“Fuel Me Once” by Allen Lang

This issue of Analog delivers thought-provoking tales centered on wayward planets, artificial intelligences and the conundrums of time-dilation.

Longlooker and his son, both members of a race of flyers named Zoeys, embark on a coming-of-age flight in Stanley Schmidt’s “Flyboys”. For the benefit of the newly arrived humans, Longlooker goes by Bob, while his son, who has yet to earn a name, takes on Bob Junior. Soon enough, these humans precipitate more changes: a tense first contact resulted in the death of both Zoeys and humans alike, and now lingering animosities have a few members of Bob’s tribe itching for new violence. The offworlders are liable to strike first, warn the war-mongers, and when Bob refuses their call to arms, they make clear that persuading his son, amiably or otherwise, is not out of the question. Schmidt’s characterizations of Bob and Bob Junior brim with empathy, all the while framing the world of the nocturnal Zoeys, their highly differentiated sexes and their regard for names through an intriguingly alien lens that strays pleasantly far from human analogues. Perhaps it’s no surprise then that Schmidt’s world-building leans heavily on exposition-laden dialogue, which dramatically slows the pace. Perhaps equally responsible is a plot that relies just as heavily on missed connections—a point the author appears aware of, when Bob, Bob Junior and Junior’s mother pine after the offworlders’ communicators. Though the story could benefit from a brisker pace and shorter length, its final act zips toward a satisfying ending.

In “Sticks and Stones” by Tom Jolly, Captain Jennifer Kelley and her crew aboard the Beagle-4 are tasked with surveying strange readings near an outlying star. Thanks to time-dilation, Earth has transformed considerably since Kelly and crew departed. Now, having already come into contact with alien life in the form of Rosie, a sentient colony of bacteria, the Beagle-4’s crew is forever banned from returning home for fear of alien-born disease. Luckily, these strange readings reveal a potentially habitable megastructure, a hollow planetoid of asteroids scaffolded by crisscrossing trusses; the crew gives it a name: Hermit’s Cave. But upon landing, it’s clear that cozying into their new home means contending with all manner of dangerous local fauna—and contending, too, with some of Beasgle-4’s more profit-motivated members. Here, Jolly briskly executes a premise worthy of Larry Niven; Hermit’s Cave certainly induces awe, yet never frustrates scientific plausibility. And though Jolly juggles a handful characters and perspectives, it’s the melancholic Captain Kelley, whose husband advocated for the ban that prevents the Beagle-4’s return, who stands out as a highly competent and nurturing presence.

A political officer and doctor, Dr. Riviere Chaz, investigates a ship’s onboard AI for evidence of enemy tampering in Robert R. Chases’s “The Offending Eye.” Operating on behalf of the Stability, one of three human worlds, Doctor Chaz teams up with Vanya, an AI expert from Turing University. In a clever turn, the duo gains an additional member: the AI unit itself, Percival, whose recent spark of freewill has it questioning its origins. In the interrogations and developments that follow, Doctor Chaz navigates a galaxy fractured by competing philosophies of evolution. And as TransHumanists, Eternals and the Stability vie for minute shifts in political power, it’s clear even to Percival that these political games accomplish nothing in the face of a far greater galactic threat, the enigmatic Cube-Builders. Chases’s brisk dialogue smoothly captures the trio’s burgeoning friendship, while the story’s plot propels Doctor Chaz on an intriguing detective yarn that manages to include a welcome sprinkling of romance.

In Céleine Magen’s “The Mad Cabbage”, Nicole, a PhD student in microbiology, seeks medical cures among the micro-ecology of sauerkraut when a bright red cabbage signals an unexpected experimental outcome: evidently, a new type of bacteria able to tolerate unusually low ph levels. Nicole remains cautious; a mistake now could irreparably damage her reputation as a researcher and lend a rival PhD candidate the upper hand. First, she must confirm her findings. It’s clear that Magen is intimately familiar with the workings of a microbiology lab, details that are employed to great effect, and Nicole herself serves as a model scientist, reveling in the cautious reasoning, meticulous replication and trimming out of alternate possibilities that exemplify the field.

Citizens of a generational ship adapt to their prospective home in “Aboard the Mithridates” by Sean Vivier. These adaptations come in the form of gradual shifts in the ship’s atmospheric composition and small increases in its simulated gravity, and though ushered along by a helpful dose of gene therapy, they still prove painful. Zarah, a young student, takes well to these changes, unlike Gavin, her classmate, whose body struggles to adapt. Soon, Zarah’s sense of fairness cannot bear his suffering. She must, she decides, seek the ship’s bridge and advocate on her friend’s behalf. Though the ending tidies things up too neatly, Vivier skillfully employs the trope of generational voyages to contemplate a dilemma that’s certainly evergreen, yet now feels more relevant than ever: whom do we leave behind in pursuit of the collective good?

A dockworker plays caretaker for semiautonomous sorting robots in Marie Vibbert‘s “On the Changing Roles of Dockworkers.” Arriving at work, Mary, an earnest dockworker, is tasked by a lackadaisical boss to inspect a malfunctioning unit. The task unfolds routinely till Mary notices discrepancies amid the sorter’s logs: no record exists of its break in communication. Vibbert’s brisk writing and choice of first person provides ample characterization for Mary, who, empathizing more with her semiautonomous colleagues than her human ones, evolves gradually from maintenance worker to caretaker to perhaps something more. Particularly evocative are Vibbert’s descriptions of a distance-flattening Lake Eerie and the awesome, lumbering Huletts–predecessors to Mary’s semiautonomous co-workers—that dominate the lake’s shore.

A pirate and his nephew scheme to intercept valuable shipments in Rich Larson‘s “Lowlife Orbit”. Unfortunately for our space-wearied protagonist, pirating is a family business, and he’s tasked with mentoring his nephew through their current task: their targets are the reflective panels and hydrocarbon factories necessary for terraforming Mars. The spoils of terraforming remain generations away, explains the pirate to his nephew, but the nephew proves not so easily convinced. Despite its short length, Larson frames a compelling moral dilemma and characters just fleshed out enough to animate their respective arguments.

Roshi graduates from his student one-piece spacesuit to a five-piece in Jerry Oltion‘s “Rite of Passage.” Oltion paints a quaint vignette as Roshi confronts the lunar surface ahead, reveling in and adapting to his new gear—but, despite featuring a welcome flash of humor and working as the issue’s shortest piece, there’s little else to contextualize the moment.

In Andrew Kozma’s “Mars, the Dumping Ground of the Solar System,” prisoners, genetically engineered terraformers and the down-on-their-luck gravitate to Mars, a planet-spanning slum that perfectly fits its titular description. Our protagonist, a government-sponsored employee, is tasked with “figuring out what to do with” the slum’s denizens. Certainly the story’s most poignant moments lie in its descriptions of the Engineered, terraformers genetically adapted to pre-terraformed conditions and charged to toil on behalf of their non-Engineered betters. In a development reminiscent of detective fiction, our government employee is visited by a Mercurian seeking her lost daughter. It’s a quest that works well as an excuse for Kozma’s evocative, noire-ish world-building, but like this Mars itself, the thread dwindles to a rather inconsequential ending.

A microscopic herd of bots navigates a host’s system in hunt of micro-malignancies in P.K. Torrens’s “Nanoscopic Nemesis.” Torrens manages to successfully dramatize a bot-system’s cancer-killing quest, which is a feat itself, and Torrens’ choice of first-person perspective affords clever doses of humor as our bot-protagonist navigates this world of blasted tissues, “cheeky” malignancies and white blood cell comrades clearly in over their heads.

In Alec Nevala-Lee’s “Retention,” a caller hopes to disconnect their home security service, but first confronts a stubborn customer service AI explicitly designed to forestall them. Though the story could benefit from a shorter length and accelerated pace, what follows is a clever exchange that evolves into something more, as the conversation veers into the fertile ground of user profiles, data-collection and virtual assistants.

Two aspiring tycoons share drinks and hatch a plan to dominate the local energy market in Allen Lang’s “Fuel Me Once.” Quick-witted dialogue pops with humor, and the piece works well to fuel our familiar frenzy for energy no matter the consequences—an attitude that Lang admirably projects across an interplanetary scale.

In Elisabeth R. Adams’s “Keeping the Peace,” a bloodthirsty clan of alien reptiles desperately seeks new prey among the stars. Sol, our protagonist, is charged with launching the clan’s invasion force, a push of a button that’s framed by ceremony and overseen by Eldest Mother, the clan’s brutal matriarch. But admonishments of an old friend preoccupy Sol’s memory; perhaps there’s another way, Sol considers, but deviating from the ceremony means dissuading the clan’s bloodlust, or worse: confronting Eldest Mother. Adams showcases concise world-building, peppering Sol’s ceremony with avian and ape-shaped skulls, ritual sacrifice and communal chants, all of which climaxes into a poignant ending.

A colony ship’s onboard AI, who’s taken to calling itself Mord, struggles to shepherd its human cargo in Filip Wiltgren’s “Ennui.” As the ship pushes toward its target and the years press on, ennui plagues its passengers, suicide rates spike and soon the Core Directive itself is in jeopardy. Mord confronts the vagaries of human will and motivation. Mord’s cycle of attempts and failures (in one example, a malfunctioning door sparks a bit of short-lived curiosity among passengers) foregrounds our own search for meaning and more importantly, our all-too-human capacity for building it in moments great and small. The intricacies of interstellar travel, relational dynamics between Mord, her cargo and her AI cohort, the clever circumventions of programming, all add to the drama and pull the story towards what’s perhaps the issue’s most emotionally affecting ending.