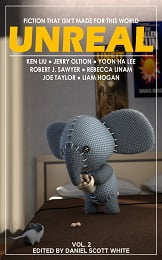 This new magazine comes from Longshot Press, an independent publisher operated by Daniel Scott White. It is the sister publication of Unfit, which specializes in science fiction. Unreal features fantasy, magic realism, and experimental fiction. Both magazines accept submissions from 500 to 5000 words, paying twelve cents per word for original fiction, one cent per word for nonfiction, and one cent per word for reprints.

“Flying Lessons” by Liam Hogan takes place in a world that resembles the modern one, but filled with magic. A teenager reluctantly goes for his first flying lesson, much like a youngster getting behind the wheel of a car. Unfortunately, he is one of the rare people who negate magic, so he is unable to use broomsticks, carpets, and other magical flying devices. A mage finds an ancient pair of wings deep inside an enchanted warehouse, and these allow the young man to soar into the sky. The story concludes in an open-ended fashion, but it is not difficult to anticipate what will happen next.

In addition to predictability, the story suffers from a flaw in plot logic. The wings, although partly mechanical, also require magic to lift the teenager off the ground. Since magic does not operate when he is near, they should not work at all.

“Damsel in Distress” by Rebecca Linam is a parody of the traditional heroics of knights in shining armor found in fairy tales. The protagonist rescues a princess from a tower, winning his knighthood and her hand in marriage. Before the nuptials, he has to save her from a wicked witch, a nasty ogre, and other familiar menaces. He soon learns that constantly risking his life for a woman with a knack for getting into serious trouble isn’t the most desirable lifestyle.

The hero’s misadventures provide mild amusement in a tale best suited for younger readers. The style is very simple, and the story’s theme becomes clear long before the unsurprising resolution.

“What Is Sewn Daintily, Is Sewn” by Joe Taylor is a strange, surreal work, strongly contrasting with the light tone of the other two original stories. A young woman experiences her first menstrual period while sewing on the balcony of her stone house. The blood frightens her, but her coldhearted parents ignore her. The next day, thirteen young men show up. She stabs the only one wearing a full beard with a long needle, killing them all. In the first of many bizarre transformations, the men turn into shrouds. This is only the beginning of a weird quest, as the woman leaves her home accompanied by the shrouds, discovers that her name is not what she thought it was, and meets a talking eel.

At first, this story seems like an allegory of adolescent sexuality. As it goes on, however, the symbolism is less clear. The author has a fine imagination, but the intent of this fable escapes me.

Victoria Silverwolf wanted to finish this review before Hallowe’en was over.