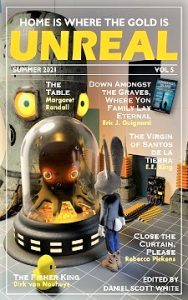 “The Table” by Margaret Randall

“Down Amongst the Graves, Where Yon Family Lay Eternal” by Eric J. Guignard

This issue carries the enigmatic subtitle “Home is Where the Gold Is.” How this relates to the quartet of original stories within its pages is left to the reader’s imagination.

“Close the Curtain, Please” by Rebecca Pickens is a surreal tale of a man experiencing a very strange evening. He loses the key to his apartment at a train station. While returning to search for it, he encounters a parade of weird musicians wearing animal skins, performing in the pouring rain without an audience. This leads him to an apartment inhabited by a woman who also found her way there by accident. As they enjoy a pleasant meal together, people fall past the window of the place.

As this disjointed synopsis may suggest, this is a story full of odd events that do not relate to each other in any obvious way. It is certainly a unique work, but the point of it escapes me.

In “The Fisher King” by Dirk van Nouhuys, a television reporter and crew seek out the title character, a figure from Arthurian legend. They also meet Don Quixote and his squire, as well as Joan of Arc.

There is little to the story other than this mixture of mythical, fictional, and historical personages. Their presence in the modern world of camcorders and smartphones may be of some interest, but much more could have been done with the premise.

The title of “The Table” by Margaret Randall refers to an item of furniture that seems to move by itself. This causes the narrator to ponder the nature of consciousness, and to reminisce about inanimate objects given the names of Twentieth Century revolutionaries. What happens to the table at the end suggests that something stranger than suspected is occurring.

The entire plot could be fully described in a sentence or two. The vast majority of the text consists of the musings of the narrator. More of a speculative essay than a story, it is unlikely to satisfy most readers of fiction.

“Down Amongst the Graves, Where Yon Family Lay Eternal” by Eric J. Guignard is a more traditional work than others in the magazine. A man’s search for records of his ancestors leads him to a remote cemetery. An encounter with a mysterious figure in an old crypt leads to revelations about the family’s history, and the man’s own fate.

Although the conclusion is somewhat ambiguous, for the most part this is a conventional tale of the supernatural. Fans of eerie horror stories are likely to enjoy it, even if parts of the plot are predictable.

Victoria Silverwolf has been seeing a lot of wild turkeys near her house recently.