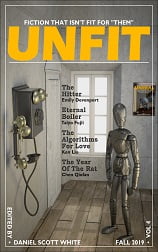 “The Hitter” by Emily Devenport

This relatively new bi-annual science fiction magazine describes itself as containing “fiction that isn’t fit for ‘them.'” Like its sister publication, the fantasy magazine Unreal, it seeks stories up to five thousand words in length, paying twelve cents per word for original fiction and one cent per word for reprints and nonfiction. Editor Daniel Scott White states that the magazine publishes “quantum fiction,” “scientific realism,” and “augmented reality.” The current issue features one original story and one newly translated story, as well as two reprints.

“The Hitter” by Emily Devenport takes place on a distant planet in a high-tech but oppressive society of the future. Ordinary people are “arrested” (made to remain at a certain physical age until they die) and programmed to serve the elite. The narrator is one such person, who serves as companion and co-worker to a man researching the financial potential of the planet. After he dies, a girl arrested to remain a young child arrives on the planet, apparently the sole survivor of a spaceship disaster. Only after a pair of men show up, asking questions about what the dead man discovered, does her true nature emerge.

This story is full of interesting concepts and a generous number of science fiction ideas. The style is simplistic, and the plot is overly sentimental at times. The villains of the piece are one-dimensional, compared to the protagonists.

The title of “Eternal Boiler” by Taiyo Fujii, translated from Japanese by Toshiya Kamei, refers to a device that converts human body heat into useful forms of energy. The invention ushers in a world of cheap, clean power. The only drawback is that the machine makes use of ammonia, leading to an unpleasant smell everywhere on the planet. The creator of the gizmo has something else up his sleeve.

This is a light story with a touch of comedy. The author tries hard to make the speculative technology seem plausible, although in essence it is a perpetual motion machine. The plot ends in an anticlimactic fashion, making the whole thing into a shaggy dog story.

Victoria Silverwolf wonders who “they” are.