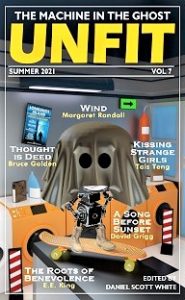 “A Song Before Sunset” by David Grigg (reprint, not reviewed)

“Thought is Deed” by Bruce Golden

“The Roots of Benevolence” by E.E. King

Bearing the subtitle “The Machine in the Ghost,” this issue offers four new works of imaginative fiction.

The narrator of “Wind” by Margaret Randall has recurring dreams about a young woman of one hundred thousand years ago. As the title might suggest, one thing the narrator and the prehistoric woman have in common is struggling against strong winds.

The premise is intriguing, but very little is done with it. Much of the narrative consists of philosophical musings about wind and dreams. There is no real resolution, and the entire story can be read simply as a dream diary.

“Kissing Strange Girls” by Tais Teng takes place in a fantasy world full of supernatural beings. A young man sets out on a quest to find his true name and a bride. Along the way, he encounters a mermaid and a wasp-woman, both alluring but deadly. He must use his wits to escape their clutches and find a human woman to marry.

Although the plot is simple, this is a pleasant story with the feeling of a folk tale. The opening paragraphs inform the reader that time is uncertain in this world, mixing the past and future. This has nothing at all to do with the rest of the story, and could have been omitted without changing anything.

The narrator of “Thought is Deed” by Bruce Golden is punished for writing forbidden words in an oppressive society. He is given injections that cause his body to slowly deteriorate, while he remains helpless and bedridden. Only in his mind is he able to escape this fate.

The story contains a metaphor for the narrator’s condition that is appropriate, but may seem overly familiar. Some elements, such as the nature of the narrator’s crime, are rather vague, lessening the impact of an important theme.

In “The Roots of Benevolence” by E.E. King, a mysterious illness causes very wealthy people to suddenly become philanthropists, then die from brain aneurysms. Medical researchers discover the cause of the strange epidemic, and experience some of its effects for themselves.

The premise reminds me of David Brin’s Hugo-nominated story “The Giving Plague.” The current work is not quite as convincing as that frequently reprinted tale. In addition to certain implausible aspects of the disease, the story suffers from obvious references to people in the real world. To refer in passing to a billionaire named Emon Lusk, for example, is just silly.

Victoria Silverwolf notes that two of the authors in this issue also appear in the latest number of Unreal, the magazine’s sister publication.