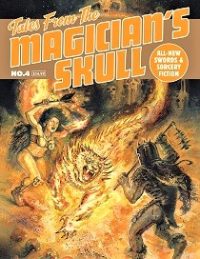 “Guardian of the Broken Gem” by John C. Hocking

“Masks of Silence” by James Enge

“Cage of Honor” by James Stoddard

“Thieves of the Fallen World” by Tom Doyle

Eight tales of adventure in fantastic realms fill the pages of the latest issue of this bi-annual publication.

In “Guardian of the Broken Gem” by John C. Hocking, an agent of the King undertakes a secret mission to infiltrate a place where treasures stolen by grave robbers are offered for sale. The King seeks to obtain a certain ring with extraordinary magical power. The agent discovers the being enslaved by the ring, makes use of its power to overcome his enemies, and must decide whether to free the being or keep it a prisoner.

This violent story will satisfy readers looking for fast-moving fiction with plenty of action. The ring and the entrapped being are so powerful that the protagonist becomes little more than a passive observer.

“On Death Seed Island” by Adrian Cole features a ship full of adventurers who land on an island in search of fresh water. The isle turns out to be one vast living organism, with an ancient cosmic being of great evil at its heart. Unable to flee, the heroes struggle to destroy the extraterrestrial demon before it can spread and wipe out all of humanity.

Combining sword-and-sorcery derring-do with Lovecraftian horror, this story’s most compelling aspect is its setting, a place where malevolent plant life has entrapped many ships over vast amounts of time. Given the overwhelming malice of the monster, readers may find that it is defeated all too easily.

In “Masks of Silence” by James Enge, a dwarf goes to visit a close human friend who lost his hands in a previous adventure. The healers caring for him grow artificial, living replacements, but he is unable to accept them. He creates his own magical mechanical hands. A crisis occurs, involving a spell that induces total silence and an unexpected visitor from the future.

As this brief synopsis may suggest, there are multiple plot elements in this story, not all of which fit together neatly. A subplot about two sisters who are deadly enemies is left unresolved, for example. The constant barrage of unrelated events keeps the reader turning the pages, but not fully satisfied.

“Cage of Honor” by James Stoddard is an unusual story to find in the magazine, as it takes place in a post-apocalyptic future rather than a fantasy world. The main character is a genetically modified hybrid of bird and human. He wanders through a desert wasteland in search of water. A woman appears before a fountain, and takes him into a series of hallucinatory adventures based on myths and fairy tales. The reason for these encounters leads to both triumph and tragedy.

The plot elements are imaginative and unique, creating an intriguing story that draws the reader into its strange world. The resolution has a sense of inevitability to it. The protagonist acts with courage and resolution, even though he knows that his genetic programming limits his free will.

The setting for “The Witch’s Hound” by C. L. Werner is a fantastic version of medieval Japan. A gang of criminals hire a wandering samurai, who specializes in destroying demons, to eliminate the monster that is killing them one by one. Because it is a ghost rather than a demon, the samurai’s weapons have no power over it. Instead, he must confront the specter, and the woman who created it, with words.

The most interesting part of this tale is its historical background. The author creates a convincing portrait of the time and place. The reader learns the nature of the ghost at the very start of the story, lessening the impact of its later appearance in battle with the samurai.

As its title suggests, “The Dead Queen’s Triumph” by Ryan Harvey involves a deceased monarch returning to the land she ruled centuries ago. Her heart, made immortal by magic, resides inside a mechanical body. With an army of monsters made up of bits and pieces of various creatures, and an array of poisons that can transform enemies into loathsome beings, she seems impossible to defeat. The protagonist uses subtle ways to oppose her, while acting as if he is acquiescing to her wishes, in order to protect his unborn children.

The queen is an effective depiction of pure evil, laid low by her own megalomania. The touch of steampunk added to the story by her robotic body is not always gracefully integrated into a tale which is otherwise traditional fantasy.

The narrator of “Thieves of the Fallen World” by Tom Doyle journeys deep underground with a woman seeking a treasure from the subterranean realm of demons. Unknown to her, the narrator has his own reasons for joining her on her quest.

The narrator is a bitter, cynical man, mourning for the tragic loss of his family to demons. This grim characterization is the most effective aspect of the story, which otherwise resembles a typical dungeon crawl from a roleplaying game.

“Apedamak’s Army” by Milton Davis takes place in a fantastic version of ancient sub-Saharan Africa. A trio of soldiers follows a band of retreating enemies, to ensure that they do not return. Along the way, they find a village menaced by jackal-headed monsters. The main character has an amulet that gives him superhuman strength when he battles them. Further adventures reveal the history of the amulet, and give the protagonist a hint of his future.

As with other stories in this issue, the setting is the most intriguing element. The author creates a fine sense of history and culture. The main character’s triumph over the monsters depends entirely on the amulet. This fact, combined with the story’s open-ended conclusion, render him less heroic than one might hope.

Victoria Silverwolf would like to point out that this issue also includes an appendix that lists roleplaying game statistics for some of the monsters and magic found in the stories.