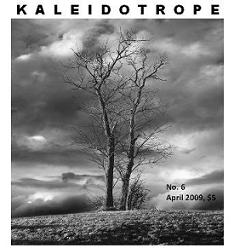 “The Tenant” by Mark Rich
“Louis Jazz, Son of God” by Ward Crockett
“Malkazaar’s Food and Beverage Department” by Eric Stever
“Replicate Fade” by Heather Clitheroe
“To the Body” by Joshua Landers
“House Call” by Beth Hudson
“Single Handed” by Simon Petrie
“Evil Sleeps in Pink Pajamas” by Casey Fiesler
“The Eye of the Beholder” by Shannon Anthony
“Little Precious” by Carolyn Watson
“The Art of Biting” by Rachel Swirsky
“The Almost Adventures of Immaculada Footstool” by Katy Wimhurst
“Passion Play” by Carol K. Howell
“Dust to Dust” by Kurt Kurchmeier

Kaleidotrope is only for those who really need to mainline SF/Horror. Many of the stories have interesting ideas that are poorly written or do not tell a compelling story. Others try too hard to be “horrific” and/or are too convoluted for their short length. There are nuggets of interesting ideas in these stories but most are overwritten and under-thought.

The first story is a good example: “The Tenant” by Mark Rich is a farrago of ideas. Gods are real and affect the time/space in which they reside, so chaos ensues for the ordinary man. The ordinary man in this story has no name and is a landlord in this post-God reality world. Within this slight seven page story there is a possible love affair, magic seems to be real, a mollusk God is dreaming a new reality, protections of all kinds must be enforced but are continually fluid as the Gods’ seem to be whimsical, real names are magical and thus not shared, and a host of other things are glossed over. Whew! This background needs to be studied and presented with more explication. The ideas are gold, the presentation is not. I suggest that this is merely a prelude to a longer, richer, more coherent work

The next story is also too short for its complicated background; however, this background did not appeal to me and so the story seemed to drag. ”Louis Jazz, Son of God” by Ward Crocket is a post apocalyptic nightmare where the top one hundred records of a future year that continue to emanate from a burnt out city are considered the voice of God. Each song from 100 to 2 is by one of the major prophets of this era, while the number one song, “Son of God,” by Louis Jazz is exactly what it claims to be. The protagonist is sent by the rulers to keep the countdown repeating by making a blood sacrifice in the control room (I think). In and amongst all of this confusion Mr. Crockett adds talking cats and ruling birds and living human skeletons. It is an odd story that just may be your kind of thing. I found it tried too hard to be different just for the sake of being different.

The next story takes place in a magical kingdom at war with another magical kingdom. The catch is that the people who die fighting are resurrected to fight as zombies. “Malkazaar’s Food and Beverage Department” by Eric Stever is told from the point of view of the cook of one of the wizard kings whose sons are inextricably involved with the war. It is a well enough told tale about the stupidity of war and the interchangeableness of rulers.

“Replicate Fade” by Heather Clitheroe, like “The Tenant” above, has an interesting back-story. The world she posits deals with the replication of needed body parts through genetic manipulation instead of using parts from a living human being. Now, those who have replicate parts have some sort of sickness called ‘fade’. A down and out ex-government soldier deals with his past while seeking to capture a young girl for a large amount of money. The surprise is not too surprising, but the idea is interesting.

Kaleidotrope is open to all kinds of fiction, so the next entry is not fantastic in any way. “To the Body” by Joshua Landers is probably the best written new story here. It concerns a man who boxes in order to make money in order to help in his girlfriend’s continual search for her long-lost teenage daughter. The relationships of all three people involved are strongly drawn.

A lighthearted story follows, which is rather sorely needed at this point. “House Call” by Beth Hudson is about a woman named Ash who envisions paranormal activity. Ash is called in by Bob (an ex-boyfriend, who does not believe in such things) to deal with “something I don’t understand in my apartment.” She then decides to bring in another friend, Paul, to help with the problem. The interaction between this trio leads to a lighthearted romance based around a light magical idea.

“Single Handed” by Simon Petrie is a conventional murder mystery in space that revolves around an AI that has problems following Asimov’s three laws and an innovative murder weapon that could have easily been published in Analog.

The best first line goes, however, to a short-short titled “Evil Sleeps in Pink Pajamas” by Casey Feisler. It begins with“Evil twins are the worst.” Can’t argue with that. The story is a contemporary comedy about an evil twin that steps out of the mirror one day and ruins the narrator’s life.

In “The Eye of the Beheader,” Shannon Anthony gives us a short monologue of a gruesome murderer hired by a husband to kill his present wife in order to get a new one. It is a Bluebeard by proxy tale.

The inane world of celebrity adoptions is ribbed by Carolyn Watson in “Little Precious,” as a famous actress adopts a child from a foreign land who turns out to be a demon. It is played for laughs, needling the folly of our celebrity culture and the spin of Hollywood press.

“The Almost-Adventures of Immaculada Footstool” by Katy Wimhurst is a one joke story about writing bad stories. The title is almost as long as the story itself.

And “Passion Play” by Carol K. Howell is another monologue from a man destined to search out a certain dictator in every time line and kill him. Short, but chilling.

The one of these short vignettes I liked best was the final piece in the issue, “Dust to Dust” by Kurt Kerchmeier. It is a small story about the end of things and what is important at such a time. It is a poignant story.

Kaleidotrope is not a magazine for everyone. This issue presents a group of passably decent stories written at (presumably) the beginning of (some of) the authors’ careers. If you are interested in reading the first (or nearly so) stories of possible New Names in the field then this magazine is for you. Kaleidotrope is published twice a year (April and October) and can be found here.