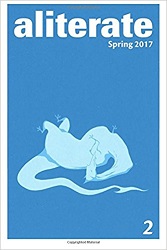 “When the Moon Fell into the Sea” by Story Boyle

“The Fold” by Aaron Worth
“Drowning Joys” by Jason Kimble
“The Dragon and the Orange Juice” by Genoveva Detelinova (Translated by Kalin M. Nenov)
“The Reordering of Tonia Vivian” Karen Heuler
“Katausky vs. Paper” by Jon Hakes

Aliterate is a new magazine of speculative fiction with a literary bent. The current issue contains six stories.

“When the Moon Fell into the Sea” deals with a problem when a dragon washes up from the sea in a small village. Story Boyle‘s village society is chock full of various rituals, and when Des discovers the dead dragon, he wants to perform the ritual for a dead dragon. Trouble is, it has never happened before, so there is none. The village witch cobbles together something, but Des has to get various items from other villages. It’s a fairly good story, most interested in describing the society and the assumptions than in any plot.

Aaron Worth‘s “The Fold” is about an odd sort of paper folding—not origami, but something that becomes a fad among some scholars, and which quickly breaks the school into three cliques devoted to the—somewhat mystical—shapes they are folding. The main problem with the story is that it reads like a lab report. The events (probably meant to be metaphorical) are described but without any actual life or characterizations. It’s an extreme example of tell, don’t show, and without even characters to make it more than just a dry report.

“Drowning Joys” by Jason Kimble is the story of Callum, who seems to be some sort of Scottish creature who turns into a water-breathing horse. Callum starts to hook up with Dmitri and . . . I’m afraid I lost interest. The story is very unclear. I’ve tried reading it several times but only have a vague idea of what’s actually going on with it.

I always like to see science fiction from non-English-speaking authors; they tend to look at things with a different eye. “The Dragon and the Orange Juice” is by Bulgarian author Genoveva Detelinova about Vladimir, a relatively young wizard who discovers the other wizards are sending a dragon to “the other world”—which is actually our world. Seeing how this will disrupt things, Vladimir struggles to control the damage. This is a lighter story, with some nice funny lines, but goes on a bit too long for the idea.

Karen Heuler contributes the very strange story “The Reordering on Tonia Vivian.” Tonia was a young girl who started hearing a voice in hear head, which she named Vivian. But when she’s in an accident, it’s discovered she has a tumor and, once removed, Vivian is gone. Meanwhile, a girl name Vivian is born with a foot coming out of her chest, which turns out to be part of her absorbed twin, who she calls “Tonia.” It’s a complicated story about Vivian trying to escape into the world. But the story really doesn’t connect the two sections, other than connecting them with a cruel little girl named Sophie. The concept is interesting, but the story doesn’t live up to it.

It’s paper folding again with “Katausky vs. Paper” by Jon Hakes. When Katausky was a boy, his father tells him that if you fold a sheet of paper 13 times, it opens a gate and lets out the Paper Demon. Kautauski grows up to a dull life as an accountant at a paper mill, and spends his free time alone in an old house with hoarded material and a group of miniature people. Kautauski’s somewhat offbeat life is changed when a woman from work slices through his defenses and starts to date him. There are a lot of nice touches here, and this story works the best overall of the stories in the magazine.