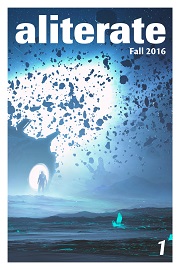 “A Companion for the Stars” by Diana Estigarribia

Since this is a new bi-annual journal, it is worthwhile to mention the magazine’s governing philosophy. The editors briefly discuss the history of literary vs genre writing and bemoan the loss of plot and character development in what is commonly considered literary fiction. They also point to the improvement in quality within genre writing as a positive trend. They conclude: “we hope to highlight brilliant writing at this intersection and offer something to both the fan of contemporary realism and those who swear by fantasy and science fiction.”

Thus we can expect that the focus of the magazine will be SF/F with literary characteristics, but not stories that sacrifice plot in the process. As we see below, the first issue is thematically oriented around loss, the vulnerable in society and wrong choices.

“A Companion for the Stars” by Diana Estigarribia leads off this first issue with a story that speaks of Laika, the Russian stray who became the first dog sent into space, from her point of view. The historical elements are well placed, but the story isn’t particularly strong. We are told of Laika’s early life and training as well as the launch, but it is not overly impactful. The final segment as she dies from overheating becomes more metaphysical and somewhat silly. It makes for a passable read, but falls short as the lead story of a new magazine.

Sarah L. Byrne’s “Joined” is a clever and engaging combination of SF “what if” and human relationships. In it, Tracy and Alana have used nanotechnology to Join. This allows them to feel each other’s emotions and desires. When Alana dies, Tracy starts having trouble with her half of the device. The story melds the logical consequences of this technology with some interesting twists that leave the reader wondering where the imagination ends and reality begins.

“Rubble People” by Matthew Sanborn Smith is simply amazing. Set in a world where the army uses a psychic equivalent of telepresence to allow soldiers to create amalgamated bodies for war, we are presented with the viewpoint of one of these soldier’s wives. The writing is tight and strikes a perfect tone for the world Sanborn Smith has created and the first person narrator used. The story itself shines as the logical progression of the narration takes us to an ending that feels correct and all too human. Read this story.

“Desert Stand” by Richard C. Rogers is not actually SF. Set in the northern Mexican desert near Acapulco, a man who is hiding out from a gangster inadvertently befriends a mentally deficient child. When the gangster’s thugs come looking for him he has to make a tough choice. The story is interesting and well written, but not extraordinary.

“E Hyderabaadus” by Megan Chaudhuri is the story of an American woman living in southern Mexico as a phone repairer. When she learns that some of the phones have been contaminated by E Hyderabaadus, a bacteria that eats electronics, she decides to chase it to the source. Chaudhuri has done a solid job of creating two sets of parallel narratives in the relatively short space of her story. The first has to do with the fact that the mecánica suffers from Down Syndrome and, despite gene therapy is prone to early onset Alzheimer’s, the second with her need to save money for care once the dementia sets in. The tale is well written and thought provoking.

Nick T. Chan gives the reader an eerie view of the last humans on Earth in “Beyond the Sea”; the prophet, his two wives and Isla, his disobedient third wife. The narrator is a mechanical mind animating spoke bodies, similar to the ancillaries in the Leckie trilogy, but based on cloning. As the prophet dies, the narrator is forced to deal with unresolvable conflicting commands. The piece is atmospheric and melancholy, from the constantly repeating “Beyond the Sea” by Bobby Darin, to the futile patterns of behavior in the characters. The ending is solid and surprised me a little. This is another story worth reading.

Elian Crane writes “Memento Vivere” about a fad of art-suicides where people try to one up each other in their means of death. Written in first person POV, the narrator tells us the history of the fad and his efforts to modify it. The piece is well written and engaging. The ending is a nice ray of light in an otherwise dark story.

Despite the somewhat weak lead story, the first issue of Aliterate is encouraging. Each of the stories is solid and Sanborn Smith’s entry is marvelous. It is interesting that Mexico is a repeated setting as is the repeated use of Latin. I am not certain if this was a deliberate choice or not, but it signals to me the internationalist and multilingual orientation of the magazine. We will have to wait for further issues to see if there is indeed a pattern or if it was happenstance. I look forward to seeing more from Aliterate.

Robert Turner is a professor and longtime SF/F fan.