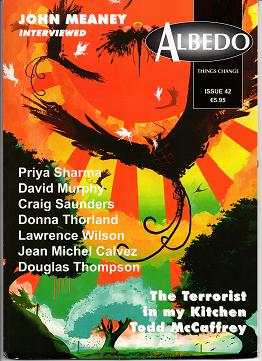 “Filling the Bowl” by Lawrence Wilson

“Filling the Bowl” by Lawrence Wilson

A brother and sister take refuge at the family cottage in the wake of unexplained devastation. But as their time there stretches, it becomes clear to them that they are alone, as none of the usual neighbors are arriving. The more pressing mystery, however, is the sister’s fascination with a creature she calls the pooka and how that will play into their future.

Lawrence Wilson does a good job setting the tone and the atmosphere, and creating a sense of mystery about the siblings’ future and past. If there’s anything to critique, it’s that not enough is made of the past to explain what happened and why the siblings are at the cottage. Otherwise, what’s left unsaid lets the reader fill in the blanks in a meaningful way.

Rrio is two hundred and thirty years old, seemingly immortal, has the Wolf King’s ear, and is favored by the Cherubs. “Volwys” is set in the distant future and contains elements of science fiction, fantasy, and theology. There is mention of various ages that have passed, which connote world-altering events and other common tropes. For instance, the amount of cars in the twenty-first century and their negative impact on the environment are discussed as indicators of modern day idiocy. The problem with this type of commentary is how absurd it is. Historians do not look back at the ancient civilizations and poke fun at their lack of understanding. Who the Wolf King is, what Cherubs are, and where Rrio fits into everything is sorely lacking explanation. “Volwys” feels like a trilogy poorly summarized in short story form.

“The Terrorist in My Kitchen” by Todd McCaffrey

Marla is three weeks shy of her eleventh birthday. But the terrorist in her kitchen, with a bomb strapped to his chest, may not let her celebrate that occasion. Marla tells the reader in her diary, that the terrorists invaded her home looking for her dad. Now she, along with her mom and her little brother, are hostages in their kitchen, at the mercy of Ahmed (formerly Steve), a Muslim-convert displeased at the treatment of Islam in America. Why Marla’s dad is of any value is not explained.

The concept of “The Terrorist in My Kitchen” is that Marla is writing what the reader is reading in her diary. However, it’s never clear if the entire story is written down or which parts are. It’s made to seem that everything is, but it doesn’t work. Marla is also far too calm, given the situation she’s in, and her age cannot excuse that. Plot devices like you can’t eat toast with one hand if it has butter or jam on it is ludicrous. The whole story just doesn’t work.

Drith and Shard are on the run, heading to the ancient city of Seleucia. Set in an alternate history Earth, the story contains many fantasy elements, including magic and archetypes: Drith is a skilled thief, Shard a swordsman. Upon their arrival, they are taken to Prince Nikoleides who tasks Drith with finding a particular book in possession of his rival Ambrose. Shard is to remain as human collateral. Truths unfold as Drith’s mission progresses, unravelling a far more intricate situation than it once seemed.

Donna Thorland mixes real world settings with fantasy elements perfectly. Settings are described in great detail, while maintaining concision and flow. The plot is never what it seems, and is always believable. There is also a good amount of backstory to develop the characters, and their relationships and motives. “Drith” is a must read.

“Night of Our Red Eye” by David Murphy

The protagonist describes his life: he flies from city to city, against his will, for reasons unknown, rarely spending time on solid ground. Is it a social experiment? That’s his best guess. He no longer pays attention to where he’s going. Cities have been reduced to airport codes. He favors landing in LGW, taking off in GIG; the small window next to his seat his only means of experiencing the outside world.

By the end of “Night of Our Red Eye,” nothing is explained. But nothing has to be. The greatest mystery is who “Our” refers to, and what the narrator is willing to do to be a part of it. David Murphy’s big question to the reader is: what is really important and are you willing to go get it?

“Mr Wobble” is written well. Very well. It starts off strong by establishing the setting, Dean, and the flow of the narrative, which has a flair for reality despite the subject matter. When Deano and Miles are interacting, the reader feels like they’re in a room with a father and son, goofing around before mom says it’s time for sleep. The plot slides a little as things progress, and leaves a loose end or two, but the originality more than makes up for it.

Pete’s days as a fisherman ended after a life-altering injury at sea. Now his brother, John, is left to continue the family trade, while Pete makes a living as a fishmonger with a bad leg and a beautiful wife named Marianne. Their marriage isn’t in great shape, though, and a rift is forming between them all. Marianne is hiding something. She goes off on her own, she has strange tendencies, and Pete’s distrust of her is brewing. Pete must decide if Marianne’s secrets are worth their marriage.

The mystery behind Marianne seems too obvious to make “Fish Skins” a worthwhile read, with most readers able to pick up on the not-so-subtle clues throughout the story. But the ending brings about a few surprises that are pleasant enough, combined with the strong writing, to make it a good time.

It needs to be noted that this issue of Albedo One is marred with grammar, punctuation, and word errors. None of the stories are unreadable to any degree, but having so many errors is unacceptable and should be brought to the magazine staff’s attention.