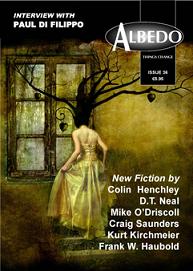 “Grass Can Be Weeds Too” by Craig Saunders

“The Entire City” by Mike O’Driscoll

From Dublin, Ireland, comes a nice magazine called Albedo One (or 1), with a stylish, glossy, four-color cover by Spanish artist Enaer. Besides the stories, it contains a heavily (b/w) illustrated interview with Paul Di Filippo (illustrated by Di Filippo himself with “envelope art” pasteups) and a very good book review column.

I may be biased, but it seems that semiprozines coming from outside North America have a certain richness in content that’s sometimes missing in our magazines. Each of the stories in this magazine is at least a little better than competently written; if it weren’t for the fact that one of them isn’t even a genre story, I’d give the editors 5 out of 6 points. But there are viewpoints and ideas here that I feel you don’t normally see in our magazines. Fact is, for many NA magazines, I feel as if the stories are written on the level of, say, a TV or movie tie-in; they roll right along, they’re well written, they involve you at some level, and they’re not entirely memorable. This is not meant to be a slam at either tie-in writers or NA writers and editors in general; it’s not meant to be a slam at all.

But when I read some of these stories, I have to work at them. They don’t yield their secrets easily, but the reward, for me, is greater than from reading more accessible works. And, as in the TV series Torchwood, it seems that British and European writers understand the Cold Equations better than most North Americans.

“Twinkle, Twinkle” by Colin Henchley takes us back to the firebombing of Dresden in 1945. You’ve probably read Vonnegut and know what I’m referring to; the Allies were supposed to be wiping out factories and war materiel, but in fact even though Dresden was one of the few unbombed cities in Germany, they probably didn’t contribute much to the war (Dresden was known for its china figurines, for one thing). Three thousand tons of bombs in three waves of bombings created a firestorm so fierce that there was little left of the city when the firestorm burnt out. It remains only a little less controversial a bombing than those of Hiroshima and Nagasaki.

This story takes the side that it was an evil act and, since evil creates evil, something fierce came out of Dresden and attacked the crew of the Betty, a Lancaster bomber (the Brits used Lancasters, the Americans used B-17 “Flying Fortresses”). What happened to the crew of the Betty after the bombing and after the war is the story. Plausible? Not for me. Well written? You bet. And the ending hides a kicker, too.

“Fragile Fathers, Shattered Sons” by Kurt Kirchmeier is a darned good story. What if men were drafted into a war that took their spirits but left their bodies transformed into some kind of glass. Only if the men return from the “other side” do their bodies retransform into flesh. And we don’t know who’s doing the drafting, and there’s no way to stop it from happening.

The story’s unnamed protagonist is ten when his father is drafted at the supper table, and he and his brother and their mother have to watch helplessly as he changes into glass. But what if there’s a way to stop the drafting, even if it’s at a great cost? Kirchmeyer is a Canadian writer, and he’s a good one.

“Grass Can Be Weeds Too” by Craig Saunders puzzled me. It’s not a genre story; it’s well written, but why is it here? It’s a story of a woman who weeds her garden, even in the rain. And maybe it should have been published in Alfred Hitchcock’s Magazine (or Ellery Queen’s Mystery Magazine) instead of here. But then again, perhaps Albedo One’s editors just want quality writing even if it’s not genre.

“The Entire City” by Mike O’Driscoll, is a real gem. It’s moody, and layered and mysterious and by one of Albedo’s many editors. It’s like a SFnal take on film noir, set in a mysterious place called Provenance. Reminds me in a way of Lethem’s Gun, With Occasional Music, but not really, as this is much darker.

In a town called Provenance, a floozie named Darla and men named Snow, Thingstable, Firstnighter and Escovedo are involved in a 5-sided triangle involving sex, booze, murder and mayhem and a complicated dance that moves between a bar named El Camino, a hotel and the trunk of somebody’s Nissan. Who’s in the trunk? Is it Snow? Hector Escovedo?

Who paid whom to kill who? Who gets to leave Provenance forever? It’s something you’ll need to read several times and probably never will be sure about, but it’s worth the time spent.*

“Rotgut” by D.T. Neal is weird. A man on a train blows up. No, he’s not a terrorist, he’s been infected or infested. I can’t say a whole lot more without spoiling the story, and I don’t want to do that. I liked it, in a morbid sort of way.

“Homeward Journey,” by Frank W. Haubold, translated by Wilf James, kind of disappointed me. I liked the writing, which was originally in German. The characters are well drawn and the situation well set up, but I can’t tell you why I was disappointed without spoiling the story. You might like it better than I, but all I can say is that as opposed to most of the stories in this issue, this is a “feelgood” kind of ending. And I don’t feel it was especially SFnal in its conclusion, more like fantasy. Again, without spoilers, it’s hard to tell you what I think is wrong with it.

All in all, though, I’d say you should definitely look up Albedo One for your reading pleasure.

*In spite of the fact that Driscoll, like Jim Butcher, doesn’t know the difference between “lying” and “laying”: “…she dreamed she had pennies laying on her eyes.” Come on, kids, it’s not rocket science: “lay” takes an object.