The double-handful of photos hoisted at random from the bottomless box turned up photos from two worldcons from the 1990s, L. A. Con III and LoneStarCon 2.

The following photos offer just a taste of L. A. Con III. Many more are to come in subsequent installments.
This was only my third worldcon, and first since 1978, Kansas City in 1976 being my first. 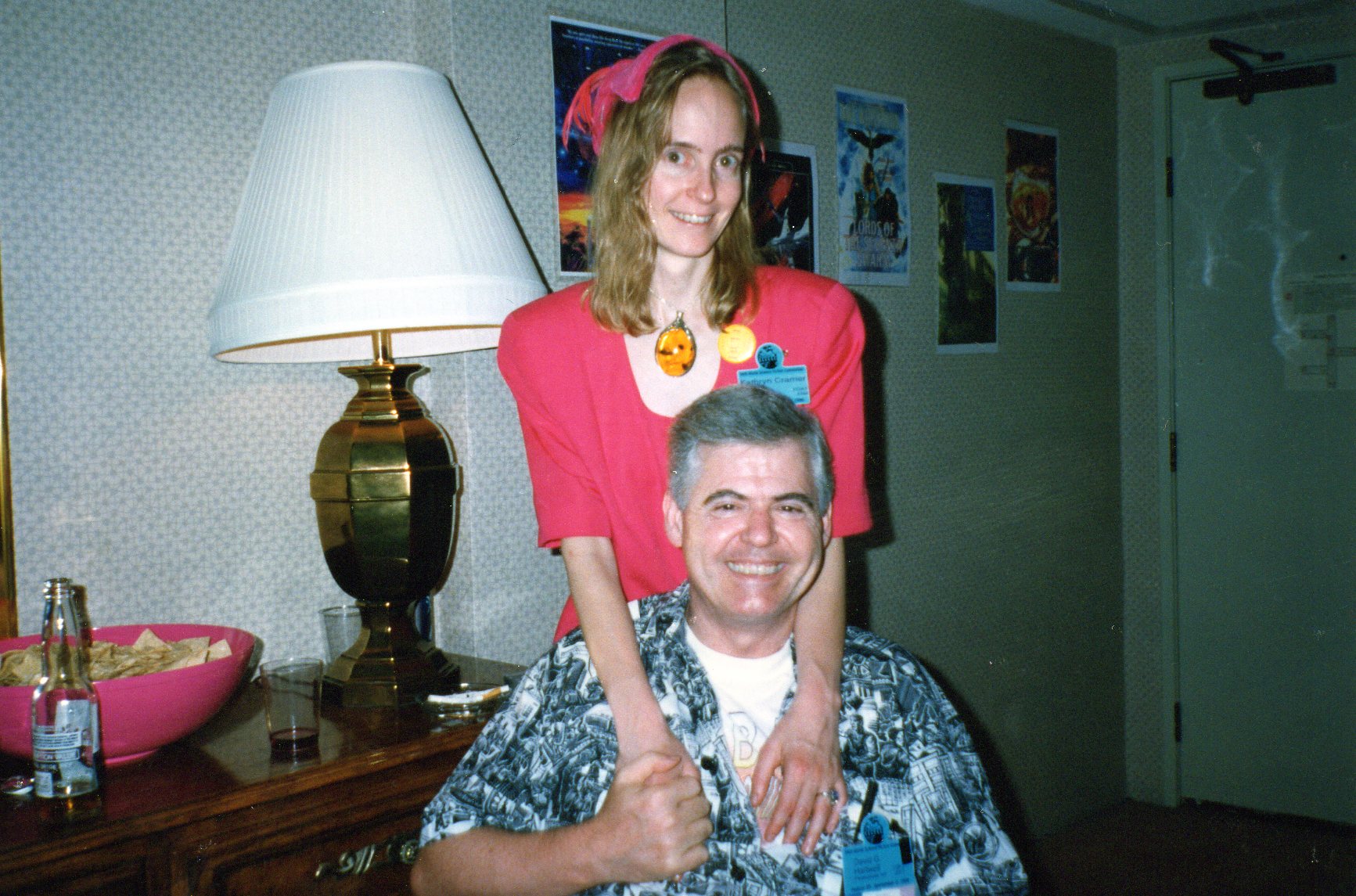 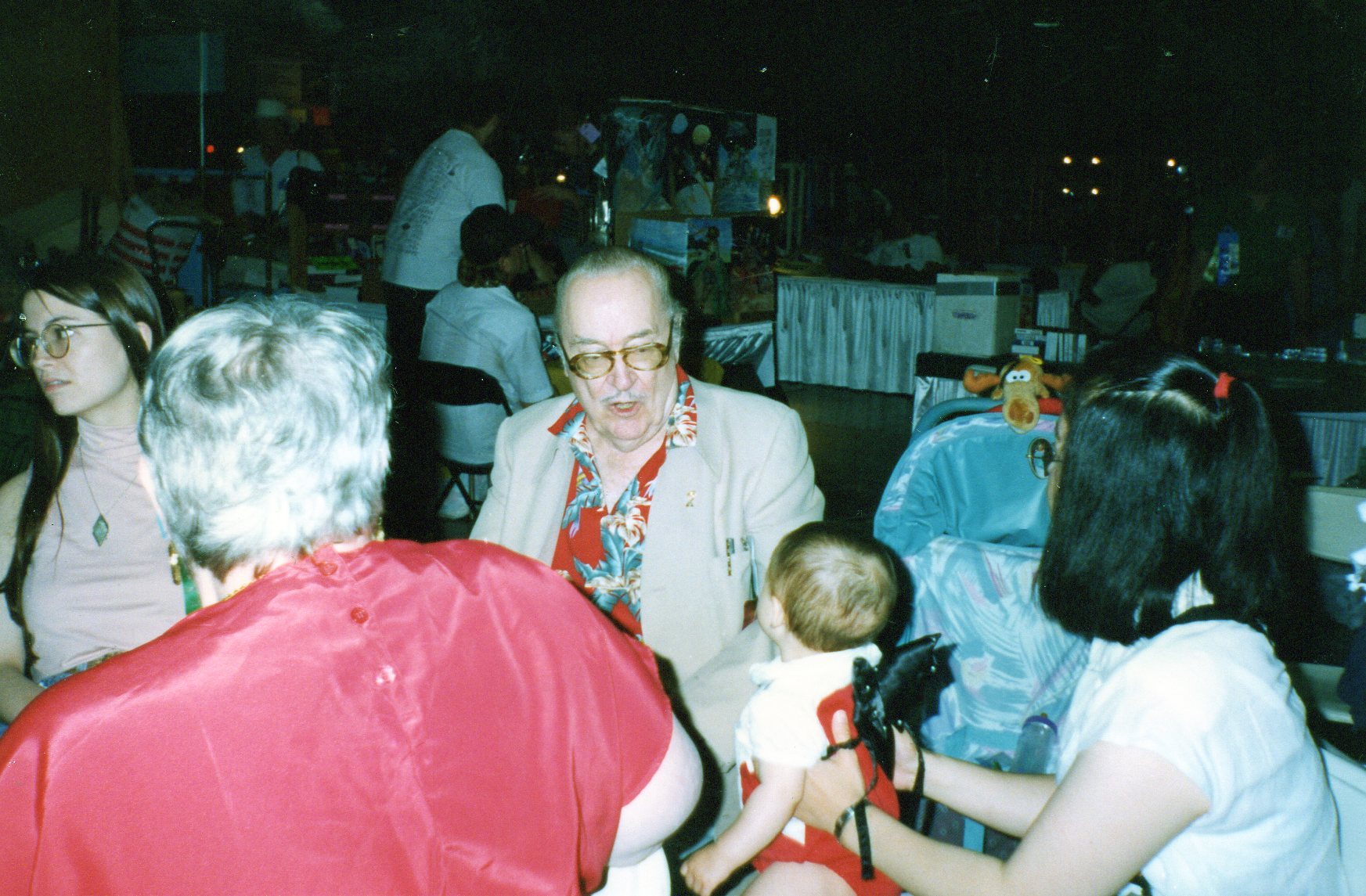 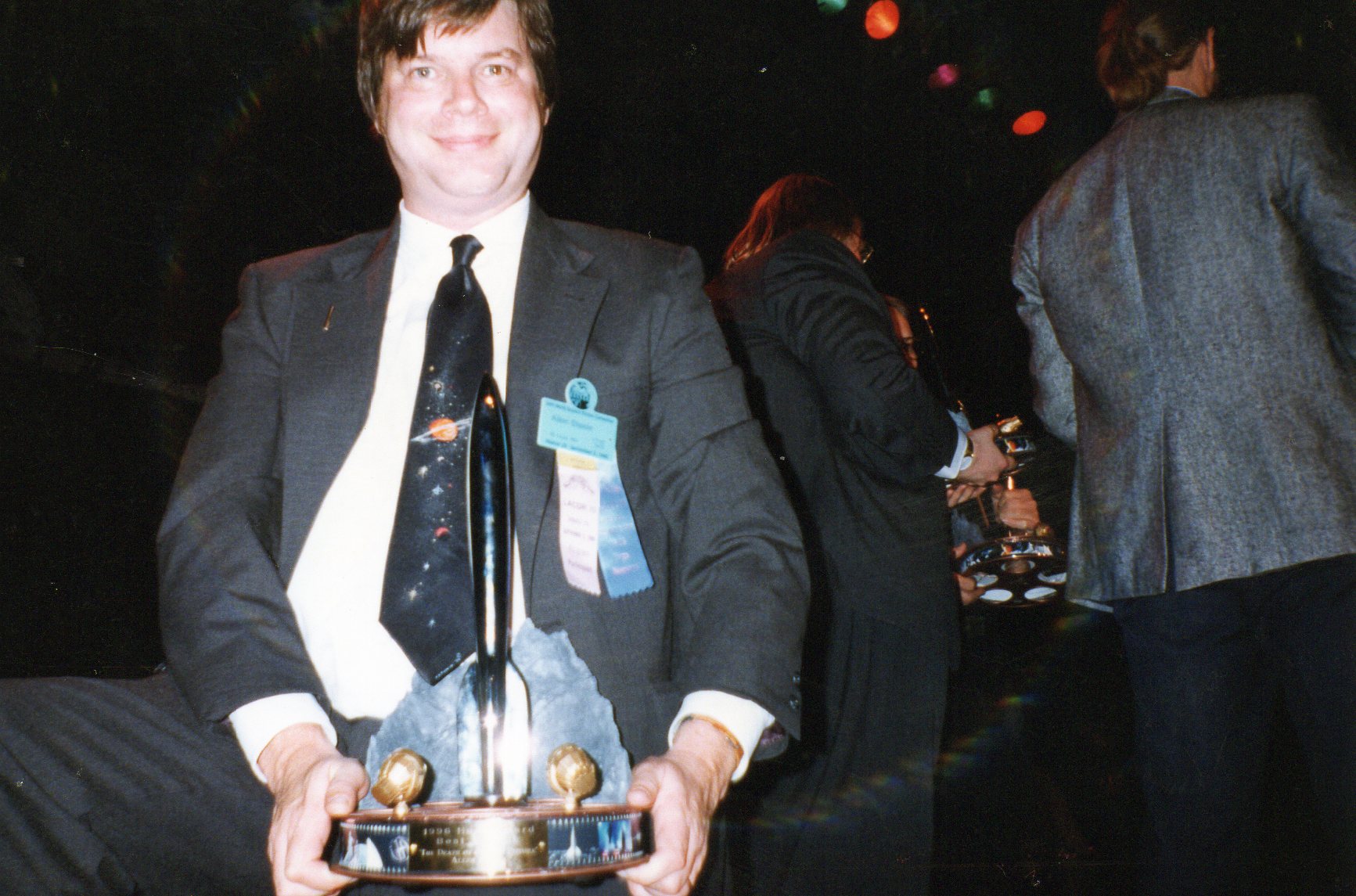 Allen Steele with Hugo for “The Death of Captain Future.” 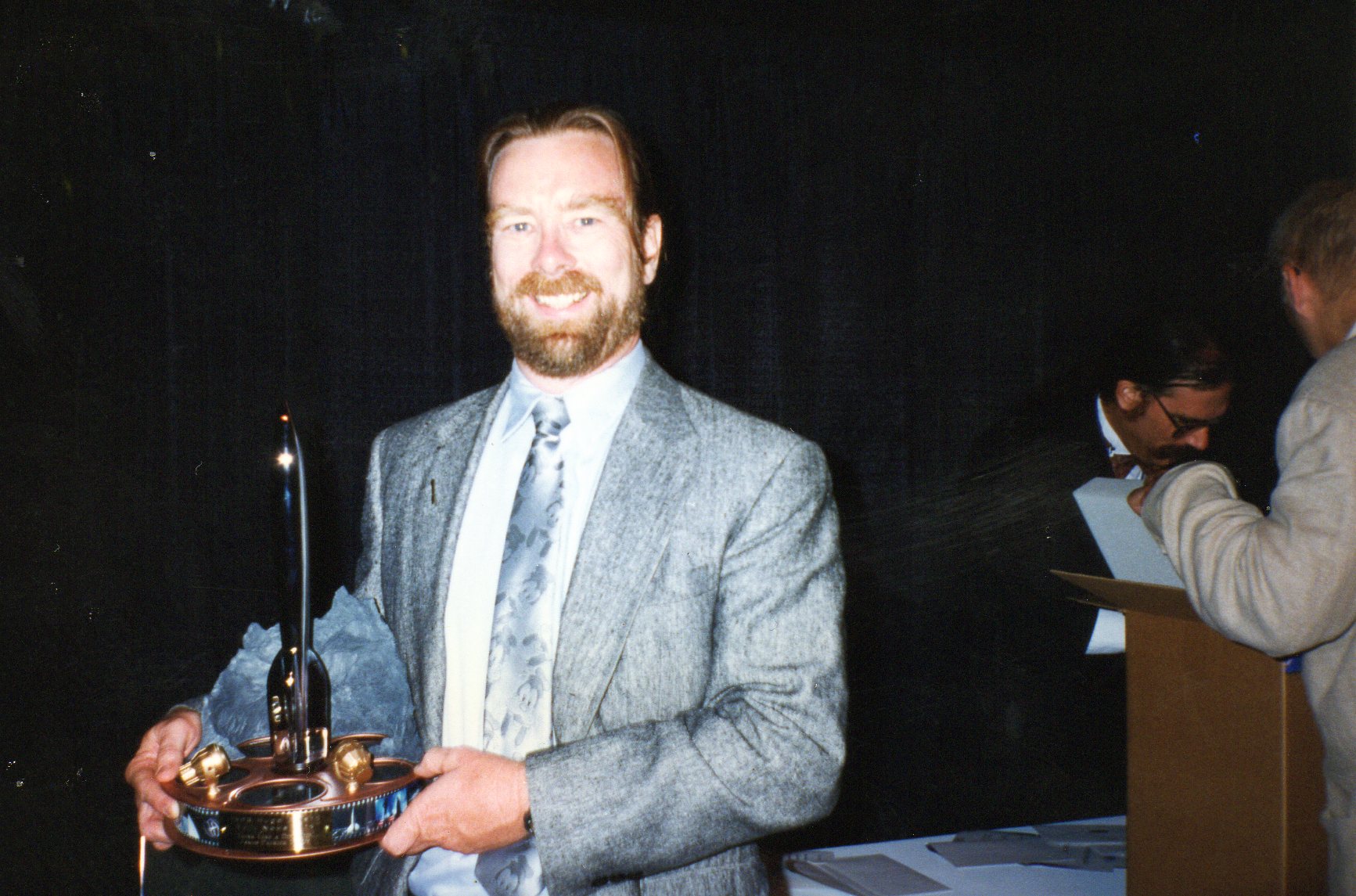 James Patrick Kelly with Hugo for “Think Like a Dinosaur.”
LoneStarCon 2, 55th World SF Convention, San Antonio, TX, Aug. 28-Sept. 1, 1997
Tangent was a print magazine in 1997 and was up for its first Hugo as Best Fanzine. It lost on the last round by 7 votes. I had a terrific time nevertheless, as the smattering of photos below will attest. 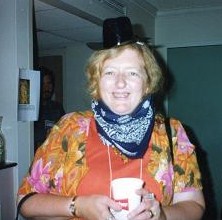 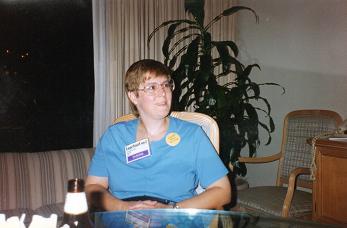 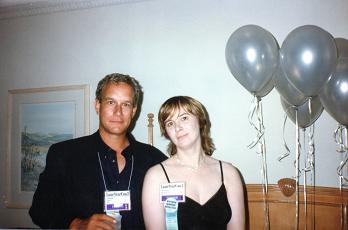 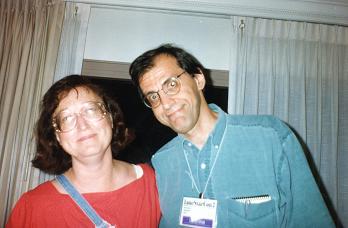 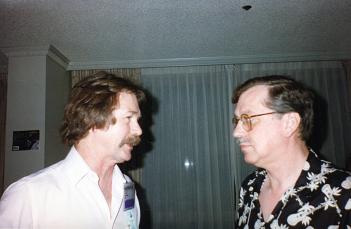 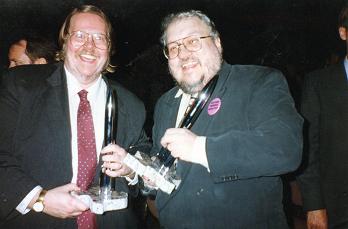 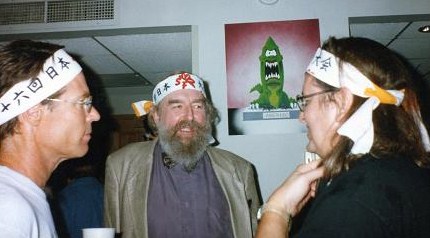 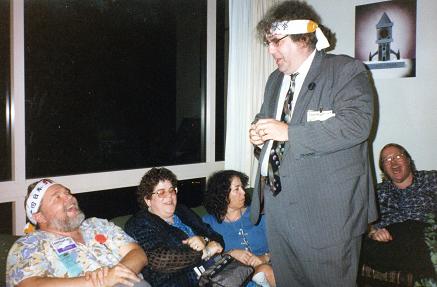 (Left: Kim Stanley Robinson, Michael Moorcock, Bruce Sterling — Right: Walter Jon Williams, Nina Kiriki Hoffman, Leslie What, Scott Edelman, Gardner Dozois. Scott must have told a “guy” joke, because Walter and Gardner are beside themselves while Nina is feigning a smile with her eyes closed and Leslie is watching Gardner guffaw.) 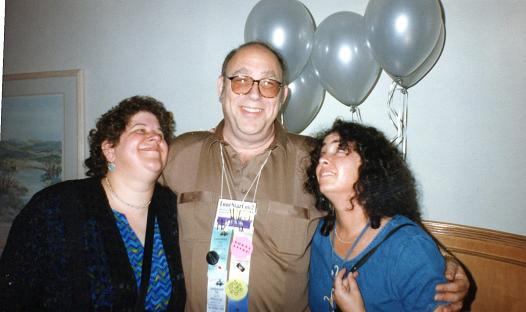 It’s now clear what Nina and Leslie were thinking of while Scott was telling his joke. Honestly, has Mike Resnick no shame? Must he flaunt his groupies at every turn? It just has to be all those Hugo loser rockets (well, he has won a couple) he weighs his name tag down with. I guess wimmin (as Mike spells the word) are just attracted to shiny objects…  Lord help us at this year’s Worldcon in Chicago. Unbelievable as it may seem, Mike Resnick is this year’s Worldcon Guest of Honor. Will there be any female companionship left for the rest of us single guys with Bwana on the loose? How about some Occupy Bwana in Chicago buttons guys?
And Now for Something Completely Funny…
A Tangent Blast from the Past
The setup to the graphics that follow:  In between the 1996 and 1997 worldcons, Tangent published its Spring 1997 issue, number 18 (108 pp.). The cover is below. Gordon Van Gelder had taken over as editor of The Magazine of Fantasy & Science Fiction. I have a strong aversion to “mainstream” fiction (i.e. fiction with no speculative content) seeing print in any genre magazine. I had read several under Gordon’s editorship (not many, but enough) and decided to have some fun at his expense in regard to this matter of concern to me.
I decided to devote an entire page of that Spring 1997 issue to a fake Public Service Announcement (PSA) in order to express my dislike of “mainstream” stories in genre magazines, and who my culprit du jour was. It took the form of the then rampant television PSA’s warning kids away from drugs by showing eggs frying in a skillet with the tag line: “This is your brain on drugs.” After 15 years I still find myself chuckling out loud for two reasons: that I had the sack to do it in the first place, and that I still think it’s hilarious.
So copies of this Spring issue were sent to my hundreds of subscribers around the world, and to all of the major magazines–including F&SF. Skip to early Fall 1997 and I’m at the worldcon in San Antonio, TX and am up for my first Hugo. Am scared to death and can’t think of anything else despite every mental trick I know. Who, then, do I run into in the lobby of the hotel right off but Gordon. We catch each other’s eye. I hasten up to him, hope my smile looks genuine (which it is, but I’m so nervous and excited about everything), and we shake hands and say hello. The first thing I blurt out had something to do with the faux PSA. He laughed, said he got a kick out of it too, and that it was okay. I was greatly relieved, to say the least, because Gordon really is such a nice guy. We chat for a minute and when I’m comfortable that everything is cool I ask someone to take a picture of me and Gordon. Gordon smiles broadly and says sure. The camera clicks, I say I’ll see Gordon later, that I have to check in. When I get home and get the pictures developed, I see, not able to not chuckle, that when Gordon and I were shoulder to shoulder in that photo he had put his hand behind my head with his first two fingers in the V symbol. Ha, ha, I thought. Very funny. No wonder Gordon had such a cat-who-swallowed-the-canary grin on his face. Being an honorable sort, I ran that photo in a future Tangent, along with other worldcon photos. We were even. I got him, and I let everyone know he got me–all in good-spirited fun. Fair enough.
So a couple of years ago I get an email from Gordon asking if it would be okay if he posted that “V” photo in some private (I think) online group he belonged to. I said sure, what the heck, knowing full well someone would be getting a chuckle at my expense. But that’s the way it goes and it was harmless enough. But now Gordon was one up on me, you understand. So to even the score, below you will see the PSA as it appeared in Tangent #18, Spring 1997. 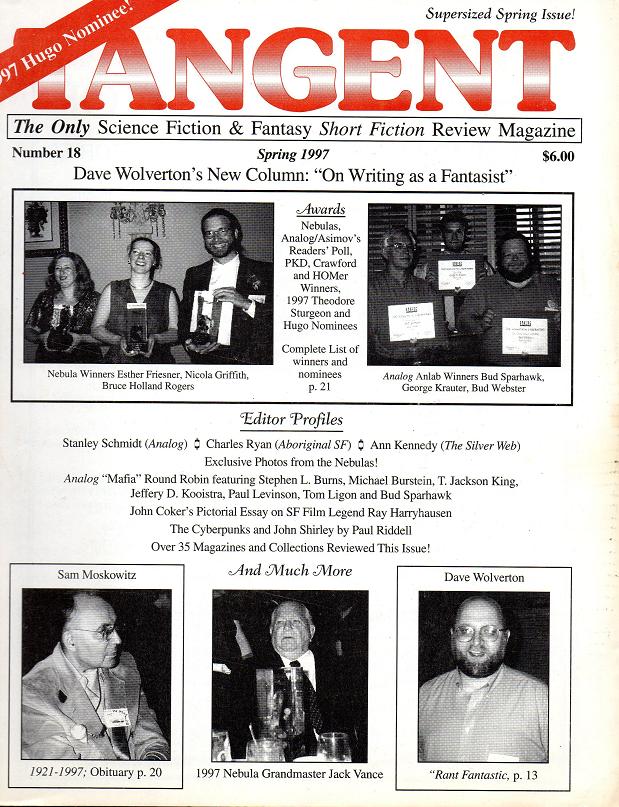 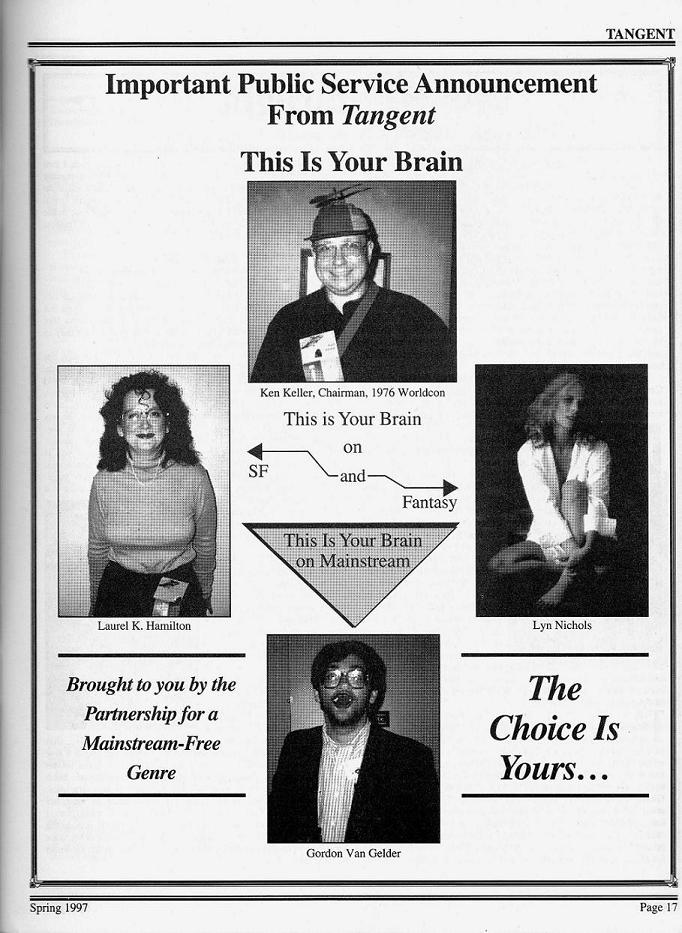 In case you can’t discern the detail in the GVG photo, the original is below, taken at the 1997 Kansas City Nebula Awards weekend in one of the party suites. Someone had left a box of Halloween odds and ends on a table for our amusement. Gordon took a liking to some large, red, wax lips. The bottle of beer in his hand has been left in for this specific showing to graphically illustrate the harm large, red-wax lips and alcohol might do, leading impressionable, first-time, SF-reading, teenage yutes to actually enjoy reading the pollutant of mainstream fiction in their SF/F magazines. They’re young and ignorant, with brains full of mush.  Red-wax lips and alcohol are for ersatz chic (the obligatory 3-day growth of beard, well-maintained, is the proof in the pudding), New York (well, New Joisey) editors only, and are a seductive gateway combination for the innocent, one to be avoided at all costs. Parents take note and teach your children well. It’s not a pretty picture. 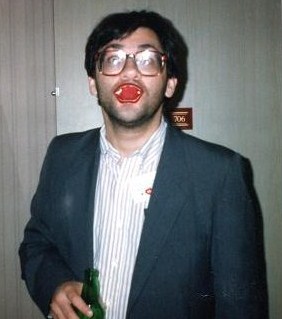 (PSA photo credits:  Ken Keller and I have been friends since around 1979, when I moved back home to Kansas City and found the local SF club. I don’t recall when this photo was taken, but it was many years after his chairmanship of the 1976 worldcon, most likely at one of our annual ConQuests. The propeller beanie is symbolic of early, stereotyped SF fandom as being of the nerdish variety, and is a recognizable sign that one is a trufan of SF/F. The photo of (now famous) Laurell K. Hamilton was taken at an Archon (St. Louis) in, I believe, early October 1996. The photo of Lyn Nichols was a thank you from her for my giving her a place to crash for a week or so until she could find an apartment of her own in KC. She was a friend of others in our local SF club, KaCSFFS.)
Afterword
Gordon and I have remained friends over the years (which will no doubt drive some of his liberal friends crazy), and I hope he takes this pictorial look-back at a point in time some 15 years ago in the fun-loving spirit in which it was solely, and originally, intended, as he and I have both had a lot of innocent fun with it. He is a terrific editor and I really do love receiving F&SF in the mail every other month. Thank you, Gordon.