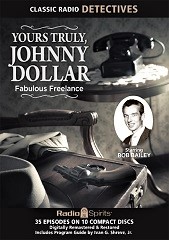 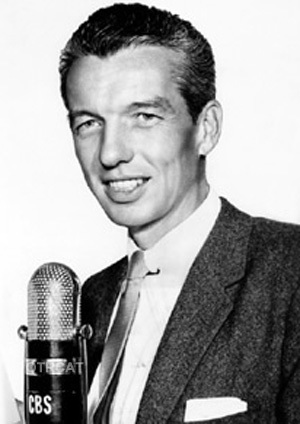 [Editor’s note: Since Tangent Online will be in the middle of a new look changeover occurring sometime this week, with the slight possibility it will be offline for some indeterminate time (though hopefully not) I have decided to post this Saturday’s OTR episode early (Wednesday). And since I will be in Chattanooga for Libertycon this weekend without the laptop, I asked Asimov’s author and Old Time Radio fan Pete Wood to fill in while I am away. Pete has selected and written the notes for this episode. Thanks, Pete.]

Radio historians agree the era of classic radio programming ended on September 30, 1962 on CBS radio. The last episode of Yours Truly, Johnny Dollar finished at 6:35 p.m. followed immediately by the final episode of Suspense.

Johnny Dollar first aired February 18, 1949 (following a one-shot audition episode in December of 1948). It originally had an unremarkable format. Dollar was a tough talking private investigator. Three actors—Charles Russell, Edmond O’Brien, and John Lund—played Dollar until the initial incarnation ended in September of 1954.

After a one year hiatus the show returned with a new star and a new format. Bob Bailey (1913-1983, photo top right) played Dollar as a freelance insurance investigator. In October 1955 the show became a five night a week serial, running from eight to eight fifteen p.m. weekdays.

Radio veteran Jack Johnstone (1906-1991, photo at left) took over production and directing duties, writing many of the episodes.

In 1956 the show changed to a half hour format and ran on Sunday afternoons. Bob Bailey played Dollar until November 1960 when the network fired him when he refused to relocate from Hollywood to New York. Bob Readick portrayed Dollar from December 1960 until June 1961 with Mandel Kramer taking over the role until the last episode.

Bob Bailey was the heart and soul of the series. Of the 827 episodes, Bailey played Dollar for 484. Second place O’Brien, by contrast, only appeared in 103 episodes. Most fans consider Bailey the best Johnny Dollar—the real Johnny Dollar.

The show typically began with a phone call from some insurance executive who wanted Dollar to investigate some unusual claim. Dollar in the course of the series traveled all over the United States and sometimes out of the country. He told the story through flashbacks as he explained each item on his “action-packed expense account.”

He usually looked into fraud, but sometimes, as in “The Midnight Sun Matter,” something intervened. A rather paranoid executive in Seattle summons Dollar and explains the company is afraid a mining syndicate in Alaska is trying to pull a fast one. Seems they want to divert a glacier that has changed course and threatens to swallow up the mine and town. The executive thinks the miners will force the glacier to bury a nonproductive mine so they can collect.

Dollar is skeptical of the executive’s theory, because the executive just has a hunch about the glacier and the mine. The miners actually just kept the insurance company in the loop about their plans to divert the glacier which has suddenly changed course. Fearing the glacier will swallow the mine and the town, they plan to blast a new path.

Johnny calls the fraud theory “far-fetched.” The executive insists the miners could commit fraud with “a few sticks of dynamite.” He asks Dollar, “Why should [a glacier] that’s been following the same path for thousands of years suddenly decide to head for a few million dollars’ worth of well-insured property?”

Johnny gives up trying to reason with the man. He wasn’t born yesterday, but he isn’t the type to give up a paycheck either.

Always game, Dollar boards a two-seater plane where the pilot announces that Johnny is co-pilot. And, oh yeah, the plane is full of TNT for that glacier problem. Dollar comes to grips with his situation and then the pilot has a medical emergency and Johnny has to take over flying the plane.

Not your usual episode. Not as much humor either, aside from a couple of wisecracks with the clueless insurance executive in the first scene. But, it does have edge of your seat excitement as the show cuts back and forth between Johnny and the sick pilot and the miners at their little airport as everybody tries to figure out how to land the plane with its novice copilot and cargo of explosives.

As in many radio dramas, it’s interesting to look back with twenty-first century eyes. Everybody accepts without question that it’s okay to blow up a glacier in the wilderness for mining interests. It’s not too hard to imagine CNN covering the story today and making the miners out to be anti-environment bad guys.

The highlight of the careers of both Johnstone and Bailey was unquestionably Johnny Dollar. Johnstone died in 1991 and the LA Times mentioned Johnny Dollar, “the last of the big-time network melodramas,” in the first line of his obituary. Beginning in the early 1930s Johnstone worked on classic radio programs from Buck Rogers to The CBS Radio Workshop to the Adventures of Superman. He struggled with budget constraints as the networks switched their resources from radio to television. He noted that in the 1940s the networks budgeted actors at $5,000 per week, but reduced salaries to less than a thousand dollars a week in the 1950s. When Johnny Dollar went off the air, Johnstone retired. A supporter of the spoken word until the end, he asked that donations after his death be given to the Santa Barbara Chapter of Recordings for the Blind.

Bailey also had a long radio career, beginning in the early thirties and ending with Johnny Dollar. He starred in programs ranging from Let George Do It and Meet Corliss Archer, among others too numerous to name. He took a stab at films, but never got above bit parts in nine movies from 1943 to 1962. In his last role, a reporter in 1962’s The Birdman of Alcatraz (starring Burt Lancaster), the studio cut most of his footage and actually dubbed his voice in the final product—a cruel ironic twist for one of the great voices of the era. Bailey struggled with alcoholism for many years, but overcame that problem. He died in Lancaster, California in 1983 at age seventy.

Yours Truly, Johnny Dollar, is the legacy of Bailey and Johnstone. And, it’s a good one. Sit back and enjoy “The Midnight Sun Matter.” 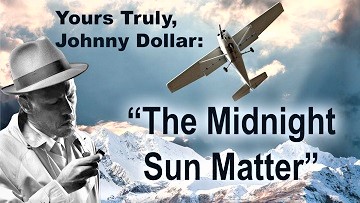 {Afer listening to this exciting episode of Yours Truly, Johnny Dollar, the neighborhood gang wanted nothing more than to prolong their insatiable desire for adventure than by meeting at the corner drugstore where they would find the latest issues of their favorite SF magazines. Astounding SF (1930-present, now Analog) had become a sure buy for a number of years, and with intriguing covers like the one below it was no wonder why. It was a monthly in 1958. The Magazine of Fantasy & Science Fiction (1949-present) was by now a major player and considered in the top tier of SF magazines, though still a relative newcomer. Its mix of more traditional SF fare told with a more literary style raised eyebrows along with sales. It too was a monthly in 1958. Galaxy (1950-80) was also raising eyebrows in genre circles with its editorial vision geared toward exploring themes and subject matter not traditionally found in SF magazines, thus encouraging newer writers to come play in SF’s backyard, and established writers to pen tales they couldn’t have in the past. It was a monthly as well in 1958.] –Dave Truesdale 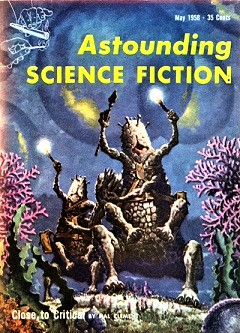 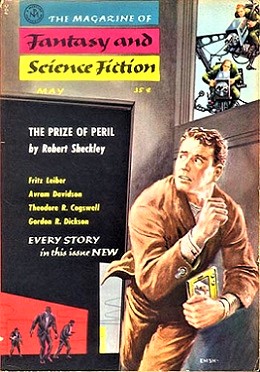 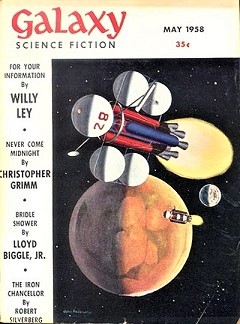