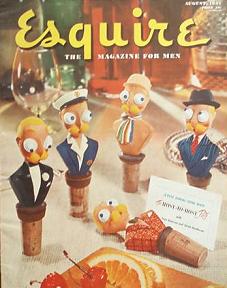 X Minus One (1955-58) aired Nelson Bond’s “Vital Factor” on November 30, 1955. Dimension X (1950-51) aired it earlier on August 15, 1951 though we offer the X Minus One version here. First published in Esquire‘s August 1951 issue, “Vital Factor” is a moralistic tale concerning one Wayne Crowder, ultra-rich and successful businessman who, for entirely selfish and egotistical reasons, desires to build the first spaceship, to be the first man in history to fly in space. Money is no object to him, nor is crushing all those who oppose him. He is a cruel, cold, determined man, viewing sentimentality as a weakness.

Nelson Bond (1908-2006) wrote primarily in the 1940s and 50s. He wrote in a variety of genres (SF, detective, western), including first radio and then television. In 1998 he was acclaimed an Author Emeritus for Lifetime Achievement by the Science Fiction and Fantasy Writers of America. “Vital Factor” was adapted for television for ABC’s Tales of Tomorrow and was broadcast on October 26, 1951. It starred well known actor Lee J. Cobb in the role of Wayne Crowder.

But just what is the “Vital Factor” and how might it reveal itself to Wayne Crowder? Listen now to this tense story of a man’s obsession and what he learns about what money can…and can’t buy.

(Ed. Note: I wish to thank Nelson Bond’s son, Christopher, for supplying the original publication and date for “Vital Factor.” Thank you, Chris. Anyone wishing to discover more about the works of Nelson Bond will find much of interest, not least of which are several videos of him doing readings, at his website.)