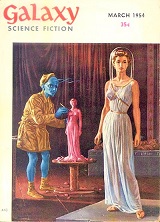 X Minus One (1955-58) aired “The Merchants of Venus” on July 18, 1957 as its 103rd episode. It first appeared as a short story by A. H. Phelps in the March 1954 issue of Galaxy (cover at right). As far as I can determine this was the author’s sole genre story. Consensus among radio historians has set the number of X Minus One episodes at 126 (counting rebroadcasts), with 119 in circulation. The show was cancelled on January 9, 1958 following its 126th episode, and was the longest running SF show in radio history (which isn’t saying much when you realize it didn’t make it through three years, while many other radio shows had successful runs of 8, 10, and even 20 years). It was an extension, or revival if you will, of Dimension X, which ran from April 1950 through September 1951, airing 50 episodes. The first 15 X Minus One shows were remakes of Dimension X adaptations of stories first appearing in Astounding Science Fiction, but after that the remaining shows were dramatizations of stories from Galaxy. For those trying to keep a chronology of the important adult SF series’ straight, here’s the breakdown:

“The Merchants of Venus” asks an important question as Mankind seeks to inhabit new worlds. What kind of people will it take to overcome the initial hardships, and what will draw them to other worlds? In A. H. Phelps’ story, Earth has a hard time maintaining a colony on Venus, as more of the new colonists want to come home than are being sent out. Unless Venus is to be abandoned, a solution to the problem must be discovered, and quickly. The answer has to do with the psychology of the pioneer, something rather basic but not to be overlooked, and beneath the surface asks us to question a certain aspect of our human nature. See if you can guess what turns the tables and gets more colony ships from Earth headed to Venus than the other way around (I guessed hookers but was wrong), in this short but revealing story.

{One trip to the local newsstand was never enough for the neighborhood gang when it came to buying their favorite SF magazines. Their second trip in July of 1957 bore fruit (as well as three magazines all with an “F” in their titles). fantastic (1952-80) became a monthly in February of 1957 and through most of its long run, though in mid-1965 it reverted to a bi-monthly, then in 1979 and 1980 ended as a quarterly. Fantastic Universe (1953-60), while not as long lived, still provided exciting, entertaining fare from well known authors, witness the names on the cover below. In July of 1957 it was a monthly. The Magazine of Fantasy & Science Fiction (aka F&SF, 1949-present) was truly finding its voice by July of 1957 and its newer style of stories was beginning to resonate with an ever-maturing SF audience, this new style of fiction being reflected in many of its covers and the new artists that had begun to appear in the field, of which Mel Hunter’s work (signature robot cover below) was but one example. More about Mel Hunter below. F&SF was a monthly in July of 1957.} 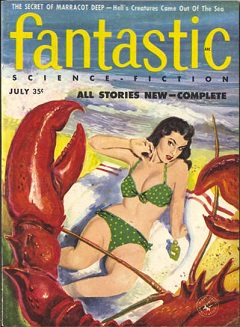 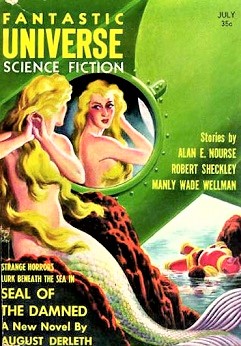 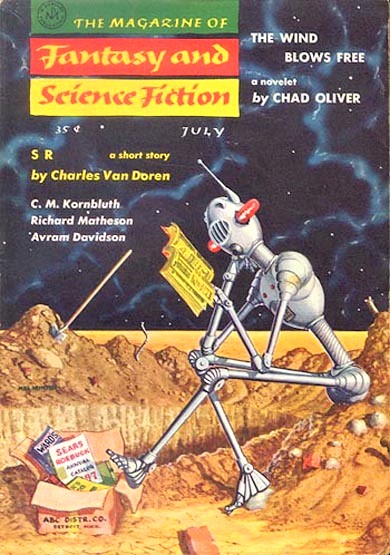 (Mel Hunter [1927-2004] is one of those very fine SF artists who, for one reason or another, I feel is underappreciated. He worked from the early 1950s into the early 1970s, doing magazine covers for a variety of publications including F&SF, Galaxy, If, Fantastic, Fantastic Universe, and others, with the majority of his magazine cover work split between F&SF and Galaxy. Hunter also did prolific interior illustrations for the magazines as well as numerous book covers. Where F&SF is concerned, while he did varied types of covers for the magazine, his “robot” covers became his trademark, or signature cover art. Editors from Anthony Boucher, Ed Ferman, and through Gordon Van Gelder showcased his cover art, especially his clever robot covers. From the very first one for the October 1955 cover until the last for the May 2003 cover, Mel Hunter would do a total of 16 robot covers for F&SF. Along with the one above for July of 1957 (the second) and the seven below, half of his robot covers are represented. Looking at all 16 covers earlier in the week it became apparent that each of them has the background of a time in humanity’s future when some cataclysmic event (or possible mass exodus off-world) has left the Earth a barren, broken place, a world of crumbling buildings, assorted artifacts, craters, and unrelenting desolation. Amidst this ruin the robot contiues to live and wander, going about its programming in various ways and exhibiting very human-like qualities: watering a lone flower, listening to music, trying on festive clothes, and other activities we ascribe to humans. At times the robot is inquisitve, playful, caring, thoughtful, and even artistic. (My favorite of those shown below is #4, with the robot taking up palette and brush to capture a desolate landscape on canvas; but notice what it is painting as opposed to what it sees–a landscape from the past and how it remembers it buried deep within its stored memory. Brilliant.) In the end, however, despite the cleverness and insight Hunter brought to his lonely robot, we see it doing naught but going through pre-programmed motions wherever the shifting winds of a dead planet take it. But through these covers Mel Hunter spoke to us, telling us something about ourselves through the metallic creation we had endowed with a little bit of ourselves.) 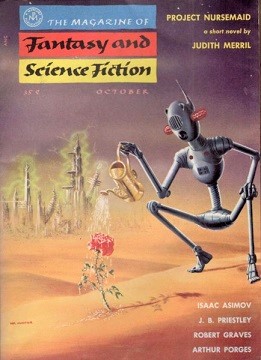 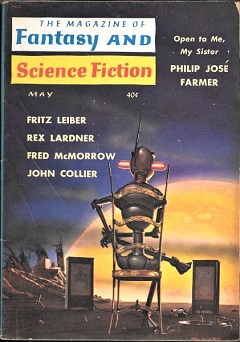 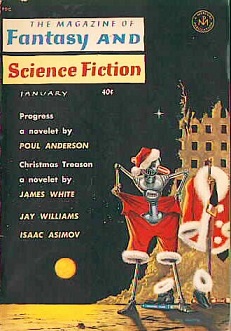 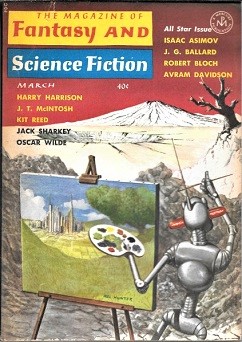 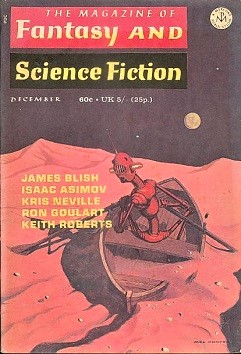 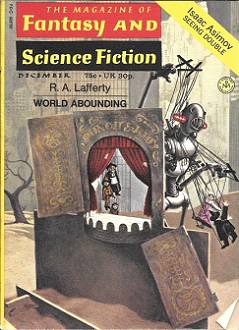 [#7 below: May 2003, the 16th and last Mel Hunter robot cover. From the December 1971 cover above until this cover there was nothing from Mel Hunter, a gaping hole in his output of over 30 years. Curious as to how this cover came to be and why it appeared seemingly out of the blue, yesterday (Friday) I wrote F&SF publisher Gordon Van Gelder, who was editor at the time of this May 2003 issue. He was kind enough to respond quickly, knowing my deadline. I thank him for his reply for it answers two questions: how the cover painting came to be, and why the 30+ year gap in work from Mel Hunter. With permission, I quote:

“Robert Weiner of Donald Grant Books put me in touch with Mel. I don’t remember exactly how the 2003 cover came about, but most likely, Robert convinced Mel to paint another robot cover and then one of them contacted me about running the piece on F&SF, which I was glad to do. Mel suffered from Parkinson’s Disease so his output in his later years wasn’t nearly on the level of what he produced in his heyday.

“I do recall he had worked out a backstory for the robot (contrary to Mel’s Wikipedia entry, I’m pretty sure the covers all depict the same one robot). If I remember rightly, the robot is continuing on after humanity has become extinct.”

Fortunately, Mel lived long enough to see his final work published. He died of bone cancer less than a year later on February 20, 2004.] 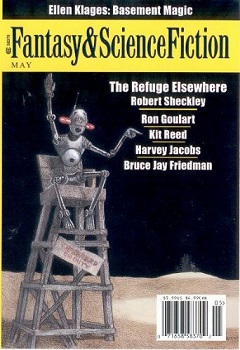