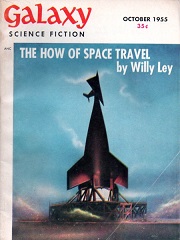 X Minus One (1955-58) aired Stephen Tall’s “The Lights on Precipice Peak” on March 13, 1957 as the show’s 93rd episode. The show was cancelled on January 9, 1958 following its 126th episode, and was the longest running SF show in radio history (which isn’t saying much when you realize it didn’t make it through three years, while many other radio shows had successful runs of 8, 10, and even 20 years). It was an extension, or revival if you will, of Dimension X, which ran from April 1950 through September 1951, airing 50 episodes. The first 15 X Minus One shows were remakes of Dimension X adaptations of stories first appearing in Astounding Science Fiction, but after that the remaining shows were dramatizations of stories from Galaxy.

Stephen Tall (1908-1981) saw his first published SF story, “The Lights on Precipice Peak,” appear in the October 1955 issue of Galaxy. A short story, it tells of mountain climbers, or just plain outdoor hikers, who see strange lights near Wyoming’s Precipice Peak and set out to discover what they are. As you might assume, aliens are involved. But are they here plotting an invasion as advance scouts? Are they merely observers for those who sent them and are thus benign and of no threat to us? Or the opposite? How and why they are here is the story, and while not a tale of war or tentacle-waving aliens, it does have its moments of strife and tension–along with a nice little twist at the end that, though we’ve seen it before since the story was written, we would do well to remember that it was penned 60 years ago and was at least a little fresher back in 1955–in the midst of the Cold War, when suspicions of the Other ran very high, and real or imagined threats could conceivably come from within, or from outside the United States. It was easy to believe aliens (or communists) could be found almost anywhere.

Stephen Tall, for those unfamiliar with the name, was the pseudonym of Compton Newby Crook. With his death in 1981, the Baltimore Science Fiction Society organized the now well known Compton Crook Award for the best first SF, F, or Horror novel of the preceding year. First awarded in 1983 for best first novel of 1982, it is presented each Memorial Day weekend at Balticon, and comes with a $1,000 prize and GoH perks for two years for the winner. The Compton Crook Award website, with a list of all past winners, is here.

{After listening to this episode of X Minus One and its tale of aliens, our young neighborhood aliens made a special trip to the corner newsstand the next day after school to read about more aliens, and among the many selections they had to choose from were the three magazines showcased below. Astounding SF was edited by the legendary John W. Campbell, Jr, and maintained its monthly schedule in 1957. F&SF also hewed to its long-standing monthly schedule in 1957 and was at that time edited by Anthony Boucher. March of 1957 saw Venture SF‘s second issue (its first being in January). It was a bi-monthly and would last but ten issues. It was founded by F&SF publisher Joseph W. Ferman, who envisioned the magazine as a companion to F&SF. The editor was Robert P. Mills throughout its ten issue run. Boucher would leave as editor of F&SF in August 1958 and Mills would end up with the job in September, though only after C. M. Kornbluth was named editor but then died unexpectedly of a heart attack, at which time William Tenn took the job but then left almost immediately, leaving the position open for Mills. So within a month’s time in 1958, from August-September, F&SF technically had four editors.} 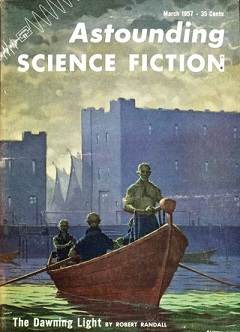 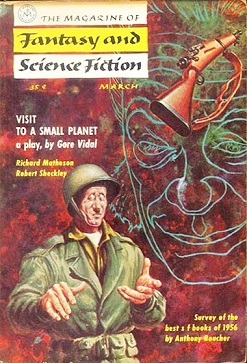 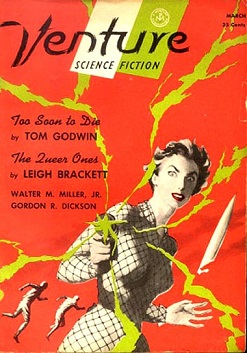