X Minus One (1955-58) aired “The Discovery of Morniel Mathaway” on April 17, 1957 as its 97th episode. This short story by William Tenn (1920-2010) originally appeared in the October 1955 issue of Galaxy, and is a good example of Tenn’s penchant for satire, this time skewering self-obsessed, wannabe artistes via an egotistical painter with the monicker of Morniel Mathaway. Mathaway has convinced himself that the Artistic Elites are just too stupid to appreciate his revolutionary art, which primarily consists of black smudges on canvas. What a great dig at certain art critic types who see things in art which aren’t really there. Unless, that is, one ties common sense into gordian knots with tortured semantics, convincing your lying eyes they are not seeing what they are seeing. The stage set, Tenn then introduces an art historian from the year 2487 who has returned to meet the great Mathaway, whose art is now famous. Mathaway is beside himself with joy, of course, feeling vindicated. But then Tenn drops a rather large fly in Mathaway’s egotistic ointment, and it is this upon which the tale hangs and Mathaway’s legacy is decided. Several subtle (and not so subtle) truths are revealeded here and are what make the story memorable–and a necessary lesson in humility for those who believe themselves in some way superior to others, especially perhaps in the arts.

Along with Tenn’s short story, other fiction in the October 1955 Galaxy included Robert Sheckley’s novelette “A Ticket to Tranai,” F. L. Wallace’s novelette “Bolden’s Pets,” Evelyn E. Smith’s novelette “A Jack of No Trades,” Stephen Tall’s short story “The Lights on Precipice Peak,” and one of the most famous short SF stories of all time, Cordwainer Smith’s “The Game of Rat and Dragon.”

William Tenn (real name Philip Klass–not the UFO debunker of the same name), has been hailed by many a critic as one of the truly great satirists in the history of SF. Theodore Sturgeon said of Klass: “It would be too wide a generalization to say that every SF satire, every comedy and every attempt at witty and biting criticism found in the field is a poor and usually cheap imitation of what this man has been doing since the 1940s. His incredibly involved and complex mind can at times produce constructive comment so pointed and astute that the fortunate recipient is permanently improved by it. Admittedly, the price may be to create two whole categories for our species: humanity and William Tenn. For each of which you must create your ethos and your laws. I’ve done that. And to me it’s worth it.”

For those desiring to learn more of this complicated, highly intelligent university professor and his views on a variety of subjects, including feminism of the 1970s, political theories, and his studied opinion that mankind is tired of freedom all over the world, I point you to my interview with him from April of 1975. It’s rather long, but utterly fascinating. One cannot claim to be well read in science fiction without having read William Tenn.

(For those wishing to read “The Discovery of Morniel Mathaway” as it appeared in the October 1955 Galaxy, simply click on the story’s title page below–it will take you to the proper site. To turn the page forward simply set your pointer to the page on the right and click, or to the left for a preceding page.) 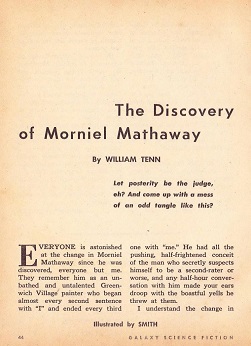 {Like clockwork, the neighborhood miscreants headed for the corner drugstore for their regular fix of SF magazines, jazzed from that week’s X Minus One episode. Everything was going well when out ofthe blue a…girl from one of their junior high school classes showed up, stood beside them also gazing at the lurid covers, and without so much as an excuse me or howdy do, leaned over, grabbed one, twirled around, headed for the cash register, and was gone. One of the older boys secretly wondered if she would show up again next week….  That unprecedented encounter over in a flash, the gang then selected their own magazines from an alarming array of possibilities, three of which are shown below. Infinity was on an irregular schedule and published only seven issues in 1957, Fantastic Universe held to its monthly schedule, and Imagination remained faithful with its bi-monthly schedule.} 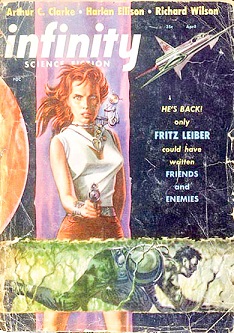 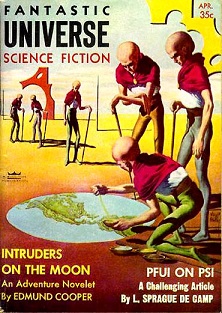 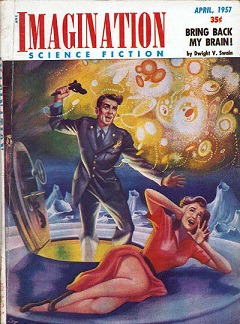